Can you identify a book where brains are harvested and used as computers, bringing them back to life and driving them insane?

It's a science fiction book from the seventies or likely earlier. I might not remember it entirely correctly but the premise was that after someone dies their brain is harvested and wired into a computer to be used as a supercomputer. No one realizes that this actually brings the brains back into consciousness, the assumption was that being dead they are just being used as biocomputers. The huge pressure to solve mathematical problems drives the brains insane. The main character wakes up in this situation but is somehow able to push the pressure aside. Through telepathy he's able to find another brain in this situation and eventually somehow transfers his mind back into the body of a regular person and escape.

Any help in identifying this would be appreciated - I would love to read it again.

As in this answer, this is probably The Cybernetic Brains (1969) by William F. Jones. 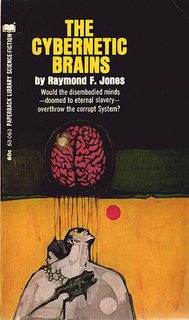 It was a supercivilization, a Utopia. At its core were the Cybernetic Brains, brains taken from geniuses who were promised they would live forever.

Then engineer Al Demming discovers the truth accidentally, the terrible truth transmitted to him by one of the brains. The brains are in reality slaves and in terrible torment. It was now up to Demming to stop the inhuman practice.

Just when he planned to make the announcement to the Governing Board, Demming learned that the Board knew about the hideous living death. What was the real reason behind the facade? How could he convince the Board to suspend the system before the Brains revolted and destroyed the world?

Not the answer you're looking for? Browse other questions tagged mind-control story-identification or ask your own question.

11
Can someone identify this book, where children are bred for specific jobs?
27
Can you identify this book or series in which all humans are in hell?
23
Seeking book where disembodied brains run factories
19
man forced to compete in contest where if you win you are killed and you body is used for reproductive material
8
90s (or earlier) book: humanity split between 3 factions (China, America, Russia) which colonized space, and have telepaths/telekinetics individuals
13
Identify a book series, where order fights against chaos and they travel back in time
12
Sci-Fi Novel: Aliens inform scientists of the origin of the universe and life driving them insane
18
A TV show involving brains being sucked out and launched into space