Could a TARDIS exterior have transparent glass?

Since a TARDIS is "bigger on the inside", windows pose an issue. How does one look inside of something that is bigger inside?

With a properly functioning chameleon circuit, the exterior of the TARDIS can change into different forms. Could it turn into something that has a window on the side? Could you then see into the TARDIS from the outside? What if the whole ship was a glass cube; how would that look from an external perspective?

I'd imagine it would look like the below image with a window in it. Oh, thats just an open door. Same thing right? 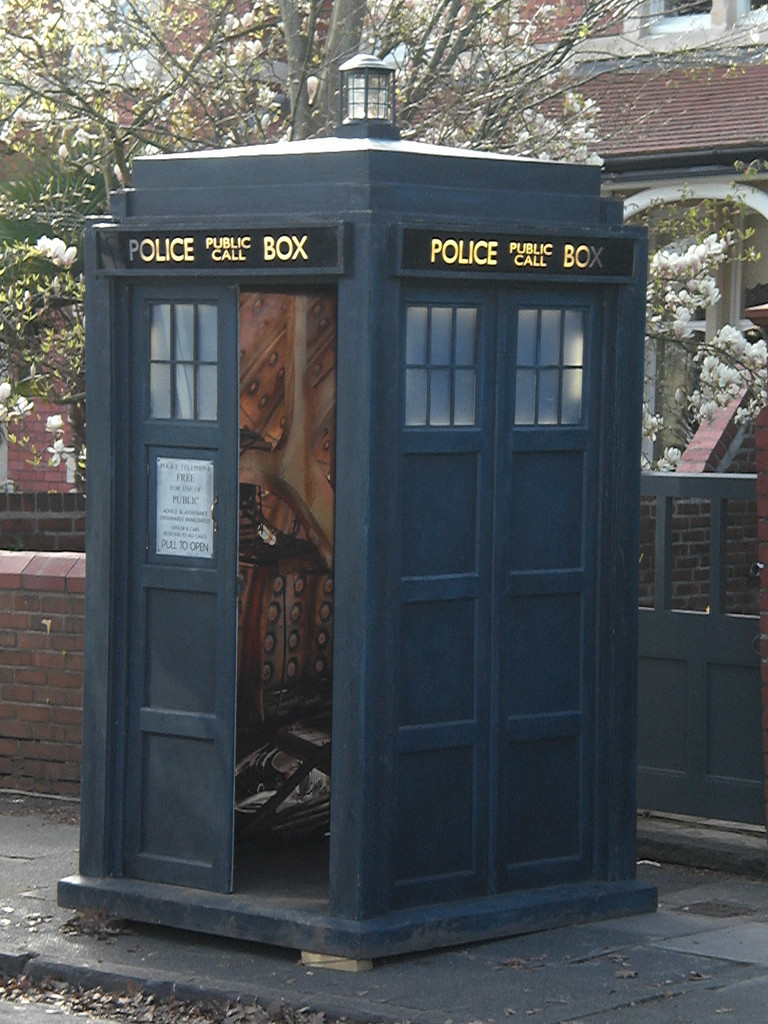 The TARDIS's exterior is, as they call it, an "outher plasmic shell" (I believe that that is the thing that allows the shape changing chameleon Circuit) that contains a nexus to the TARDIS dimension. Like the Eleventh told Rory, the TARDIS is another dimension, so I believe that this image: 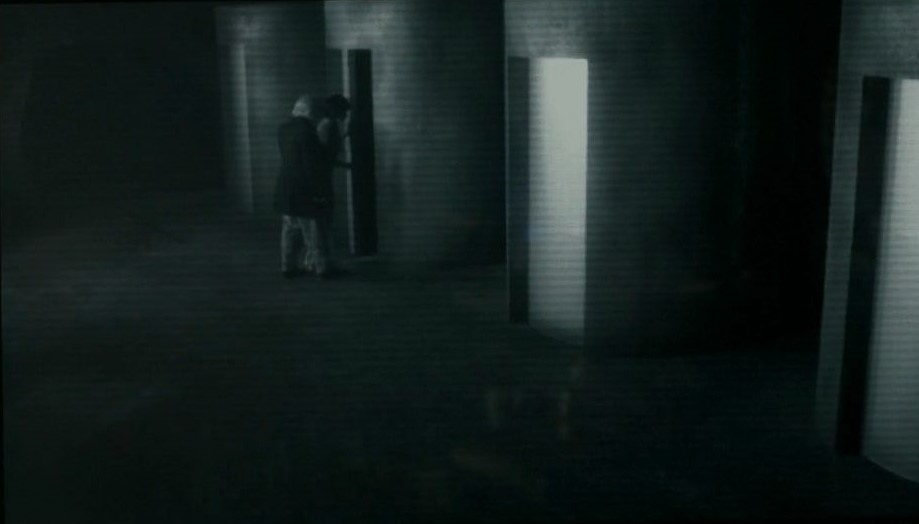 It's just the wrapper (with the chameleon circuit offline) of the, let's call it, "The Extra-Dimensional Nexus" with our 3 dimensional existence to the "Dimensionaly Trascendental" TARDIS. You know, like a bridge.

Baker era who had an episode where he explains the Tardis bigger on the inside as two cubes, the outside on smaller but closer than the bigger and farther cube. If we expand on this concept, it's relativity, er, perspective. A glass tardis would show the insides as small and far away, with some visual distortion.

So if the chameleon circuit decided to make the TARDIS walls look like a window, they would look like a window and looking through the window would show whatever the chameleon circuit decided to show. The TARDIS walls would not actually turn in to glass, so there is no need to worry about what the view through that glass would look like.

We can construct a solution to this problem mathematically using geometry.

Two lines intersect in a point.

Two planes intersect in a line.

Two spaces intersect in a plane.

In all these cases, the objects in question must exist in the next higher dimension:

The two intersecting lines must lie in a plane.

The two planes must lie in a space.

The two spaces must lie in four dimension space.

Now I think we can agree that there is space both inside and outside of the TARDIS, and that they are disjoint when the door of the TARDIS is closed. In order to transit between the two spaces they must intersect, and we see transit occur when the door is open; one crosses the threshold between the outside and inside of the TARDIS by moving through the opening roughly where the door was (or slightly behind it). Therefore, the intersection of the two spaces can be seen as the plane parallel to the door's location when shut, perhaps slightly behind where it actually sits when closed.

We see this view in @SFruggiero's answer. Here was are looking through the plane of intersection and thus see the inner space through its connection to the outer space.

This implies something rather different than what some of the other answers suggest. Namely, that if the TARDIS facade was glass, you could only see the interior from one face of the TARDIS (the one where the door was). The other 5 faces (assuming the TARDIS itself was sitting on a glass platform and you could look from underneath as well) would likely appear empty and you would see straight through to the other glass on the other side. And furthermore, by varying the angle at which you look through the face containing the plane of intersection, you could actually see "behind" the area of outside space. That is to say, if you look at an angle of say 80 degrees, you can see further into the side space of the TARDIS in on direction that you can't see from straight on, and likewise 80 degrees in the other direction.

I say "likely" because we don't really know what is inside the facade in normal space. It is probably empty, because the space isn't really needed, the facade only needs to be three dimensional for the purpose of appearing consistent. However, it is also possible that there might be some machinery required for shield generation or for generating the plane connecting the two spaces. Since the entire facade dematerializes it is uncertain whether this even makes sense, as this might imply anything in this outer shell of space would need to dematerialize as well, so I suspect the entire normal space between the walls is actually empty.

Note that this solution is completely consistent with the idea (which if I recall has actually been seen in at least one episode) that anything extending further past the door on the inside can't actually be seen from the outside either. In other words, if the door is actually inset into the TARDIS control room such that some of the machinery or walls extends back on either side of the door further than the depth of the door, they do not extend into normal space; the internal space need not stop at the threshold of the door at all.

Of course, this assumes that there is only a single intersection between the space inside the TARDIS and the space outside. It is possible there are multiple intersections created: for instance, for the shields, as we have seen that the entire facade is apparently penetrable (a la Time Crash) although in my opinion the (out of universe explanation) writers didn't really think things through and realize that a lot of things about the Titanic crashing through the walls of the TARDIS as shown didn't really make sense geometrically. But to maintain the geometrically correct perspective, adding more intersections could result in multiple "windows" into the TARDIS at various intersection points, but they would all be planar surfaces giving the appearance of a "window" in normal space connecting points in normal space to the space inside the TARDIS.

It would exist as a transparent glass, empty cube.

Here's why: The outside and inside of the TARDIS ARE linked by the door, but not one being inside the other. 'Fathers Day' shows this. There is no reason the door couldn't lead to another room.

The shell is merely a gateway to the inside, with the door open you can see the control room BUT if the TARDIS is imitating glass it would show an empty glass box. So open the door you see the control room, make the shell transparent you see an empty glass box (there is nothing inside the outer shell anyway, so it is only linked by the door, the box is empty other than the door link - it would be no different to to making an empty cardboard box out of glass, there is nothing inside to show). My point is the inner TARDIS is NOT inside the outer shell (Plus the chameleon circuit is designed to blend in, so it would NEVER show the inside unless that was the intention). The door is the only way to look inside, that is the connection to the dimension the 'interior' is in, the rest is just an empty box anyway

And to address your final point of what if it did (as in told to show the inside from the outside LIKE glass)? Remember the TARDIS is sentient it would choose the best way to show the interior, changing its size and shape to match that of the control room makes the most sense

This seems to make the most sense on how it works from what we see in the episodes, (Although I will point out there is no reason to do this, and no advantage, so your question will never be answered on screen) 'Fathers Day' comes closest by showing us that the outer shell is just a link with nothing physically in the box, the door is the link so if its not open you can't see in, imitating glass would have to act as glass as there is no link to the pocket dimension anyway (other than the door)

38
How much does the Doctor's TARDIS weigh from the outside?
10
Is There a Limit to Timelord “Bigger on the Inside” Technology?
9
Could the TARDIS stop a Weeping Angel?
2
Silents: Purpose without purpose?
15
How does the TARDIS look from the outside when something large crashes into it?
9
How did the meta-crisis Doctor survive (or remain sane) when Doctor-Donna didn’t?
3
Can you be transported if you're *inside* of a portkey?
5
How much could the Fifth Doctor remember from Time Crash?