Was S.H.I.E.L.D. inspired by any real world organization?

The makers of Marvel Universe has such detailed characterization of the secret organization called SHIELD that I'm naturally curious (especially after watching Avengers and Capt. America movies) whether SHIELD was inspired by any real world organization. If so, then which organization? When it comes to fiction writing, the following three top most best selling author's imagination:

The organization, as it was first imagined by Stan Lee, owed its origins more to the super-agencies of fiction more than the actual secretive three-letter agencies we fear today. Organizations from television shows such as The Man from U.N.C.L.E. lead to a comic-derived variant coordinated by an older, wiser Howling Commando named Nick Fury. 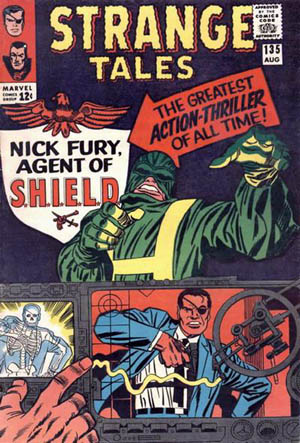 S.H.I.E.L.D.'s introduction in the Strange Tales feature "Nick Fury, Agent of S.H.I.E.L.D." occurred during a trend for action series about secret international intelligence agencies with catchy acronyms, such as television's The Man from U.N.C.L.E., which Stan Lee stated in a 2014 interview, was the basis for him to create the organization.

Colonel Fury (initially the lead character of Marvel Comics' World War II series Sgt. Fury and his Howling Commandos) was reimagined as a slightly older character with an eyepatch (which he lacked in his wartime adventures) and appointed head of the organization. Some characters from the Sgt. Fury series reappeared as agents of S.H.I.E.L.D., most notably Timothy "Dum-Dum" Dugan, Fury's bowler hat–wearing aide-de-camp.

10
Where was the S.H.I.E.L.D. base?
3
Are there any references to 'Excalibur' comics in Thor: The Dark World?
11
When was the S.H.I.E.L.D. twist decided and who made the decision?
1
In the MCU, was the Hulkbuster armor inspired by the Iron Monger armor?
6
What was Aida’s real plan?
6
Was Groot inspired by Tolkien's Ents?
3
Was there any additional meaning to General Hale’s actions?
4
Was this exchange between Captain America and Thor inspired from the comics?
22
Who is the oldest character in the MCU, in real-world terms?