Can Wolverine be decapitated by an Adamantium based weapon?

In Avengers Assemble, Wolverine tries shredding Captain America's shield and nothing happens, he then backs off and remarks that the only substance that can withstand his Adamantium claws is Vibranium. The same thing happens in Avengers vs. X-Men #3 when Wolverine grazes his claws on the shield but nothing happens. So how would that work with two indestructible substances? I'm asking because that seemed to be Stryker's big answer to decapitating Wolverine using Deadpool's Adamantium katanas.

Wolverine has actually been decapitated before: 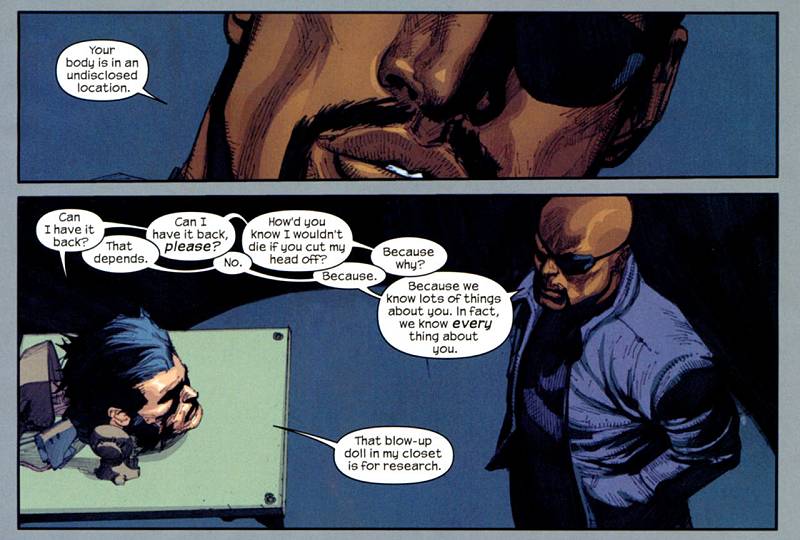 This specific case was a result of a nuclear bomb that went off in the Ultimate Wolverine vs. Hulk #5 comic. Depending on the author Wolverine may or may not die after being decapitated. (Despite the image, being decapitated is generally considered his ultimate weakness that does in fact kill him.)

But could an adamantium weapon decapitate him? I'm assuming the movie you are referring to is X-Men Origins: Wolverine. At the end of this movie Logan is actually shot in the head with adamantium bullets, leaving him unconscious because the bullet penetrates his adamantium skull, destroying his memory in the process (after hitting his brain). To further illustrate his adamantium shell being broken (in the films at least) here is a clip from the movie The Wolverine that shows his claws being cut straight through by a super hot adamantium sword:

Again, this all depends on what universe you are in or what comic you are reading but in general: The answer is yes.

Also see Should the Adamantium bullets have worked on Wolverine?

Yes. Technically while his skeleton is adamantium coated, there's still separate bones, connected by ligaments and tendons, this explains how the Hulk ripped him in half. His bones are unbreakable, but the joints that hold them together are still soft tissue

Not the answer you're looking for? Browse other questions tagged marvel wolverine adamantium or ask your own question.

33
Should the Adamantium bullets have worked on Wolverine?
7
What happens when Wolverine's head is removed?
8
Are the adamantium rules from previous Wolverine movies now not canon after “Logan”?

37
Why Doesn't the Adamantium Bone Covering Kill Wolverine?
7
Shouldn't Wolverine have died in the Savage Land?
55
Why can't adamantium cut through vibranium?
20
How can Wolverine stand with so much Adamantium?
2
What is Logan really remembering from the time he was experimented on?
3
When did Weapon X give Wolverine his adamantium?
7
Why is Captain America's shield called indestructible if Vibranium can be broken down for microscopic applications?
14
Have Captain America and Wolverine ever fought?