Are hand motions required to use the Force?

In almost every canon (that is, visual) source, Force users typically wave a hand to invoke the Force to move or manipulate objects, people and thoughts. I get out-of-universe this is a visual cue that the Force is being used, but in-universe is it strictly necessary?

(The only exception I can think of is when Luke is training on Dagobah and is balancing rocks while standing on one hand with Yoda on his foot. He doesn't appear to be waving his hand to move the rocks.)

Is this addressed anywhere in-universe, even in Legends?

Hand motions are not required to use the force.

The perfect example is in the Empire Strikes Back when Darth Vader faces off with Luke just before he cuts off Luke's Hand. He's force throwing all sorts of stuff at Luke without even taking his hands of his lightsaber. 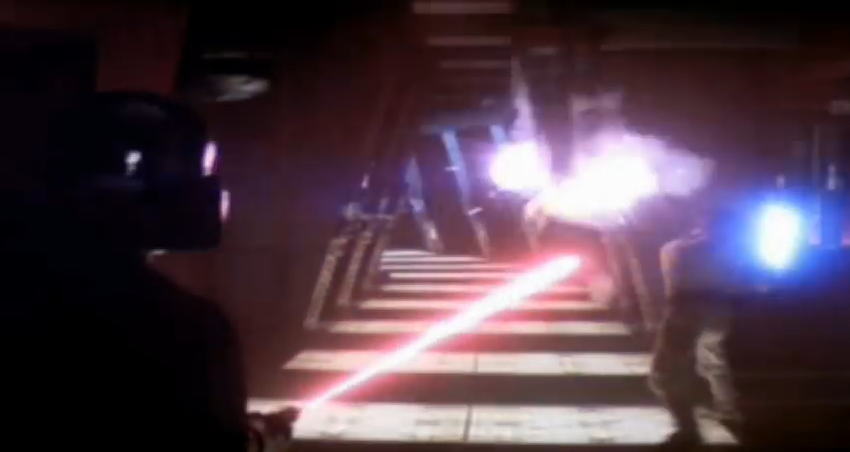 It appears that Jedi or Sith with advanced knowledge of the force can use it without any gestures of any kind.

No, they're not necessary. But they act as a focusing aide and may be necessary for more difficult tasks. Notice that no hand gestures were needed when Luke levitated C3PO:

But when he focuses deeply to attempt to lift his X-Wing, he extends his hand:

Similarly, as ShemSeger noted, Vader doesn't use hand gestures to throw (relatively) lightweight objects at Luke during their duel in the Empire Strikes Back. However, when he attempts to match Obi-Wan's force-push in Revenge of the Sith, he makes this motion:

During the Jedi Academy series of novels, Luke Skywalker talks to an independent tibanna gas miner on Bespin, named Streen. They have a discussion about the Force and it's uses (Streen has been uncontrollably listening to people's thoughts/feelings, leading him to become a hermit). Luke demonstrates his telekinesis by flicking his finger at a distant antenna and making it wave with a telekinetic strike.

He encourages Streen to try as well, and tells him that the gesture isn't truly needed, though it can serve as a focus. Streen, if I recall correctly, accomplishes the same task (with a weaker push) without the hand motion. He claimed the hand motion had been distracting.

It's no longer canon (thanks, Disney!) but it was a good source for the answer to this question.

No it's not. But it is like a form of triggering, take Johnny Wilkinson's trademark pose before taking a kick on the Rugby field or Bruce Lee's scream, a Potterverse Wizard/Witches Patronus animal or Wand choice or a singer's face when they hit big notes.

It's the "harnessing and focusing" your Chi/Force concept and reflects the actual effort involved in a use of the force. Some find things extremely easy while others will find great effort reflected physically.

Someone like Vader can hurl objects and still "fight", this is because he was always "the chosen one" (had the highest Midichlorian count if you want to go that way) thus was stronger with the force... As Anakin his frustration was arguably a mental barrier, meaning he needed to use things like the hand gesture against Obi Wan. As Vader, with his Sith training "complete" he is not only more powerful but has no reservation or frustration holding him back, thus his force use is easier. The Dark Side is also likely inherently easier to use, it's part of the lure.

Likewise Luke can simply steeple his hands and use his Jedi mind trick while Obi Wan and Qui Gon had to use their hands to focus, despite him not believing his training complete. What isn't mentioned is Padme's level of Force "use", it's not a plot point but it's conceivable that as Queen of Naboo she'd have some level of Force affinity to be able to unite her people and is unusually perceptive.

As Anakin and Padme's offspring, Luke would arguably be the most powerful Jedi who ever lived. Mace Windu arguably had that distinction prior as his Force use was the most akin to Luke and Vader's, had he not died, conceivably he would have replaced Yoda as the leader on merit eventually.

Yoda, despite being the leader of the Jedi needed to use his focusing to lift Luke's X-Wing, possibly due to his age but also it may have been relative to his physical size.

Realistically though, no hand motion would be required but it would help the individual.

No Hand movements are not necessary. As seen throughout the films (all 6 of them) and also clone wars and rebels: Hand movements are used MOST of the time (for telekinesis, but also force persuasion as seen in episode 1 with the gungan queen, wato,... and almost every other episode too).

BUT there are also cases where no hand movement was made:

To name a few.

3
Can a force user use their foot to force choke?

27
Are There Machines That Use the Force?
3
Why didn't Dooku use Force lightning on the Invisible Hand?
6
Does one's ability to use the Force depend on distance?
21
Are there animals that can use the Force?
16
Why didn't Obi-Wan use The Force?
7
Does standing or hanging upside down improve one's connection to the Force?
3
How controllable are force visions?