Is the pink goo Princess Bubblegum?

In Simon and Marcy, we see that the pink goo is sentient because it helps Simon out in getting soup. I suspect that it could be Princess Bubblegum because of the 'facial' similarity, the color scheme, and because of her age. 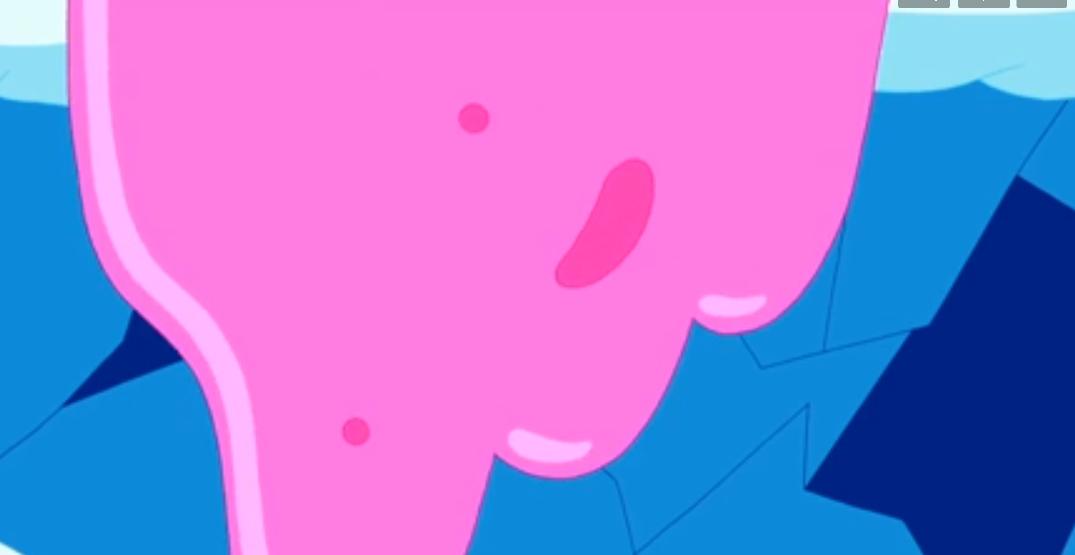 There's some interesting info on this in the Princess Bubblegum entry on the Adventure Time wiki--apparently Princess Bubblegum did originate from the pink goo we see in Simon and Marcy, but the goo continued to exist afterwards, and she referred to it as "my parents". The wiki entry says:

Princess Bonnibel Bubblegum is implied to have formed in the years immediately following the Mushroom War, as a massive, blob-like creature made of pink gum which first appeared in "Simon & Marcy" having taken root in much of the ruined city. Back then the future Princess Bubblegum served as an ally for the two survivors, providing them with cover and escape from the mutants that pursued them, and provided Simon with the soup he wanted for the young Marceline. As shown in the final cutscene of the game Adventure Time: Explore the Dungeon Because I DON’T KNOW!, she was created in the gum, and after she emerged, she learned to think, feel and be independent. Her sentient "parents" remained far beneath the Candy Kingdom, as a massive blob of bubblegum. They were eventually released into Ooo after they were defeated.

Someone posted the final cutscene from the game on youtube:

And the article about the game here says:

The story, written by series creator Pendleton Ward, will please fans of the cartoon with a surprising twist ending that plays into the show's mythos (and is considered canon, according to D3Publisher).

If anyone doesn't want to watch the whole thing, here's the most backstory-licious section of dialogue:

FINN: What just happened, PB? What the Schwiz was that monster?

(shocked reactions from others present, except Ice King who wasn't paying attention)

PRINCESS BUBBLEGUM: About a thousand years ago, I gestated in this sentient pink soup. After it blasted me out on my own, I became self-aware, I became independent. I became...a princess. I've been protecting them down here all these years. In this raw, primal form they're quite sensitive.

(snip some explanation about how they had seeped into the walls and set baddies free from the dungeons, which was apparently part of the game's plot)

ICE KING: Whoa, whoa, whoa. How old are you?

Yeah, the pink goo in "Simon and Marcy" was actually stated by Pendelton Ward to have been Princess Bubblegum. I don't remember the link to the interview, if I find it I'll add it for sure.

Princess Bonnibel Bubblegum is stated in the game to have come from the pink foo in "Simon and Marcy" by herself. She explains how she was gestated in that pink goop, and became sentient, that she became independent, and that she became a princess.

16
What was the official cause of the Great Mushroom War?

2
Who was the Ice King?
5
Why doesn't Finn just use a Flame Shield spell to be more intimate with Flame Princess?
5
Why does Princess Bubblegum remember time differently at different ages?
3
Does Princess Bubblegum remember the Mushroom Wars?
7
Are the penguins actually named Gunther?
3
Why is Cinnamon Bun blue?
16
What was the official cause of the Great Mushroom War?
4
Can candy people create candy people?