Canonically, can Mjölnir be lifted by brute strength?

I was just watching Ultimate Avengers and apparently, Hulk got really angry and just decided to pick up Thor's hammer... Twice. Now we do know that people other than Thor can wield it as long as they deemed worthy, but I highly doubt that was the case here. So is it canon that Mjölnir has been lifted before just by the Hulk's or any other character's brute strength?

No. Canon Earth-616's Mjolnir cannot be moved by brute strength as long as Odin's "worthiness" enchantment functions. It has never been lifted by anyone sentient who was not worthy. It has resisted most versions of the Hulk (exception below), Hyperion, even DC Comics physically strongest hero, Superman (during designated crossovers).

In the Marvel Handbook Entry on Mjolnir:

"Thanks to a special enchantment which was placed upon the hammer by Odin (who happens to be Thor's father and the Omnipotent ruler of the Norse Gods)...No living being can lift Mjolnir unless he (or she) is someone who Odin himself, would deem worthy of possessing the hammer! A lot of pretty powerful people, some of the strongest in the Universe, have tried to raise it...but they all failed!" 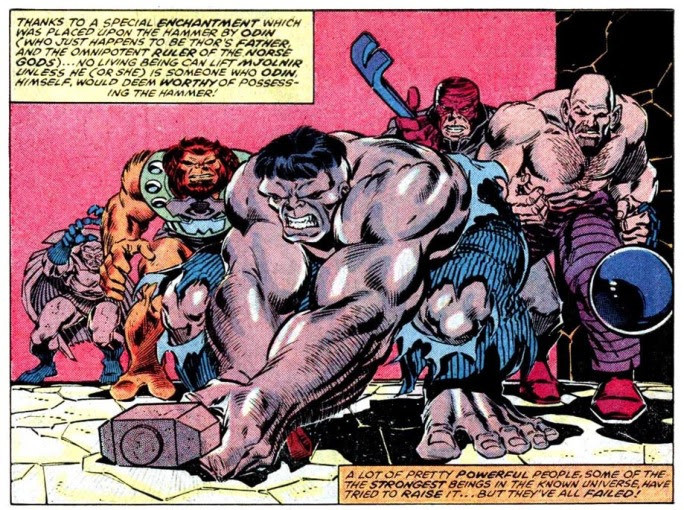 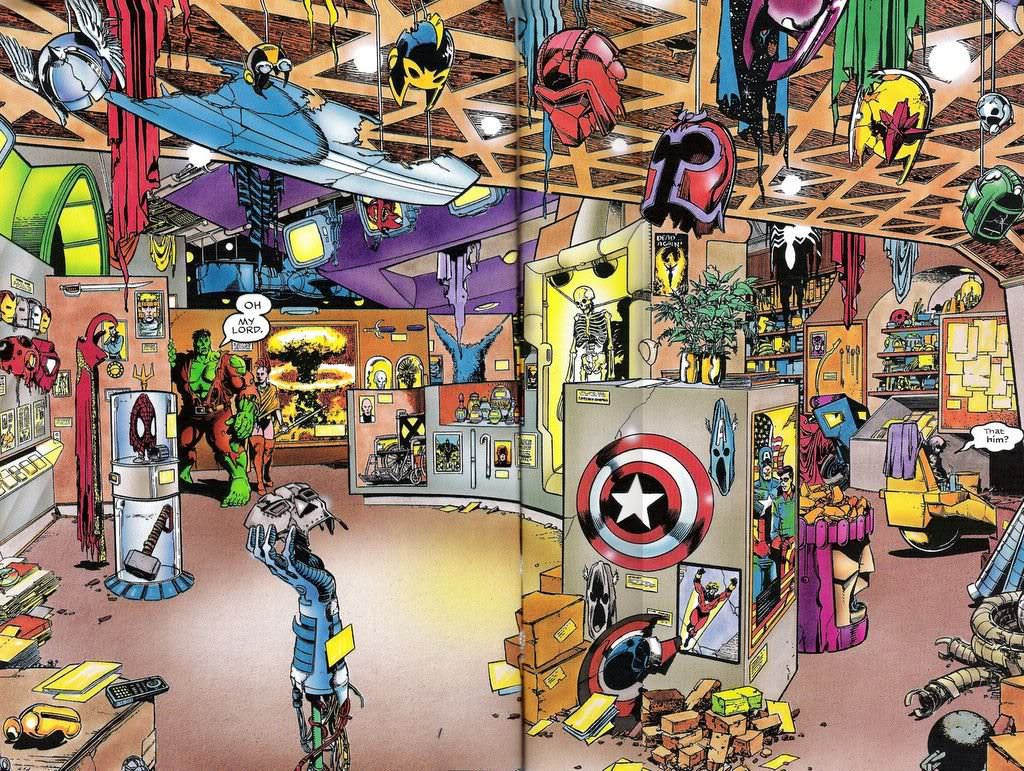 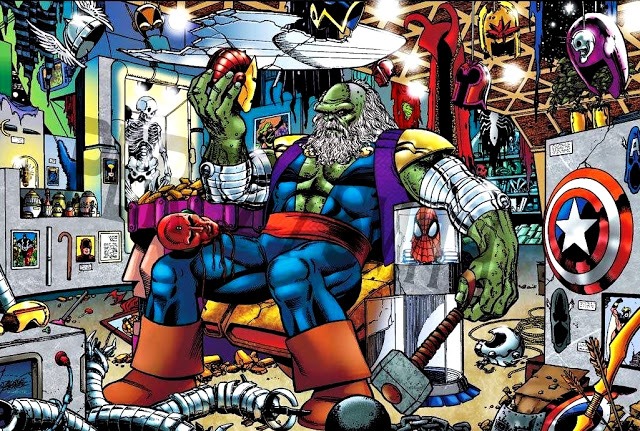 The Maestro by George Perez from The Incredible Hulk: Future Imperfect #1, published by Marvel, December 1992. 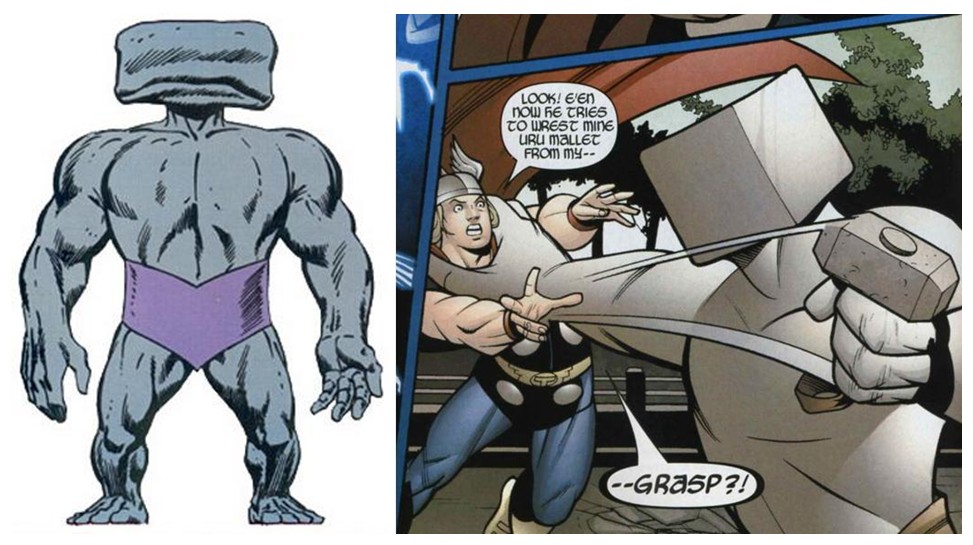 Created by the Mad Thinker utilizing stolen materials from Dr. Reed Richards, Awesome Andy began his life as a weapon to be used against super-humans. Andy was one of the Thinker's first attempts at creating synthetic superhuman servants. Andy is a cross between a robot and more "true" androids as he contains various mechanical parts.

Andy came into existence a shortly after the Thinker infiltrated the Baxter Building for the first time, a hodge podge of data based on Richard's notes on DNA. By splicing the molecular DNA of an ape with Richard's own patented "unstable molecules", the end result being a 15 foot partially organic body into which the Thinker inserted a powerful micro-computer brain coupled with a solar charged power source. The Thinker did not, however, give the android a means of vocalization.

It is Andy's unique design, comprised of unstable molecular tissue and skin, that allows him to imitate certain properties and abilities of the beings he establishes physical or sensory contact with. Andy can imitate anything from the Thing's rocky skin, the wings of a bird, the properties of Thor's hammer or a cello prodigy's musical abilities just by being in close proximity.

In addition to this ability Andy can produce 180 mph winds from his "mouth", form his fists into large granite blocks and by some unknown means expand his size by up to 10%. Andy's weakness is a series of nerve ganglia located under his left armpit, which, when struck, will shut him down.

No, brute strength is insufficient.

In the JLA/Avengers Crossover event, Superman was able to wield Mjolnir in his fight against Krona. Once the fight is completed, he attempts to lift the hammer and finds that he is unable to do so. Since Superman is one of the strongest comic-book characters, it's reasonable to assume that strength alone is not enough.

On those occasions when Hulk has lifted Mjolnir, it's invariably because it's a dream-sequence/trick/not-really-Hulk/not-really-Mjolnir/different-universe/stop-hitting-yourself/Zero-G kind of deal. 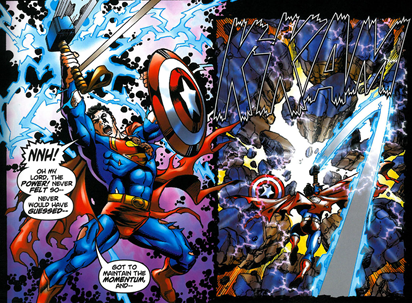 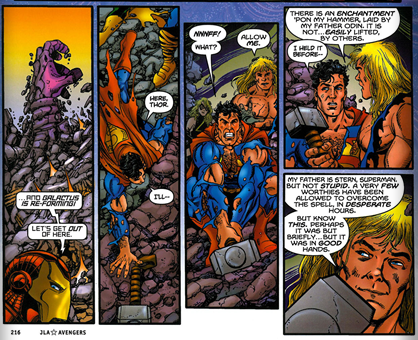 I'm pretty sure that the Vision has lifted Mjolnir, and I have always wondered if this was because he was worthy, or if it was possibly because he used his mechanical strength and overwhelmed the enchantment in some fashion...

He was certainly sentient at the time so it would seem to imply so. It could have simply been that he is not a living being however.

Not the answer you're looking for? Browse other questions tagged thor-marvel mjolnir marvel or ask your own question.

0
In the entire universe, who else can lift Thor's hammer?
39
Can Magneto Lift Thor's Hammer?
12
How does Hulk carry both Mjölnir and Thor?
26
How does Hulk lift Mjolnir in Ultimate Avengers movie?
7
Has Galactus ever been depicted attempting to lift Mjolnir?
5
Is Vision really worthy?

51
Was Thor unworthy during “The Avengers”?
26
How does Hulk lift Mjolnir in Ultimate Avengers movie?
52
Could the Hulk become powerful enough to break adamantium?
12
How does Hulk carry both Mjölnir and Thor?
15
Does being worthy negate the weight of Mjolnir?
7
Has Galactus ever been depicted attempting to lift Mjolnir?
2
How is Thor's hammer imprinted?