What Sith Lords were turned to the Light Side?

Note: all individuals listed here are from Legends.

Sajar, formerly Darth Sajar, was a member of the Dark Council of the Sith Empire during the Great Galactic War. After dueling with the Jedi Master Tol Braga, he renounced the dark side and his title as a Sith Lord to become Braga's Padawan and study the light side.

Gravid was the Dark Lord of the Sith about five centuries before the events of the films. He did not totally renounce the dark side, but drifted to the light side during his reign as Dark Lord. He is notable in that he attempted to destroy Sith knowledge and treasures so that he could attempt to guide the Sith to what he viewed as a better path -- this attempt set back the Sith Grand Plan and forced later Sith like Darth Plagueis and Darth Sidious to attempt to re-discover lost Sith knowledge (such as transfer essence, which would allow a Sith to cheat death). His story is recounted from the Sith point of view in the novel Darth Plagueis:

A human Sith Lord whose short reign had elapsed some five centuries earlier, Gravid had been persuaded to believe that total commitment to the dark side would sentence the Sith Order to eventual defeat, and so had sought to introduce Jedi selflessness and compassion into his teachings and practice, forgetting that there can be no return to the light for an adept who has entered the dark wood; that the dark side will not surrender one to whom, by mutual agreement, it has staked a claim. Driven increasingly mad by his attempts to straddle the two realms, Gravid became convinced that the only way to safeguard the future of the Sith was to hide or destroy the lore that had been amassed through the generations—the texts, holocrons, and treatises—so that the Sith could fashion a new beginning for themselves that would guarantee success.

Lord Praven was Sith (as a species) and a Sith Lord, and not only did he renounce the Dark Side, but he became a Jedi.

In SWTOR, we meet Lord Scourge. He's literally a Sith (as in the species) as well as a Sith Lord. Although he ultimately doesn't become a Jedi, he does turn away from the Dark Side of the Force and pledge his loyalty to the Jedi Order in to prevent the Sith Emperor from destroying the entire Galaxy. 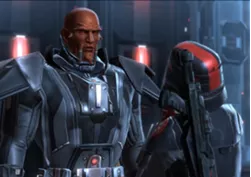 "Though the Emperor seeks to conceal his true plans, I have seen them. That vision has driven me to this… I pledge my loyalty to you. Take me to your Jedi Council on Tython, and I'll reveal why."

Even after stepping away from the Dark Side, he still uses his powers aggressively, including the use of Force Choke and Force Push to slam people into objects

Starkiller was the very first example of this. He was trained by Darth Vader as his secret apprentice but ultimately went on to become a founding member of the Rebel Alliance. This of course is only in Legends and not the (Disney) canon. But, still, he was the first Sith turned Jedi that we saw.

I have read all the answers, and for whatever reason, no one seems to remember Vader. He turned back near the end of his life. That is why he killed the Emperor in Return of the Jedi. He died as Anakin the light side Jedi.

Not the answer you're looking for? Browse other questions tagged star-wars jedi sith star-wars-legends or ask your own question.

1
Did any Sith switch for the first time to the Jedi?
0
Has anybody who started with the Dark Side switched to the Light Side?

19
Sith using the light side of the Force?
6
Are there Light side powers and “Light Jedi”?
27
Can the Sith become Force Ghosts?
7
What is the history of the Sith according to new Disney canon?
7
What are the statistics on conflicts between Sith masters and apprentices?
19
In canon, has a Jedi ever used the light side to kill a Sith?
24
Why did the Jedi turn totally Light side?
8
Is it always necessary for the Sith to commit murder?