How much does the Doctor's TARDIS weigh from the outside?

Lady Romana is quoted as saying a TARDIS weights 5x10^6 kilograms, but I've also read that she was mistaken in this or that she was referring to the inside.

The Doctor's TARDIS has been moved a number of times and has landed on soft ground and not sunk in at all. This indicates the full weight of the interior is not felt from the exterior. But in The Parting of the Ways, Rose, Jackie, and Mickey use a large truck with chains to free up part of the interior of the TARDIS, and when they pull with the truck, the TARDIS doesn't just get pulled along on the ground, so, at least when the door is open, there's some connection between the weight inside and the outside shell.

I've searched for this and Romana's answer is the only one I find, but if that were true and it weight that much on the outside, people could not pick it up and move it.

How much does the Doctor's TARDIS weight from the outside?

I've never seen a in-universe explanation (Possibly because that's something they have avoided defining, lest it cause complications later), but observing it's behavior, I'd guess the following:

The external shell has a weight consistent with what the chameleon circuit has modeled it upon. For example, the Doctor's Tardis is set up as a police box, and, being made primarily of wood, isn't that heavy. Other disguised Tardis examples, however, weren't so light -- The Master's Tardis, disguised as the Melkur, should have weighed about the same as a stone statue of it's size. That being said, I've never seen anything to really confirm this, it's just supposition.

As to when Mickey, Rose and Jackie were pulling on the console, the cable they connected was crossing the threshold into the main Tardis; they were pulling against the actual full weight of the Tardis, not just it's exterior shell. (Goes back to the whole Dimensionally transcendental thing; just as the exterior shape doesn't pass back physical requirements to the interior shape, so does force exerted on the inside not translate to force on the outside) Had they simply hooked the cable around the Tardis, it most likely would have moved quite easily. One way to think of it is that the door of the Tardis is an opening to a Pocket Universe; it doesn't CONTAIN it, so much as provide a portal to it.

In the Episode "Flatline," the twelfth doctor says that he has altered the relative gravity of the Tardis. He says this is always happening - and that the earth wouldn't be able to support its real weight if he didn't. By altering the "gravity" of the Tardis, Clara is thence able to place the now miniature Tardis (looking suspiciously like a plastic cookie jar) in her purse.

As such, the correct answer is "Whatever the Doctor wants it to weigh."

In the Hartnell era a group of egyptian slaves are easily able to drag the TARDIS into a tomb.

And then again in the Troughton era during the serial The Faceless Ones the airport security are able to load the TARDIS onto the back of a truck and carry it off. I like the explanation that the exterior weighs as much as the object the chameleon circuit has chosen to replicate.

Coming a bit late to the discussion, I just want to point out that in the episodes Planet of Fire (season 21), The Master's TARDIS turned into a "pillar of stone" which fell over during one of the earthquakes. He later enlisted the help of the locals to put it back upright which took four people and another with a rope (and I assume a pulley).

I therefore think that a TARDIS weighs as much as the object the chameleon-circuit makes it turn into would weigh.

More evidence that its outside weight is the weight of whatever it's in the form of (i.e. a blue police box): 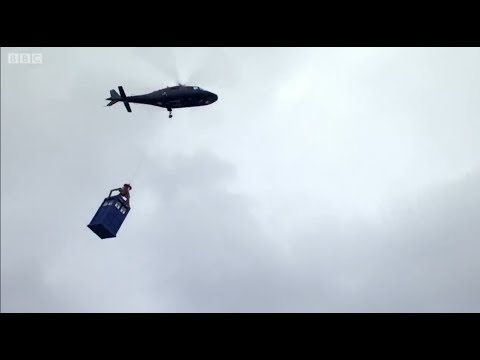 The TARDIS can easily be picked up by a medium-sized helicopter.

This also makes sense as an assumption, since as K-H-W says, the outside of the TARDIS is nothing more than a police box in size and shape, and the inside is not really the inside but a whole pocket universe to which the outside grants access.

The interior of the TARDIS is another dimension, whose entrance is the police telephone box, but the relation stop there. It is not contained there, and also, the TARDIS is equiped with gravity manipulators (that is how she fly trough normal space), so it could weight what the Doctor/she likes. I have to point, that the Exterior Shell isn't really wood, its a plasmic shell that LOOKS like wood, making impossible to guess the weight by the materials. Also, the Doctor could lock the TARDIS position so it wouldn't move; not allowing Rose, Jackie and Mickey to move her when they tried to open the console. Note that the part of the TARDIS dimension that is the console room is fully integrated with the External Shell, like we seen in the Voyage of the Dammed, when the Titanic broke into the console. Whith these I mean that the gravity manipulator have to be online all the time, allowing the TARDIS to weight what she liked or to the locked, because otherwise it would weight more or less as the Control Room.

The TARDIS is about 2000 KM in diameter, this is a picture of the true size of the time vessel.

This would sink through the planets crust if its full weight was concentrated into a footprint a meter square.

There's a facet to this scenario that is frequently forgotten.

The interior of the TARDIS (the "real" TARDIS) is not technically "in" the police box shell that we see. It's in a dimensional "elsewhere", connected only by the doorway.

In Father's Day, that connection is broken, and the Police Box becomes an empty shell. It's still the exterior of the TARDIS, which is presumably where the Chameleon Circuit is housed, but its portal to the true ship is severed.

So the real weight of the TARDIS, which is impossibly great, is never actually weighing down on the exterior.

In Flatline, the size of the ship is changed, but its weight is not - even at a foot tall, it would have still weighed the same as the full-size Police Box shell - too heavy for Clara to lift. That's the weight that he adjusted so she could lift and carry it.

In Name of the Doctor, the TARDIS exterior is growing, because the "real" TARDIS is beginning to extend into out universe, and the Police Box structure is expanding to fill it. So it's probably much heavier, about the weight of a small mountain, one about the size that the ship appears to be, but not yet enough to "crack the planet in half".

Well, in "The Impossible Planet", the TARDIS does end up dragging the rocket away from the black hole. Maybe in space things work differently. There's been evidence that it's not that heavy, though, like mentioned in previous comments. Also, at some point in maybe Season 4 or 5 (it was one of the ones with five or six main actors), the TARDIS had been carried by a forklift or something.

The TARDIS is not unusually heavy, although no precise figure for its weight has ever been given on screen. But it may weight no more than a few ounces.

During the Jon Pertwee era, because it was 'grounded' for many years owing to the Doctor's exile on Earth, UNIT were occasionally compelled to move the TARDIS from place to place by the simple expedient of brute force, and always managed to do so without any obvious difficulty. All that appeared to be needed was a squad of soldiers - and possibly a rope.

In Spearhead From Space (1970), the Brigadier had the recently landed TARDIS moved by UNIT from its landing site in Oxley Woods near Ashbridge to UNIT headquarters in London.

In The Claws of Axos (1971), the Brigadier had the TARDIS moved, by lorry, from UNIT HQ to the Nunton nuclear power complex in Southern England.

In The Time Monster (1972), Captain Yates and a squad of soldiers moved the TARDIS by lorry from UNIT HQ in London to the TOMTIT facility at Wooton outside Cambridge.

More unusually, in Carnival of Monsters (1973) the Lurman carnival proprietor, Vorg, was able to hold the miniaturised TARDIS in one hand when showing it to his assistant, Shirna, on discovering it inside the miniscope (establishing that, on this occasion at least, its weight was not more than a few ounces).

As has already been mentioned, in earlier serials the TARDIS had been moved around on a number of occasions. An early such incident took place in the Hartnell serial The Web Planet (1964), when the Zarbi dragged it away across the plain of Vortis. However, the very earliest was in Marco Polo (also 1964), when Polo's chinese servants carried the TARDIS from the Roof of the World to Peking on a handcart.

Also not mentioned previously is that the TARDIS is so light that when it landed on the sea during the Troughton serial Fury from the Deep (1968) it floated, and the Doctor and his companions were obliged to paddle ashore in a rubber dingy.

Other occasions include the time in Egypt when the slaves of Pharaoh manhandled it a few dozen yards from the open desert into the interior of a nearby Pyramid, during the Hartnell serial The Daleks Master Plan (1965); and when it was stolen from Gatwick Airport in London in the first episode of the Troughton story Evil of the Daleks (1967) and driven away on the back of a truck - on which occasion the theft appeared to be managed by just two men.

Subsequently, in the Tom Baker serial Logopolis (1981) we witnessed the partially miniaturised TARDIS being carried through the streets of Logopolis - again by just two men.

There were, now I come to think of it, many similar incidents. For instance, in The Faceless Ones (1967) the TARDIS landed in the middle of the main runway at Gatwick Airport, and had to be moved by the airport police. And while visiting London's Heathrow Airport, in Time Flight (1982), the TARDIS was loaded onto a Concorde for the flight into the past using only a small fork-lift truck.

Accordingly, the suggestion that the TARDIS weighs millions of pounds is simply not born out by the evidence.

The original weight of the TARDIS would crack the surface of the earth so no one noes the actual weight because the doctor changed it.

The Tardis runs on a star as seen in "Journey to the Centre of the Tardis".

The Tardis has "another dimension" built or grown within its doors which morphs all the time creating new corridors like a giant (though finite to a point) a cosmic data bank which can save past "control rooms" which once were "the" Tardis consoles.

So as to how much the Tardis weighs on the outside is impossible to say unquantifiable because it is an everchanging force.

0
What happens when a TARDIS falls over onto its door side?
14
What is the TARDIS' true weight?