Who was this (possibly DC Comics) female character that was a daughter of Satan, or some demon

This female character was in - if I remember correctly, DC Comics - comic book I read in the 80's. She was described as the daughter of "Satan" (or some similar evil being) and had an ability to absorb other people's suffering.

She did not have horns or any other "classic Devil" physical attributes and was more of a good person (not a villainess). Generally speaking she looked like a typical comic book chick although I think she had no irises (her eyeballs were all white).

Before coming to earth, she had been on a planet that was ruled over (or should I say, victimized) by her father.

You might be talking about Raven, daughter of Trigon and famous as a member of the Teen Titans. 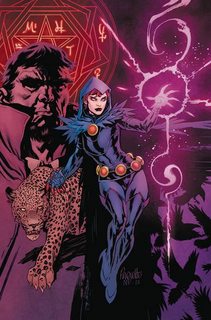 I know who you're talking about but its not Raven. She looks like Silver Banshee mostly, but I remember she has a sword as well and two hound pets.

Lady Death is the answer