In which episode does the tenth Doctor fly through the Time Vortex using only his sonic screwdriver?

I’m looking for a Doctor Who story.

If I recall correctly, the tenth Doctor once travelled through the Time Vortex without the Tardis, using only his sonic screwdriver. I have a clear video in my mind with the Doctor flying through the vortex, his arms pulled close, screwdriver pointing forwards as if aiming with it.

I believe you are thinking of the episode "Forest of the Dead" the second part of a two part story- the first part was "Silence in the Library".

The Tenth Doctor takes Donna Noble to a planet-sized library in the 51st century. They find it empty of human life, with a final recorded message: "4,022 saved, no survivors." As an archaeological expedition arrives, lead by the mysterious Professor River Song, they can only give one piece of advice: count the shadows.

Donna is gone, the Vashta Nerada are out for fresh meat and the Tenth Doctor is running out of options. Can he trust the mysterious Professor River Song, a woman who claims to be from his future? Why would his future self have given her his sonic screwdriver, or tell her his real name? Even if they do work together, can anyone stop the shadows from claiming them all as their next meal?

In the scene you're thinking of, the (10th) Doctor realizes River Song's screwdriver has a neural relay in it and he races to connect it to the library core to upload her data ghost.

Donna and the other saved people return in the library, and begin to be evacuated. Donna cannot find Lee, and she and the Doctor conclude that perhaps he never really existed at all. The real Lee sees as he steps onto a teleport, but his stammer prevents him from calling out to her before he is teleported away. The Doctor and Donna briefly muse over River Song's diary, as it contains details of her life and their future. Ultimately, they decide not to look in it, and leave it behind on a shelf along with the sonic screwdriver his future self gave her.

Suddenly, the Doctor comes running back. He realises that since he knew River's fate all along, his future self would have had years to think of a way to save her. He knows that he wouldn't just give her a sonic screwdriver without a good reason. Opening it, he finds that it contains a hidden neural relay. As with the data ghosts, her consciousness has been saved there. However, it is fading. The Doctor takes River for "one last run", as he sprints back to the core. He uploads River's data ghost into the Library's computer, as the face of Charlotte looks on and smiles. River appears in a virtual reality created by Charlotte and is reunited with all of her team members for all eternity.

Clip (the vortexy part you're remembering is about a minute in):

From the video description, it seems that you are talking about S04E09 Forest of the Dead episode.

He did that to save River Song to the library.

I don't remember this ever happening with the Tenth Doctor (at least not on television), but something vaguely similar happened to the Eleventh Doctor in series 6, episode 4 "The Doctor's Wife". Trapped on a TARDIS graveyard planet, the Doctor build a makeshift console to pursue his own (stolen) TARDIS: 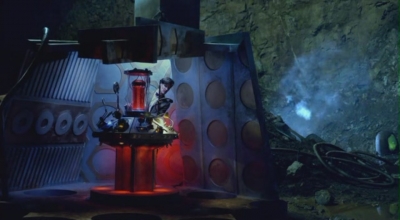 The reason I bring this one up is because the makeshift TARDIS is shown flying through the Time Vortex.

Otherwise, there are a handful of times through the show where the Doctor uses a Vortex Manipulator instead of the TARDIS. The Doctor is never shown in the Time Vortex with only the Vortex Manipulator, but it may appear as though he's using the Sonic Screwdriver to time-travel.