I read this one a few years ago and it's just annoying me that I can't find any trace of it anywhere. I don't believe I've misremembered the details, but if someone can enlighten me:

The main character was a teenager about 18-20 years old and I'm convinced his name was Asfeo. He lived with his father who was very authoritarian and sent him away to spend time with a hermit/guru of some sort. The story took Asfeo into various situations where he had to surrender his will completely to the events that happened around him, this being the real crux of the story. So an early predicament was when we ended up in a lake and lost all of his possessions and needed to rely on what others, and the world, gave to him rather than relying on what he had brought with him. The climax of the story was of him arriving at a small house where the hermit lived, and needing to use the knowledge of what he had learned on his journey in order to gain access to it. After struggling to do this, he finally had his aha! moment and everything made sense to him. This is when the hermit appeared to him, and it turned out to be his father who was actually a wise old man who had sent his (possibly spoilt brat) son into the world to learn what life was really about, as he was preparing him for his legacy which was to be king or emperor or similar. In short, Asfeo needed a short, sharp lesson to gain some wisdom so he could live and rule appropriately - so it was a rite-of-passage book.

The description in the original posting sounds like a parallel-universe description of my first Archonate novel, Fools Errant. The young fop sent out into the world of Old Earth is an apprentice Archon named Filidor, and the sage/guru Osfeo is a character in a book of homilies he reads from as he progresses. There is an episode involving the collapse of a giant beaver dam and the lake that breaks through. Filidor was guided across the world by an irascible hairless dwarf who was more than he seemed.

The novel was originally published in Canada in 1994, just in time for its publisher to be absorbed by a conglomerate and dissolved. It was republished by Warner Aspect in 2001, just in time for the popular mood to turn against lighthearted satire.

Here's a link to the first chapter: https://www.matthewhughes.org/excerpt-from-fools-errant/

I'd say this was most probably not Vance. I believe I have read all of his work, except perhaps for one or two stories that appeared only in pulp magazines when he was young, so it would be unlikely for you to stumble upon this exceedingly rare story in an ancient magazine—indeed, this valuable treasure that you'd have had to hunt down in order to find it. In addition, this kind of plot doesn't sound Vancean at all: he usually isn't very interested in Biblesque moral lessons like this one.

There is an Osfeo in Matt Hughes's Fools Errant, but it's not the main character (I think). It is said that Hughes was heavily influenced by Vance; the book is even dedicated to Vance. A fragment: 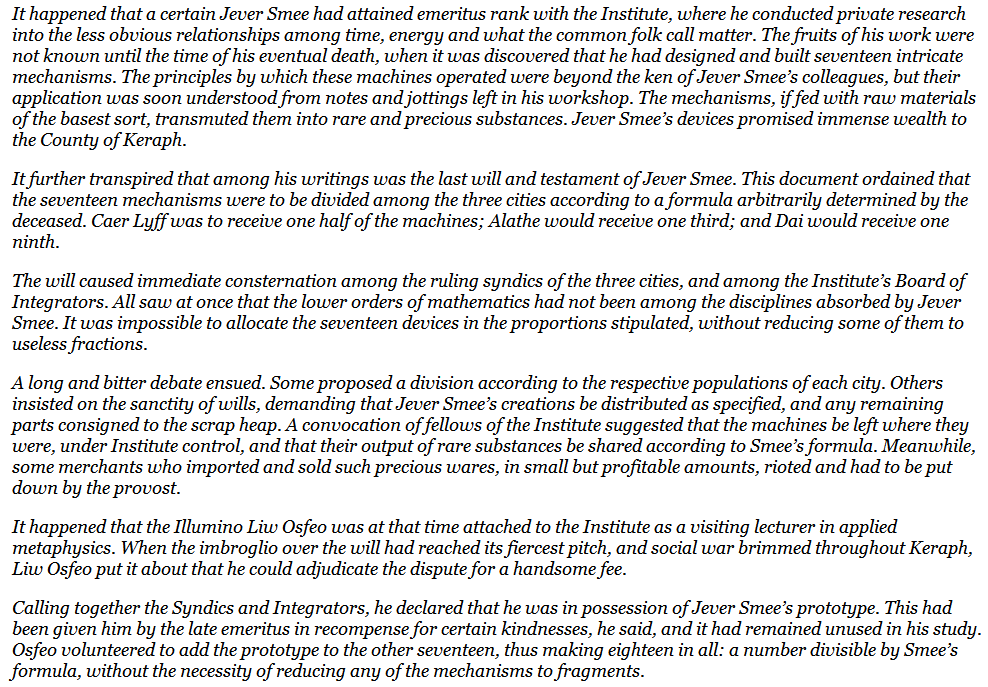 Not the answer you're looking for? Browse other questions tagged story-identification novel jack-vance or ask your own question.

10
Fantasy Book possibly titled 'Iceworld'
6
Find Urban Fantasy Book with a mysterious guy who lives in the woods
10
Fantasy book - Druid novel
4
SciFi book search, possibly baen?
5
Looking for a fantasy book about a girl who could talk to cats