Was there specific evidence that Dune's house of Atreides was related to Ancient Greeks?

Goran Jovic in Are Jews in Chapterhouse: Dune the same cultural group as in our universe/timeline? states:

... a book which features direct descendants of Ancient Greeks in far future as main characters.

Is that really the case?

I thought that the Agamemnon was merely the alias that the Titan Formerly Known as Andrew Skouros took because he admired the historical figure.

Wikia seems to disagree, but provides no actual evidence:

Skouros in some way could trace his lineage back past the Time of the Old Empire, thousands of years to the House of Atreus and a famous ancient King Agamemmon.

Is there some specific in-universe evidence to back up this biological link?

From God Emperor of Dune: (Leto II speaking, in one of his journals)

My paternal grandfather was The Atreides, descendant of the House of Atreus and tracing his ancestry directly back to the Greek original.

And from Children of Dune: (of Alia)

Other voices wove around her mind: "I, Agamemnon, your ancestor, demand audience!"

And from Heretics of Dune:

Even on Gammu, few admitted to either Harkonnen or Atreides ancestry, although the genotypes were visible here—especially the dominant Atreides: those long, sharp noses, the high foreheads and sensual mouths. Often, the pieces were scattered—the mouth on one face, those piercing eyes on another and countless mixtures. Sometimes, though, one person carried it all and then you saw the pride, that inner knowledge:

Gammu’s natives recognized it and gave it walkway room but few labeled it.

Underlying all of this was what the Harkonnens had left behind—genetic lines tracing far away into the dawn times of Greek and Pathan and Mameluke, shadows of ancient history that few outside of professional historians or those trained by the Bene Gesserit could even name.

So, just within the Frank Herbert books, it is clear that the ancestry is supposed to be directly linked to the Greek house of Atreus, whose two sons Agamemnon and Menelaus were the Atreides.

I don't know anything about any "Titans" or "Andrew Skouros" - I suspect those are things from the prequels, which have nothing to do with the actual Dune books.

However, in Children of Dune, we clearly hear a snippet of Alia's "Other Memory":

"I, Agamemnon, your ancestor, demand audience!"

Absent any canonical evidence to the contrary, it's clear that Alia really is descended from the Ancient Greek Agamemnon.

Children of Dune - Other voices wove around her mind: "I, Agamemnon, your ancestor, demand audience!"

Children of Dune - Ghanima said. "We Atreides go back to Agamemnon and we know what's in our blood."

God Emperor - My paternal grandfather was The Atreides, descendant of the House of Atreus and tracing his ancestry directly back to the Greek original.

God Emperor - And I have traversed the far wanderings of the Fremen. Through my father’s line and the others, I have gone right back to the House of Atreus.

From Homer's The Iliad

the Greek word for 'Son of Atreus' is *Ἀτρεΐδης *

A direct pull from the Homeric tale in his work, a straight forward connection considering all the included quotes. 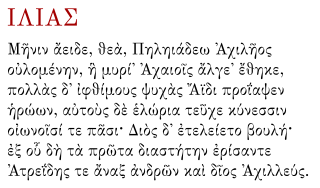 10
Are Jews in Chapterhouse: Dune the same cultural group as in our universe/timeline?
12
Which books are considered canon when talking about Dune?

10
Are Jews in Chapterhouse: Dune the same cultural group as in our universe/timeline?
17
Is there canonical evidence in the first 6 books that Dune takes place in 10191?