Who is the first author who mentions that Vampires can reproduce?

With the latest movie of the Twilight saga I came to the understanding that Vampires can have children. According to this Wikipedia entry it is only possible between a male vampire and a human female.

If it is part of Vampire canon, that is a different question. Surely Stephenie Meyer wasn't the first author to put that in their work, hence my question:

Who was the first author to include the idea that male Vampires can have children?

The Holmes-Dracula File, the second book in Fred Saberhagen's Dracula series was published in 1978 (predates the Zelazny book) and mentions a way a vampire and a normal human can have children.

A woman who becomes pregnant in the normal human way when she is also having an affair with a vampire will sometimes give birth to twins: one baby will be normal, one will be a vampire from birth.

Dhampir are offspring of one human and one vampire parent, and originate from Balkan folklore.

In an essay entitled "The Vampire" by T. P. Vukanović, contained in the larger work Vampires of the Slavs by Jan L. Perkowski in 1976 and originally in the Journal of the Gypsy Lore Society in 1959. There are a few sections that speak about these children of vampires (see below).

While exact dates aren't given, the author (TPV) discusses the origin of the vampire folklore and gives dates starting in the early 1700s.

Dhampires have long been part of this folklore, but they have largely been shared through oral traditions, rather than by texts.

While other research and evidence on this matter surely exists, this should be sufficient to understand that most cases of vampire offspring in science fiction and fantasy works are derived in some way from these historical beliefs.

Whomever the first author was may be hard to discover, as those oral myths were surely written down long before they were published in a work of fiction. Especially considered that this research paper was published in 1959, predating Changeling by 21 years. 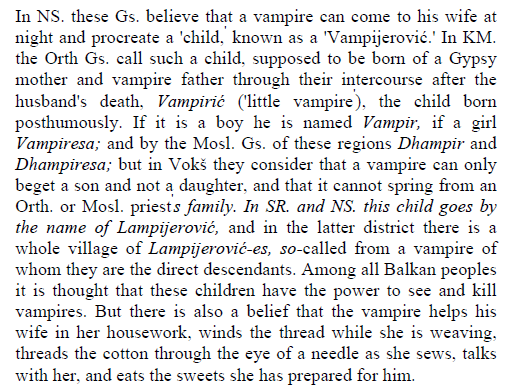 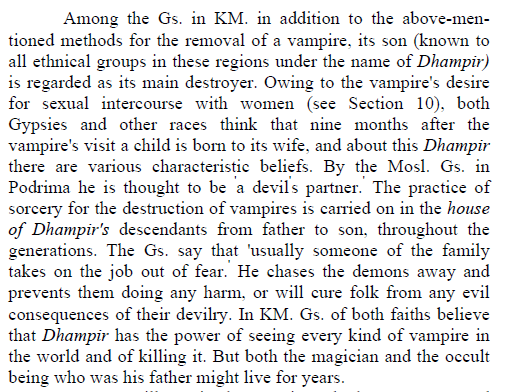 You didn't specify novels in your question, so I think the Blade film series and TV series, based on the Marvel comics of the 1970s, should count. These comics predate the works mentioned in all three existing answers here, as there is explicit mention of a half-vampire in The Tomb of Dracula #58 published in July 1977: 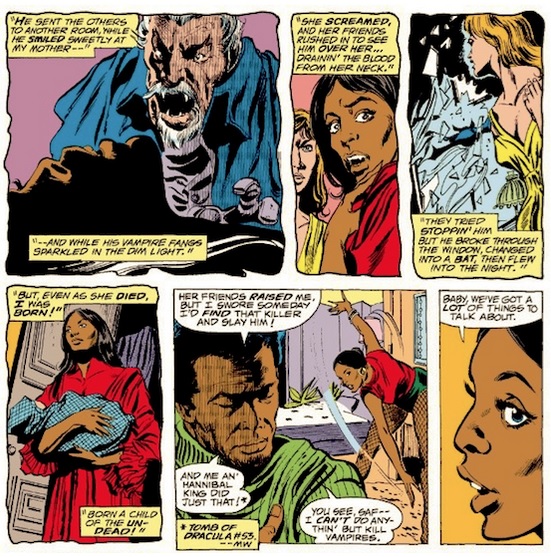 (big thank you to @DetectiveChimp for finding this image!)

While all vampires are capable of having offspring both through reproduction and 'turning', the birth-rate between mating vampires is so low that it is practically non-existent (even after many centuries, they may only have one or two children).

Pure bloods are very capable of siring offspring through reproduction and through turning, as with non-pure bloods, although the birth-rate between mating purebloods is so low that it's practically non-existent.

Going through this list, it seems that the first appearance of a dhampir in a book would be in 1980, in a book called Changeling by Roger Zelazny.

This assumes we're only talking about what could be considered "modern" literature, and not reproductions of Balkan or other legends in book form.

While this is not an direct proof that vampires can reproduce, Dr Lewis Weyland from "The Unicorn Tapestry" by Suzy McKee Charnas is simply member of completely different specie (feeding on blood and able to live through extremely long time), hence its natural he can reproduce. Although its not clear does it has to be with another vampire or human, he does ask his partner about contraception before they have sex.

This story has been published in 1980 so it would be similar in age to Zelazny's one.

I don't know for sure if this is the first, but Laurell K. Hamilton has a male vampire impregnating a female human in The Killing Dance from 1997. The woman mentions that they spent a lot of time in a hot tub (presumably to raise the body temperature of the vampire).

Not the answer you're looking for? Browse other questions tagged history-of vampire or ask your own question.

4
What would happen if a female vampire hybrid was bitten?
1
Does a general vampire canon actually exist?
4
What is the Mother of All Darkness?
7
Was the idea of Batman inspired by vampires?
3
In the Underworld franchise, what are the canonical physical advantages to being a Vampire over a Lycan?
11
Looking for LGBT book about French mages and vampires