Where do TIE Fighters generate thrust?

TIE Fighters are an extremely recognizable part of the Star Wars universe, but there's something about them that bothers me.

Where do TIE Fighters generate their thrust?

Based on the way TIE Fighters move in the battlefield, you would think they operate similarly to most other Star Wars universe propulsion ships.
They have thrusters in the back to push the craft forward, yet they can move along an X and Y axis.
An example being whenever the Millennium Falcon or an X-Wing takes off after being docked or “parked”. They rise up vertically into the air, rotate around, and then blast off using the thrusters on the back of their ship.
These ships have obvious ion engines that display a bright glow where the thrust is coming from.
Imperial Cruisers use these glowing propultion systems, as seen here: 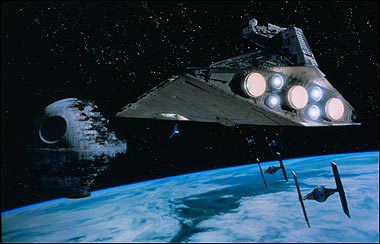 However, in the same picture, you see some TIE Fighters heading towards the Cruiser.
They don't have any glowing propulsion spots.
Here is a better look at the back end of a TIE Fighter: 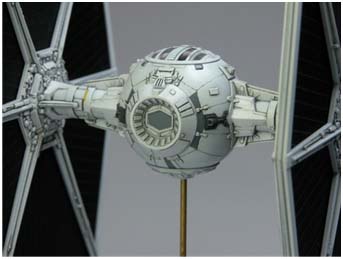 This part of the ship does not glow when it is flying around in space.
So, back to the original question: Where do TIE Fighters generate their thrust?

The little red spots on the TIEs in the first picture are the main engine outlets. They are clearer here: 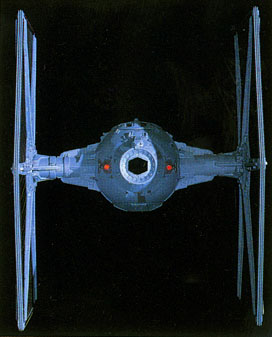 Although there were only two engine outlets, Wookieepedia's article on the SIE-TIE engine cites The Essential Guide to Warfare to say that the engine

So that's how they maneuvered.

As for why the TIE engines look different than the engines on other starfighters like the X-Wing, the most likely reason is that the TIE fighter is considerably less massive than the X-Wing (the TIE design famously omitted shields and life support systems to reduce mass) and can therefore use smaller and fewer engines to achieve the same thrust and maneuverability.

It could also be that the X-Wing uses a "fusial thrust engine" rather than an ion engine like the TIE (on the other hand, the Y-Wing uses an "ion jet engine", but its engines look more like the X-Wing than the TIE fighter).

35
What allows Star Wars ships to slow down?

75
How did the Death Star move?
10
How can S-foils (X-foils) help with heating in space?
27
Have we ever seen TIE fighters/bombers operating in atmosphere before?
8
Were TIE fighters inspired by Japanese Zero fighters?
12
How do the star fighters in Star Wars fly with no side thrusters?
8
Where do X-Wing fighters—and similar small scale Rebel craft—dock to refuel and tune up when in space?
35
What allows Star Wars ships to slow down?