Novel about a spacefaring mission trying to reestablish contact with Earth

Looking for a novel I read in the early 90s; it came from a local library so it may be quite a bit older. Might've been a YA novel, as it was in the same shelf as a bunch of William Sleator novels. All my memory detailed below.

I have repeatedly tried to investigate the works of Melissa Scott (as suggested by @mkennedy) and found no matches in the plot summaries I can find online. It is possible I'm missing one or more of her works, but there doesn't seem to be a large amount of her books that fit the timeframe.

This is a very long shot, but I wonder if this might be Alien Main by T. L. Sherred.

This seems a very obscure book and I can find only the very briefest descriptions of it. I mention it only because it is the sequel to Alien Island, which I have, and that book does contain a main character called Lee Lukkari. It's possible that this character got reused for the sequel.

The only descriptions of the book I can find are tantalisingly vague but consistent with your description. For example Google Books says:

Fifty years after the nearly total annihilation of Earth by war and disease, three agents of the galactic federation set out to reopen contact with the closed world and reestablish trade with the planet's shattered civilization

Set on Earth some two hundred years after aliens had nearly destroyed life on the planet, the novel finds descendants of the aliens returning to atone for the atrocities committed by their ancestors. They find that the inhabitants of Earth are now living in tribes, with no connections except for a common belief in a goddess, whose return they await.

The time frame fits since the book was published in 1985, and the cover is yellow and green (ish): 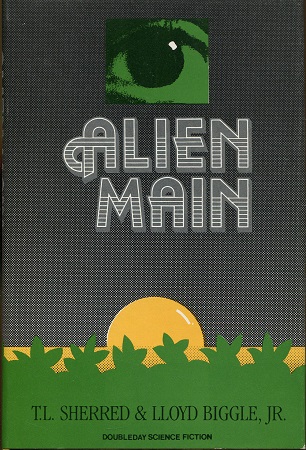 I wouldn't normally post an answer based on such slender evidence, but I post it in the hope that one of the site members has or can find a copy of the book and maybe confirm the identification.

8
Novel about first contact and traveling the universe at light-speed
21
Anthology book with story about robotic bombers
8
Movie: astronauts visit a Mars-like planet with aliens passing as humans, alien embarks the ship, which destructs before landing on Earth
9
Science Fiction Short Story Regarding First Contact with Alien Race that Values Emotions
10
Sci fi novel, alien planet 'Klansmen' with pierced wrists
4
Short story about aliens, in contact with a middle schooler who feels doom approaching. At the end the aliens "wind down" Earth