How did demolishing the bridge to the lake town Esgaroth help against Smaug’s attack?

From Chapter XIV of The Hobbit, describing the preparations the men of the lake-town Esgaroth made against Smaug’s attack:

Every vessel in the town was filled with water, every warrior was armed, every arrow and dart was ready, and the bridge to the land was thrown down and destroyed, before the roar of Smaug’s terrible approach grew loud, and the lake rippled red as fire beneath the awful beating of his wings. Amid shrieks and wailing and the shouts of men he came over them, swept towards the bridges and was foiled! The bridge was gone, and his enemies were on an island in deep water—too deep and dark and cool for his liking. If he plunged into it, a vapour and a steam would arise enough to cover all the land with a mist for days; but the lake was mightier than he, it would quench him before he could pass through.

But Smaug was a winged dragon, and the description of his assault on Esgaroth indicates that he could fly—so how could demolishing the bridges foil his attack at all, as it seems to have done?

You have to read the whole passage. Specifically:

... his enemies were on an island in deep water too deep and dark and cool for his liking.

Smaug could fly and would likely initially attack from the air in an assault on a target like Lake Town. However, he wasn't a machine. He would eventually tire from flying around or need to land for more precise attacks against smaller targets hiding in the town.

That said, the bridge was a large, open, relatively stable structure on which to land while the town itself was cluttered with burning, smoldering rubble and people some of whom were actively attacking.

By scuttling the bridge, the people of Lake Town forced Smaug to stay in the air which, oddly, gave them certain advantages:

Tolkien scholar Michael Martinez answers this question on his website:

So, let me preface my answer by saying that I believe J.R.R. Tolkien had a very specific image in mind about his dragons, in terms of how they would fly and how they would move across the land. And I think he must have felt that the act of flying would impair some of a dragon’s physical actions, such as breaking into buildings and grabbing people (either to eat or to kill with his powerful jaws). But we can also look at the behavior of dragons in Tolkien’s stories. For example, Glaurung (a non-flying dragon) loved to taunt his victims, and to cast spells upon them. Thus he wove his evil magic around Turin and his sister Niënor. Smaug, too, sat upon his mound of gold and searched for Bilbo even while engaging in a contest of wits with the (invisible) Hobbit. Finally, Dáin I and his son Frór were both slain at the door to the dwarf-king’s hall by a cold-drake.

So I think that Tolkien felt there was a very strong, perhaps necessary ground-based behavior for dragons. We don’t know if the cold-drake could fly or not. We’re not even sure what Tolkien meant by “cold-drake”, since his other dragons apparently all breathed fire. Whether Smaug could have crawled over the buildings of the town without sinking into the water is not clear to me. Tolkien’s full-color illustration of Lake-town seems to suggest that the piles supporting the buildings were of a similar strength to the piles supporting the main bridge. 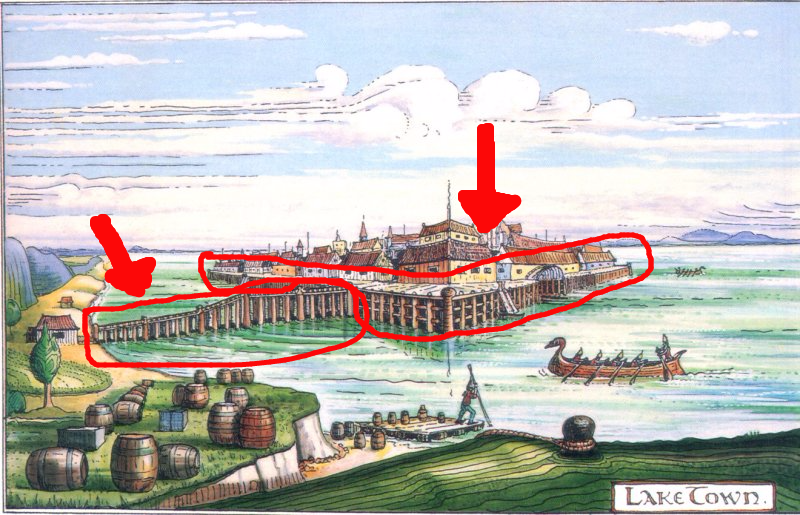 Should the men of Lake-town have known how much weight the bridge could bear? In other words, in order to create a dragon-trap, how would they know what a dragon’s weight should be? It’s not like they could weigh and measure Smaug before he attacked. Furthermore, their carts and horses might — collectively — equal a dragon’s weight depending on the loads they were bearing, so they would run a risk of drowning themselves if the bridge collapsed under “a dragon’s weight”. I think, therefore, that Tolkien had the right idea in that throwing down the bridge would discourage the dragon from creeping up to the houses and clawing around inside for people; also, he would be unable to easily climb over the houses and scoop people from their boats.

Landing on the buildings might, in Tolkien’s view, have exposed the dragon to all sorts of attacks by the men from many directions. Hence, in order to keep his enemies/prey in front of him he would need to approach the town by the bridge. Also, if Smaug could stand on the bridge with ease he would be able to attack any boats that tried to come near by, flaming them.

Furthermore, I think Tolkien had an idea of what powered the dragon’s fire. So far as I know he never attempted to explain this in any of his published writings. But whatever it was, water would have quenched that internal furnace — perhaps even by mere contact with Smaug’s skin. It’s as if the dragon’s body was its own furnace, and he had to maintain his distance from water in order to generate the heat to breathe fire. This is pure speculation on my part.

J.R.R. Tolkien’s ideas about weaponry and tactics have sometimes been challenged by readers with knowledge and experience in such matters, but when it comes to dragons no one is really expert enough to know if Tolkien’s dragons were realistic in any way. Tolkien’s imagination was the final authority for how his stories worked and we can only judge his logic by what he left behind in print or his private notes. Unfortunately, there is nothing that explains why a dragon would be confounded, perhaps even disarmed or weakened, by water.

I think that Smaug had a magical anti gravity power which he could control. When he was shot he lost control of his anti gravity and fell down on Laketown and smashed the whole town. So yes, Smaug was as large as Peter Jackson made him and thus needed anti gravity to levitate himself while flying and flapping his wings for propulsion and directional control.

"The rotting piles of a greater town could still be seen along the shores when the waters sank in a drought."

Perhaps that was what had happened to the ruined earlier Laketown and if so the men of Laketown would know that they had to quickly knock down the bridge.

Not the answer you're looking for? Browse other questions tagged the-hobbit tolkiens-legendarium dragons or ask your own question.

6
What happened to the treasures the "Master of Lake-town" took with him?
4
What is the name of the Master of Lake-town?
20
How did the One Ring abandon Gollum?
22
What did ships in Middle-earth look like?
6
Why did Thranduil not help the Dwarves of Erebor?
17
How did Saruman's army reach Helm's Deep so quickly?
26
How well do Aragorn and Saruman know each other?
24
Why didn't the Moria record-taker fight more and write less?
84
How did Sauron feed the armies of Mordor?
11
Where were the Men of Lake Town during the battles of Minas Tirith and Middle-earth?