Identify an animated TV series which was copy of Harry Potter

Once I used to watch an animated TV series on Hungama TV (India) which was almost a copy of Harry Potter. While it was on Indian channel, I can tell by cartoon senses that that was neither Indian nor Japanese. It was a western cartoon without a doubt. The release date of the show should be between 1997 (Harry Potter book release) and 2002 (Harry Potter movie release in India) because when I watched the first Harry Potter movie, I was surprised with the resemblance (the book wasn't read by me, yet).

Here are the details I remember about it: 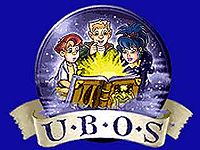 Cassandra/Cassy: The leader of the trio. She has a soft spot for animals and flowers but can become angry when taunted and when someone insults her family. Her ambition is to become a sorceress, as sorceresses are far superior to witches. She also wishes to become a trained healer, because she thinks it to be very rewarding. It is revealed in "Three is a Charm" that she is the great-granddaughter of the great wizard who defeated and banished Zarlack. She is also a master pilot of the "Scoot Zoomer", the means of transport for many students. Cassy's family symbol is a purple diamond which is also the colour that her family members frequently wear.

Gus: He is half Elf and half Wizard. He is quite confident and sometimes acts childishly. He at first looks down on Verne due to his "mortie" status, but Verne manages to redeem himself by saving Gus's life. It is revealed in "Magical Quest" that he is related to a werewolf. Because he is half elf he is attracted to anything shiny, and when he sees something shiny, he says "Ohhhh sparklies". This usually makes Verne have to pull on his hood to keep him out of trouble. He has the ability to imitate voices without the assistance of magic. Gus's family symbol is a green star which is displayed on his shirt.

Verne: He is a mortal (also known as mortie), but he displays magical powers and can naturally mend electronic devices. Because of his mortal status, he is called a "mortie". At some points he is quite cowardly and is surprised by almost anything that involves magic. He is quite skilled at Techno Magic which is good for putting ordinary electronics and/or mechanical devices together to make useful gadgets. At times, he will mess up a spell that does not involve Techno Magic, often with embarrassing results. However, his magic sometimes proves greater than his friends. He came to the school on a scholarship, initially repulsed by the idea of magic and wanting to do nothing with it. He shares a room with Gus. It is later discovered that he is a descendant of the great wizard Merlin because they have the same face and Verne's middle name is Ambrosius which is also Merlin's last name. Verne is given the symbol of three wands united by Cassy later on in the series

UBOS: an elderly looking book that has the power to teleport the three to the centre of the world where they must stop Zarlak. At some points he tends to be quite grumpy (mostly when Cassy stuffs him in her backpack) and hits the three on the head when he's scolding them. It is revealed throughout the series that he is Cassy's great-grandfather. UBOS is also the title character of the series.

That covers the smart girl and two guys, the flying scooters, and the book which transports them, and the timeframe is right. And yes, Ungama had it on their lineup.

3
2000s cartoon set in a magical boarding school, including a girl with a spider headband and a regular kid who got newly admitted