There's a book (and, if I remember, a sequel, though it could have just been a 2nd part of the same book) I read in the 1970s, that probably dated from at least a decade or more earlier, that I've never been able to identify or find again.

The story was about a young alien named something like Martin, Marty, or similar, who comes to Earth, and goes camping (and/or joins the Boy Scouts) with the protagonist young Earthling boy. The sequel, or other part, was about Martin/Marty/whomever returning the favor by inviting the boy back to his home planet, where they go to a perfectly-reconstructed campsite that is otherwise located in the middle of an empty wasteland. I seem to recall that there were a lot of color illustrations.

Any help would be appreciated!

Has to be the book The Space Ship Under the Apple Tree by Louis Slobodkin (the first book of the series by the same name).

Here's one of the illustrations: 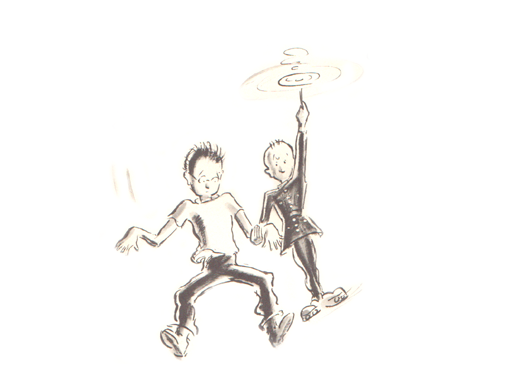 You can see more excerpts and illustrations on a Louis Slobodkin fan site: http://slobodkin.net/books/target98.html

Thanks for the question -- I hadn't thought of this series in decades... used the following Google search terms to find it: alien "boy scout" young adult science fiction

5
Boy who befriends an alien whose spaceship is disguised: a book about friendship