Barely remember a story about an alien having moose-like features

There's a book which I don't remember much about. I probably read it in about year 1979, but that I'm sure dated at least 10-15 years earlier. I've never found another reference to it since then.

From what I remember, it involved a boy and girl who somehow make the acquaintance of an alien that resembles an anthropomorphic moose (yes, really). There was some plot element about how the alien could teleport them. There were also some instances of shrinking force-field around them that they couldn't leave, possibly generated by the alien's moose like antlers. The reading level for this one would have approximated that of the Mad Scientist novels, and the few illustrations were similar in style to those in the Mad Scientist books as well. I don't have too much more to go on, except there was a Roald Dahl-like tone to the book as well.

Can anybody help me find it?

I think this might be The Mystery of the Lost Moon by Michael Chester, published in 1961.

Cathy and Bob Alban are very much like 20th century children except for the fact that they own a real live robot, ride in graviton cars and get a chance to participate in a galactic game with a strange antlered creature from 'way out known as Old Pumm. The object of the game is to recover a lost satellite on which Old Pumm will retire from his hectic orbiting. In their search, they meet an odd assortment of people, reach the moon, a blob of gibbous by accidentally breaking a space egg, explore a space lab and finally realize that the Earth is Old Pumm's lost satellite. There is little sense, rhyme or reason to this, but there is some humor in the crazy mixed-up imagery. A weak plot makes this a poor introduction to the world of science fiction, but members of the inner cult may find it amusing if only at intervals. 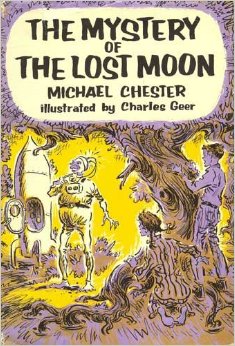 24
What far future novel features nano-biotech and ancient alien warships?
7
partially-remembered SF books (alien, camping, scouting)
8
Short Story about aliens outlawing cars
32
A story about a derelict ship orbiting a planet with spider-like creatures
6
Book about a tongueless teenager who might be an alien
12
Short story about political speeches
5
Graphic novel written in an alien language involving murders and torture