In Spider-Man's story line, is there any other newspaper except the Daily Bugle?

In all Spider-Man related canons that I have read or watched, the only newspaper seen is the Daily Bugle. Since all these canons revolve around Peter Parker, it is justified to have the highest priority for the Daily Bugle.

I always wondered, isn't any other newspaper interested in Spider-Man's stories? With Peter Parker snapping so many great pictures of Spider-Man, no other competitor of the Daily Bugle ever tried to hire him? With Jameson's über-sarcasm any employee would have quit working under him, but still Parker works for him and that too after being underpaid most of the time.

Isn't there any other newspaper in Spider-Man's city?

The main rival of the Daily Bugle, excluding real newspapers like the New York Times and New York Sun (which are referred to but never seen) is the Daily Globe, introduced in Amazing Spider-Man #27 (August, 1965). 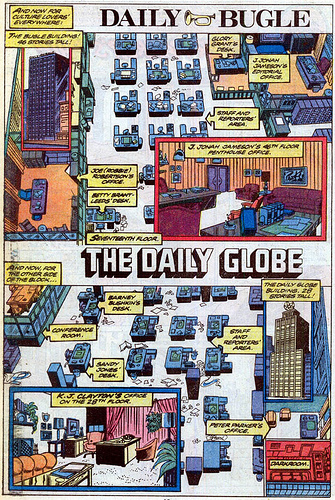 As the wikipedia article notes, the Globe is invariably used as a foil for the Daily Bugle, publishing articles that the Bugle refuses to run (such as that Matt Murdock is the Daredevil for which they get sued) and providing an alternate place for Bugle employees to work, something which Peter does in Spider Man : Marvel Adventures #2 and then again in Spider Man #203