How strong are werewolves in the "Teen Wolf" TV series?

I have just started Teen Wolf and got to wonder about the strength level of werewolves in this universe. What feats of strengths have been shown?

Werewolves in the Teen Wolf universe have shown to be stronger than humans, but not radically stronger.

For example, in the early seasons, several wolves are shown to play sports (primarily lacrosse), and being a werewolf gives them added strength, speed, agility, etc. They are shown to easily break other players' bones and destroy the lacrosse equipment if they aren't careful. However, they never do anything that is obviously supernatural enough to make people question what's going on.

When the werewolves get into fights indoors, they are frequently shown punching through stone pillars or walls, and breaking ropes and restraints that aren't specifically designed for them. On the other hand, jail cells and strong cages are able to restrain them, as are sufficiently strong leather straps (Deaton has these at the vet clinic for just this purpose.)

In a hand-to-hand fight with humans, a werewolf is obviously going to overpower the human, but it's not an instant thing. Styles has been attacked by werewolves and survived: when a werewolf wants to kill a human, it's usually by using their claws, and not brute strength. Though they can easily pick up and toss around a full-sized human, it still takes effort for one of them to beat someone to death.

Also, keep in mind that there are more than one kind of werewolf; there's at least four "degrees" of werewolf: Omega, Beta, Alpha, and True Alpha. Each of those is stronger than the ones listed before it, so e.g. Derek is stronger than any of the other wolves he turned, and

Scott eventually becomes stronger than every other werewolf shown so far.

And he was able to fight the Beast, which was able to cause a mini earthquake with his hands and be able to lift and throw buses, I bet. I would say the Beast is around the hundreds of tons while Scott is around 40 to 50 tons at full strength.

There seems to be no "base strength" equivalent, as to say "the weakest werewolf can bench at least 800 lbs". If anything, this seems to be a highly "personalized" aspect; in one season 4 or 5 episode, Scott, now a true Alpha, is taking on a humongous werewolf bruiser... and while holding his own, he can't overpower the guy by sheer force, to which this warrior says:

I see the eyes of an Alpha... but where is the strength ?

You can see the guy's sheer size compared to Scott and Kira here: 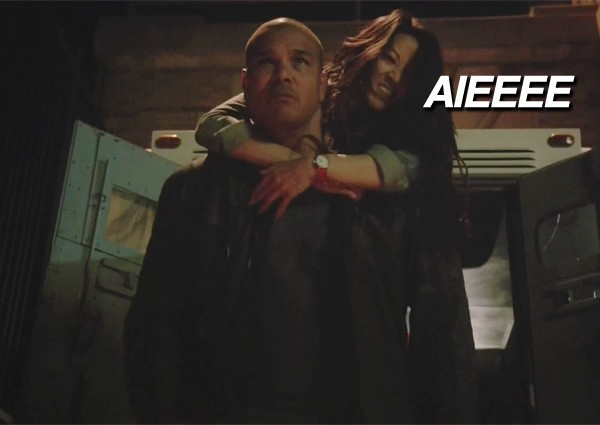 I don't think this was meant as an insult, but a genuine question; the implication is Alphas, regardless of size, are "supposed" to be amongst the physically strongest class of werewolves. This guy, Kincaid, easily outweighed Scott by at least 80 lbs, though and was a good deal taller, so it makes logical sense that he would have more physical power due to sheer muscle force. Concurrently, though, Scott pointed out that the true strength of a werewolf comes from his pack and not his body. One can't be sure if this was purely a philosophy, like "We're stronger together", or an actual biological fact, and the more members of a pack, the greater each one's strength becomes by sharing some kind of bond with the others.

The "strength" of an Alpha isn't necessarily muscular though, but in the "spark of power" that places them, in an evolutionary sense, somewhat above their fellows. This power, from what I've seen, grants them certain advantages:

The fact that there was a pack of Alphas (you'll get to it, not trying to spoil) would indicate a combination of both the aforementioned conditions. Each member was powerful in their own right, with distinct traits. All of the Alphas were immense psychical threats by themselves, doing some seemingly impossible stuff, and together there were curb stomping our heroes until... well, you'll see.

Either way, throughout the series, Scott (a True Alpha) and Derek Hale (a Beta, then Alpha, then Beta who gave up his "spark of power" to save his sister's life) showed that their personal strength could grow via training, the trials they faced, and via the connection they felt with their fellows. Added to this is that their attributes would increase when they "shift" into full wolf form, so technically, their "human form", while stronger than average, was not them at their all-out strongest (think of it as the difference between "base form Sayian" and "Super Saiyan").

If I had to hazard a guess, I'd say a werewolf is somewhere between 3-5 times stronger, faster and more agile than a well-trained human of the same height and weight, with increased durability and healing factor accounting for why they can cause so much damage. In full wolf form, they could probably go up to 6, so roughly on par with a Kodiak bear. This is just an educated guess based on the feats I've seen performed in show, though.

4
Is there an extended universe to MTV's "Teen Wolf" series?