Why would Andrea shoot at a zombie surrounded by four men?

What logical reasoning is there for an untested, unskilled survivor to shoot at what they think looks like a walker when that walker is also surrounded by four men? One of whom is also holding a gun up to that geek's face?

In "Chupacabra", episode 5 of season 2 of the The Walking Dead television series, this scene unfolds when Daryl comes back from near-death and near zombie food. He stumbles out of the woods and the four men (Rick, Shane, Glenn and T-Dog) run up to him, unsure of his state. 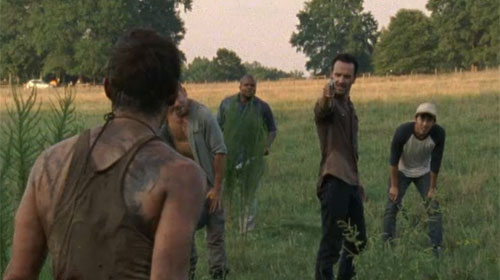 While they're huffing and puffing and the mysterious figure is mumbling, Andrea lines up the sight from the RV. Nobody is moving. They're just talking and Daryl is barely standing as it is. 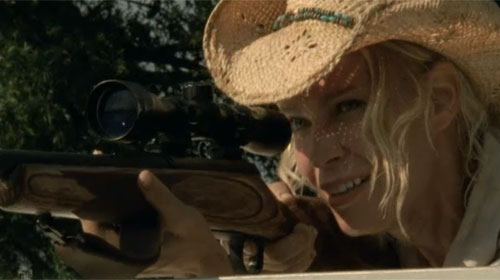 She hasn't proven herself yet to even be able to shoot from a close distance, let alone to take out a target that needs a scope. Let's not forget the four men already surrounding the suspected walker.

Why would she do this? Why risk a bum shot to pop the skull of one of the survivors?

While over-eagerness to show her prowess is one reason why Andrea might do this, there's another possible reason (or at least a mitigating factor). The heightened adrenaline she's experiencing during this threatening situation could be causing tunnel vision. She's so focused on the potential threat that the walker (i.e. Daryl) embodies that she has blocked out all else occurring at that moment around her. Combined with the fact that she is also viewing everything through a rifle scope, which narrows her field of view even further, she could be almost completely ignorant of the nearness of the others to the walker. She's that mentally focused on the perceived threat.

As Keen says, she's just trying to show off how good a shot is.

Keep in mind that for quite some time she has been extremely frustrated by Dale's over-protectiveness, his preventing her from carrying her gun, and her sister's death.

She has had very few opportunities to prove herself against actual walkers. I believe by this point her only one-on-one with a walker may have been the one who trapped her in the RV's bathroom, while her gun was disassembled. In that instance, she defeated it by stabbing it in the eye with a screwdriver, and it was a rather traumatizing struggle for her. She is almost certainly looking at the shot against Daryl as an opportunity to prove herself capable of besting a walker, both to the group and to herself.

As we see later, Andrea has a natural talent for shooting, and in the comic is, I believe, the best shot in the group. Her confidence in her abilities has some foundation, although it is clearly a reckless and utterly stupid thing to do (let's not forget that it is also a direct violation of Hershel's rules about firearms on his property!).

Logical reasoning? There is none, but she's not a Vulcan. She wanted to show off her shooting skills by offing the 'zombie' from across the field. It was a wildly stupid thing to do, as if she was off by just a little, she would have shot one of the 4 people who were standing right next to the 'zombie'.