trying to identify movie with glowing meteorite on a beach

Years ago I saw a movie where a glowing rock was found on a beach. Bad things happened to people who touched it. I think it glowed (possibly red, which would suggest this was a colour film, but that could just be my memory playing tricks). I think it had fallen from space onto a beach in Scotland, and the military became involved. The rock may have been a living thing. Very Quatermass-y. I would guess it was an early 60's British movie.

The Jules Verne novel Chasse au météore features a glowing meteorite on a beach in Greenland. The rock is made of gold, and it's about a hundred meter in size, so it is considered very valuable. As such, the rock inspires greed and animosity among people coming from all around the world to see it. The military gets involved, because a dozen countries are trying to acquire the rock for themselves.

Luckily, the rock can protect itself. It is glowing hot from the heat it's got when falling through the atmosphere, so nobody can even go near it without burning from the radiation. One of the characters, doctor Hudelson, almost dies when he tries. It would take months for the large rock to cool down enough.

The rock isn't living, though before it crashed to earth, it had followed an erratic pattern instead of a regular orbit, thus baffling the astronomers examining it.

The novel has been turned to a black and white movie in 1966 titled in English ''The Meteor Hunt''. I don't know anything about the movie, so I can't tell how much it differs from the novel. 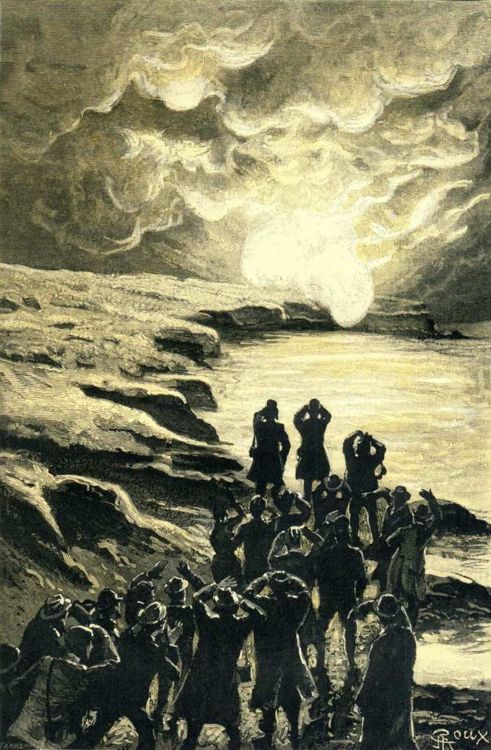 The above picture is an illustration of the glowing rock from the novel (not the film). The illustrator is George Roux, and the digitization is by all the kinds folks at http://jv.gilead.org.il/rpaul/

I can see two possibilities here. The plot sounds very like Dune Roller based on a Julian May Story. Here is the link to the IMDB page.http://www.imdb.com/title/tt0717059/ however this film is not in colour as far as I can tell. This was filmed again as the Cremators in the 1970's. Haven't seen this one so don't know how much it resembles the original story. Here is the link to some info on SF Encyclopedia. Are you sure the film was set in scotland?

One further idea is that it might be the second season episode of Space 1999 called All that Glisters which features a glowing rock although obviously this does not take place in scotland.

12
Trying to identify 80s or older Sci Fi movie with a “Citadel”, a robot, and a sound paralysing rotating crystal
27
Trying to find a short story about a drug that keeps wiping out your short-term memory every few minutes
16
Scifi novel with super-intelligent humans, interdimensional travel and a school for potential enhancees
7
Trying to remember a movie with memory extraction
7
Trying to identify a high fantasy movie on the SyFy channel, two women accidentally bewitch men?
8
Movie with a girl summoning powers from a glowing pyramid