Did Lucas Dump “Han Shot First” for the MPAA Rating?

In the Wikipedia, George Lucas gives his explanation for changing the cantina scene to having Greedo shoot first:

Star Wars creator George Lucas explained the change by stating that he wanted to make clear to children that Han had "no choice" but to shoot Greedo.

But there's also this photo of Lucas during the making of Indiana Jones and the Kingdom of the Crystal Skull: 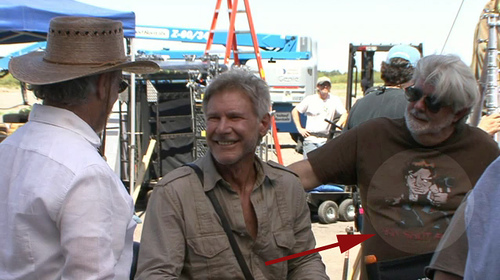 I read elsewhere that Lucas wanted to be sure to keep the PG rating for Star Wars, to keep it more family friendly, not surprisingly, for financial reasons. Unfortunately I can't find my source for that any longer. The reasoning given above could very well be translated to what I think I read about the MPAA rating being the reason for the change.

Is there any documentation or background showing any additional reasoning from Lucas for this change?

The only "explanation" for it is that Lucas revised the original trilogy for his own ends.

Given the tropes Lucas was intentionally emulating and spoofing with Star Wars, Han shooting first would have been acceptable had he been a villain, or at best mercenary, as implied strongly in Ep IV; by the end of Ep V, he's clearly a reluctant hero, and so, when revising, Lucas changed it to better fit the resulting overall arch.

I think it was a bad choice, it's trivial, and wouldn't have resulted in anything worse than a PG rating (he is, after all, at gunpoint and has just had his life threatened when he does so), and Greedo missing at that range with Han not actively dodging is a suspension of disbelief issue. And quite likely, even retaining Han shooting first, Ep IV would likely still be re-classed as a G-Rated film.

After all, the violence in Ep IV is mostly "clean" violence - no gore, no blood, much of it vehicle versus vehicle. Han shooting Greedo was no different on that score.

"Except the original version that went to theaters DID have Han shooting first. So why would he need to change it to get a PG rating if it had already been given a PG rating with the initial release? – " Pg-13 didn't exist in 1977 You could get away with a lot more back then.

Lucas' most recent explanation is below;

"The controversy over who shot first, Greedo or Han Solo, in Episode IV, what I did was try to clean up the confusion, but obviously it upset people because they wanted Solo to be a cold-blooded killer, but he actually isn’t. It had been done in all close-ups and it was confusing about who did what to whom. I put a little wider shot in there that made it clear that Greedo is the one who shot first, but everyone wanted to think that Han shot first, because they wanted to think that he actually just gunned him down."

Since the film had already secured a PG rating, digitally editing it the content would require that scene to be reassessed so it's highly unlikely he would have changed it to secure a lower rating.

84
Does it Matter if Han Shot First?
41
Is that Luke's hand falling down at the end of The Empire Strikes Back?
55
Why did Greedo shoot first?

20
What is the origin or significance of C-3PO's name?
14
Does the novel “Tarkin” include an obscure reference to Peter Cushing's wardrobe problem from Episode IV?
12
Who first had the idea to help destroy the Death Star - Chewbacca or Han?
17
Did anyone involved in Star Wars other than George Lucas think it was a good idea to make Greedo shoot first?
55
Was George Lucas involved with Rogue One?
5
Indiana Jones and the Temple of Doom: deliberate Star Wars connection?
8
Is there an in-universe reason how Princess Leia kept herself and her hair so tightly groomed during the events of the Star Wars movies?