An old book series about stones, teenagers, and parallel worlds

There was this book series I used to read at Waldenbooks back when I was a kid. I have been looking for this series FOREVER and I am yet to find it. The only thing I remember about the book cover itself is a young boy, a raven, and the spine of the book had different round gems set in squares of metal.

The first book had a young teen boy in possession of a red gem/stone, set in gold, that gave him magical powers. If memory serves, there was a gypsy girl in a nearby village who also had a gem/stone that was green. Finding the gems was important since if the evil in the world got all of the gems, they will do the usual bad guy things. The first book ended with a girl from "our" world being sent one of the gems to spoil the search.

Alright, I'm posting this answer, but credit goes to Frock for finding it first.

This is the Tales of the Nine Charms trilogy by Erica Farber and John R. Sansevere, consisting of Circle Of Three (2000), Secret in the Stones (2001), and Islands of the Black Moon (2004). 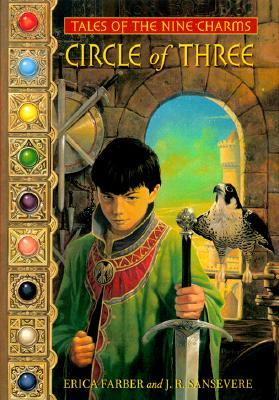 The first volume in a thrilling new fantasy trilogy in which the characters must fight evil using only their wits . . . and nine special charms.

Walker, ever the class clown, reaches into a fountain and finds the joke's on him when he wakes up in a distant world.

Niko wants to be a warrior, but his master insists he learn the ways of a philosopher. What's the good of that?

Aurora can do simple gypsy magic tricks, but even she doesn't know the true depths of her power.

Drawn together by forces they don't understand, to combat an evil they can't imagine, their only weapons are nine simple charms.

Secret in the Stones

Zoe is living the life of a princess in a world she never knew existed, far from her father and stepmother and her California school. The ice-blue charm she found in a fountain back in her old neighborhood must have something to do with her new life and her new good luck. So she’s in no hurry to give up the charm, especially because she thinks it might help her get home–when she’s ready to go.

But Zoe’s pretty blue trinket is one of the legendary Nine Charms and, as its bearer, she is an unknowing participant in an ancient struggle. If she ever hopes to see home again, Zoe must navigate a world of magic that she barely understands. Her every decision will alter the delicate balance between good and evil. And unfortunately, Zoe doesn’t always choose to do what’s right if doing what’s wrong suits her mood.

Islands of the Black Moon

Now that you have reached the magical age of 11, it is time for your inheritance. . . .

So begins the note Lila da Gama receives from a distant aunt, and so begins an adventure that will take Lila much farther than Tiger Lily, her aunt’s crumbling estate. She’ll travel to another world, the Islands of the Black Moon, the place where Lila suspects her father disappeared six years earlier. There she must face terrifying creatures, including a beautiful but evil sorceress, who are all after one thing–Lila’s inheritance. Lila refuses to relinquish her precious birthright, until the sorceress says the six words that Lila cannot resist: I know where your father is.

With a little magic, a little science, and a lot of courage, as well as help from an island boy, this spunky heroine sets off to change her family’s fortune and bring her father home.