Are there any Jedi or Sith droids?

In the films, I only saw organic life forms become Jedi or Sith. Were there ever any droids who could use the Force?

Or is that impossible because of the M-word?

In Zahn's Thrawn Trilogy, Jedi Master C'Boath explains to Luke Skywalker that droids are simply holes in the Force - so, at least as far as c-canon goes, it looks like droids are not capable of tapping the Force.

As far as canonical sources, I don't believe there's ever been an inorganic Force-sensitive (due to everybody's favorite M-word, as mentioned). 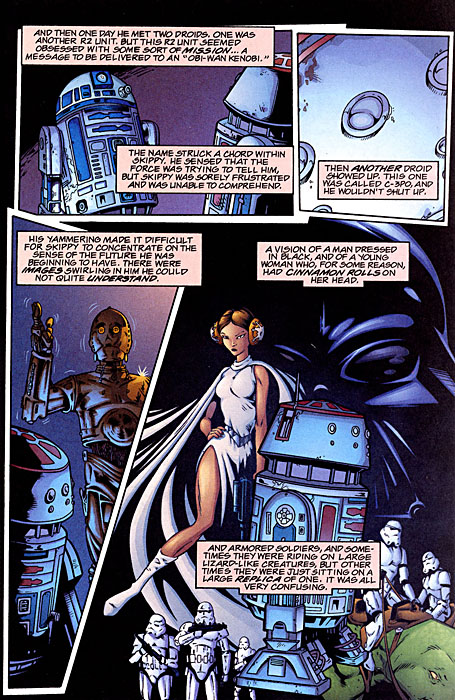 We need some wisdom from Master Yoda on this one:

My ally is the Force. And a powerful ally it is. It is what gives a Jedi his power. It is the energy field created by all living things. It surrounds us, penetrates us.

Life creates it, makes it grow. Its energy surrounds us and binds us. Luminous beings are we, not this crude matter.

That seems to make it fairly cut-and-dried: the Force needs life.

No, but perhaps there could be

To the best of my knowledge, no Force-sensitive droids have been mentioned in canon, let alone Jedi or Sith droids. In Legends, there is Skippy the Jedi Droid, but he was non-canon even back in the old EU days.

As to whether it’s possible for a droid to be Force-sensitive, we can’t be sure. There exists at least one major obstacle to any potential Jedi or Sith droid. The Force possesses a biological1 factor: the midi-chlorians:

A: Midi-chlorians are tiny, intelligent life-forms that live inside the cells of all living things in the galaxy. They do no harm, and help their host use the Force.

These entities live inside all living cells. Since droids have no cells, and are constructed from steel, silicon, and various other mechanical and electronic parts, they lack midi-chlorians. As such, droids have no connection to the Force. 2 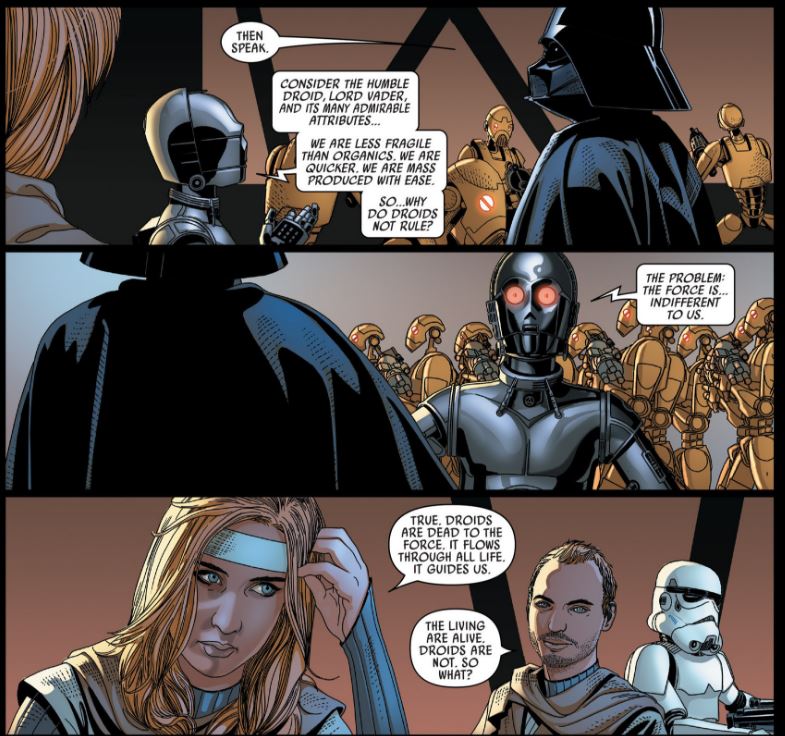 The droid 0-0-0 proposed a way around this, though, one which might enable a droid to use the Force. If a droid were specially constructed to contain human blood, the Force could flow through it: 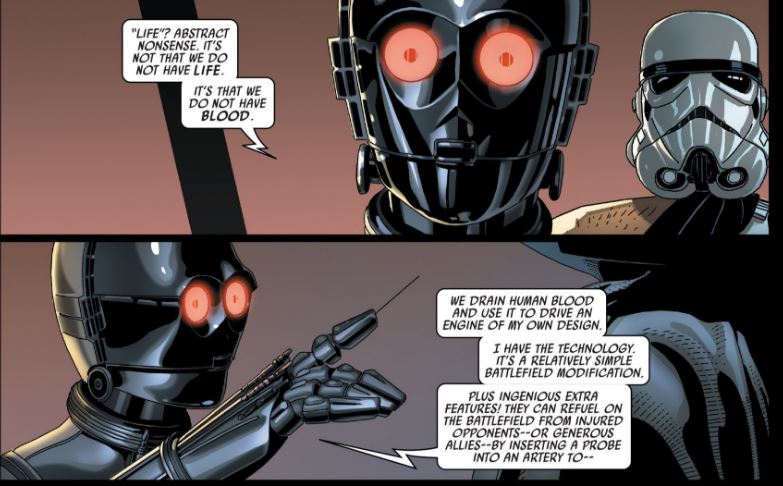 As such, while the average “droid on the street” could not be Force-sensitive, a purpose-built one might be.

It’s important to take this suggestion with several grains of salt, though:

No droid in and of itself was able to use the Force. However, there were droids that made use of biological components that were able to use the force in some way. Specifically in the no longer canon (sorry EU/Legends) book The Cestus Deception "Bio-Droids" make use of an unusually Force-sensitive creature called a Dashta Eel granting them combat capabilities almost on par with Jedi.

I just found out in Star Wars Saga Edition that at level 3, player droid characters may generate an Independent Droid Class which may produce a "Force" effect of up to 5 points. 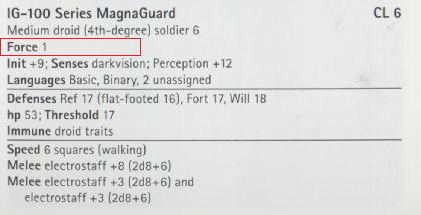 Shards are droid with the Force:

Shards were a silicon-based species native to the planet Orax, who took the form of irregularly faceted cylindrical crystals thirty to forty centimeters in length. Faint pulses of light—thought signals propagating through their "brains"—could be seen inside their bodies. Shards were immobile in their natural state, but could be installed in specially modified droids.

Since droids are not considered living things, the force most likely won't exist with them. But the way technology is in the Star Wars universe, I can easily see a droid use technology to imitate the results of using the force. Like force lightning could be imitated by using an Arc Emitter to shoot and direct bolts of lightning. An electromagnetic field or something like that can imitate the telekinetic form of the force.

In the original trilogy during Luke's training with Yoda, Yoda does tell Luke that all life creates the force but in the same breath he throws a monkey wrench into it and says rocks create the force.

Droids are technically living beings they have personalities and various mannerisms though programmed into them they do want to preserve themselves when endangered as is typical of any living being the only difference between a human/ alien and a droid is that droids are mass produced.

In S.W. K.o.t.O.R. wearing any armor restricts the type of force powers you can use, like Darth Vader and his prosthetic limbs being unable to create blue force lightning but it doesn't say that he can't use other offensive force abilities I.E. force choke or telekinesis.

Droids are living but they are different type of life form they are artificial.

3
Can droids be force-sensitive?
27
Are There Machines That Use the Force?
30
In the Star Wars universe, how are midichlorians supposed to work?
20
Can droids sense the presence of a Force user?
14
Can someone become artificially Force-sensitive?
19
Can any species produce a Force-Sensitive?
6
What happened to the R5-D4 from A New Hope?
1
Force Sensitive Droids/Cyborgs

29
Are there dark side Jedi who are not Sith?
12
Are there any known Jedi or Sith Ewoks?
2
Are there organized groups of Force users other than the Jedi and Sith?
4
Why are manned starships piloted by organic life forms?
8
Can a Sith/Jedi use the force to physically keep someone alive?