Was the fact that McKay is Canadian established prior to the Atlantis premiere?

It is clearly established in the first episode of Atlantis that Rodney McKay is Canadian. He wears the Canadian flag, and pronounces the last letter of the English alphabet as 'zed', and this enables Sheppard to remark that Rodney is Canadian explicitly. This was obviously deliberately done to allow the main protagonists to be international, rather than in recurring roles, since Weir, Sheppard and Ford (and Sumner) must all be American, being pre-existing characters or military.

Was there any indication in SG-1 that McKay was Canadian, or was it invented for Atlantis?

Here is what we know about Rodney as given in Season 5 and Season 6 of SG-1 (He appeared in 3 episodes total prior to the premiere of Stargate: Atlantis):

We're never told explicitly if he's from any particular country. Some character information simply isn't necessary to provide to the viewers, for in- and out-of-universe reasons. As Teryl Rothery revealed in Stargate: The Lowdown (2003), in her first appearances she was only called Dr. Frasier1. She wasn't on contract, so the writers didn't bother giving her a first name until Season 3 when she was established as a recurring character (with a contract). In-universe, she would have always been "Janet Frasier", but we viewers are given more information than we already knew about a character. Just as we find out McKay is Canadian.

1. I would provide a clip of the show if I had it, but MGM has taken down most of the uploaded copies. However, there is a transcript available(note: link is to a .doc file):

TERYL ROTHERY: The arc of Janet Fraiser: well, let’s just say that when Janet first came on board she didn’t have a first name. Basically, I think over the six years, we see how she’s become such an integral part of the team, and a friend of the team and you see how strongly she cares about her fellow members.

This information about first names is funny, because we also don't find out McKay's real first name until his sister appears in SG:A. There, we learn his name is actually Meredith, but that he goes by Rodney (his middle name).

The Making of McKay

There's some ambiguity as to whether or not the revelation of Rodney's Canadian status was added specifically for the show, or if it were added because David Hewlett is Canadian. Also from GateWorld:

When the script for the pilot episode was written, Dr. Weir’s right-hand man was to be Dr. Benjamin Ingram — an African-Canadian scientist who would provide some key techno-babble exposition, but wasn’t necessarily even a member of Sheppard’s off-world recon team. The producers wanted to find someone like David Hewlett, who had played the arrogant yet brilliant Dr. McKay in three episodes of Stargate SG-1 (“48 Hours” and the two-parter, “Redemption”). Then they hit upon a stroke of genius: Why not just have David Hewlett audition?

Note: This quote was written by the founder of GateWorld, which I consider to be a valid source. GateWorld has interviewed numerous cast & crew from the SG franchise, and has had access to a lot of behind-the-scenes info.

So, originally they wanted to have an African-Canadian team member. They then decided to go with David Hewlett. We don't know if he was Canadian on the show specifically fill a Canadian slot on the team, if they just went with the actor's nationality to keep the team more international, or some combination of both. However, since the show itself was also meant to be Canadian-American, and was filmed in Canada, I would expect them to intentionally have a Canadian character on the show, and having a Canadian actor play a Canadian was convenient.

I would also add this excerpt from a Blastr interview with David Hewlett as additional information:

“So I went and auditioned for this role. It was still written ... I can't remember the name of the character now, but I did, once upon a time, before I had a child and I had a memory. I went in and read for this other role, and in the audition, the guy was like, 'Look, they don't want McKay. They want this completely new character. So don't do him like McKay.' And I, devilish as I am, I went, 'Oh, yeah, no, for sure,' and then just did McKay. He would say, 'Well, no, I think it's still sounding very McKay.' And I was like, 'Oh, is it? Oh, okay. Let me do it again.' And I would just do it again very McKay. So the poor guy had this look of 'Oh, I guess that's not going to work out.' And off I went. Then I got the call saying, 'You're doing it, but you're doing it as this new character.' I was like, 'What? How is that going to work? An episode ago I was somebody else,'” said Hewlett.

And, in fact, when he got on the set his character had a different name and was supposed to be a new character. “You'll notice that the first episode of Stargate Atlantis, he's not very McKay-like. His lines are not very McKay-like because he was written as someone else. And then in the second episode they just jumped straight back into full-on McKay,” he said.

Hewlett, an English-born Canadian actor, originally thought his character would be less front and center.

Make what you will of it.

We also know that, originally, McKay was only supposed to appear in a single episode, so much of his background would have been intentionally vague.

“It's the actor's dream. The actor's dream is to come in knowing that you're only supposed to do one episode and then come back because people liked it. I was just very fortunate that the character was written in such a way that he was so obnoxiously fun that I think he hit the right nerves along with the wrong nerves. ..."

David Hewlett, taken from the same Blastr interview as before

We also have Rodney's dialogue to look at as clues. In the SG-1 episodes, we don't see a clear call out to phrases or words that would be clearly Canadian in pronunciation (No "Sorry"s or "Zed"s) in "48 Hours", "Redemption Part 1", or "Redemption Part 2". We do see McKay introduce himself to Jonas Quinn in "Redemption Part 1":

Of note here is that he doesn't give a nationality (he could have). Yes, it was to contrast with the fact that Jonas is not from Earth, but Jonas was familiar with terms like America and United States.

We can also compare the way Rodney speaks pre-SG:A vs post-SG:A. His mannerisms and tones are the same (with the exception of SG:A E1, as noted in the quote). Since he's actually speaking like a Canadian in SG:A, and his speech is the same in SG-1 (not given in any forced, clearly American accent), we can also use that as a clue.

I believe the information tells us that Rodney's nationality was inconsequential on his first three appearances, but was of great import (especially out-of-universe) once Atlantis launched. If nationality hadn't been so important on the Atlantis expedition (and for marketing the Canadian show), then we probably would never have known McKay was a Canadian. They had the chance to indicate nationality on the SG-1 episodes, but they never did.

Since his nationality wasn't mentioned before Stargate Atlantis, it can't be considered a retcon (per se) since there was no continuity to retroactively alter.

Although Rodney appeared in a considerable number of SG-1 episodes, his nationality wasn't mentioned until SGA episode 1 when McKay suddenly sprouted a uniform with a prominent Canadian arm patch. 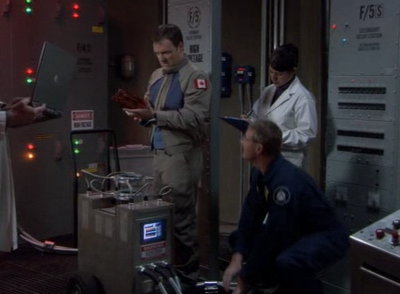 The first explicit dialogue is from SGA episode 3 when Sheppard comments on Rodney's nationality.

SHEPPARD : Uh, listen, Teyla. Don't tell McKay what I said about the hockey not being a real man's sport, because, uh, it's a Canadian thing. They're a little touchy about it.

TEYLA : I am interested in hearing more about this, um, "football" you say you love so much.

As has been noted on a number of occasions, it's not incongruous that a Canadian (or someone who holds dual US/Canadian nationality) would be involved in the Stargate project given the long record of military cooperation between Canada and the US. In the real world this includes shared use of the Cheyenne Mountain/NORAD facility where the Stargate is supposedly based.

McKay also mentions that after his sixth grade science-fair (after having designed a nuclear bomb) he was visited by the CIA. Given that the Canadians have their own intelligence agency (the CSIS) this strongly suggests that he lived in the US from a relatively early age.

His nationality was mentioned in SG-1 when he told O'Niell about the "Zed PM" and Jack was confused till Sam told him he was Canadian.

10
In SGU: Blockade (2.19) where is the actual location that was used for the city?
25
What is that super-secret mission the Odyssey is supposed to be on during Stargate Atlantis' Finale?
4
SG1 - Gemini - Why was not Sam Carter at fault for losing the only weapon that could stop a Replicator?
6
How was the alien ship that attached itself to Destiny not vaporized when Destiny went into FTL?
13
Who played the Airperson who was verbally shoved aside by McKay in "The Intruder"?
5
Was the uprisal that resulted in Goa'uld leaving Earth related to Asgard?
5
How could they use the Atlantis Stargate when it was destroyed in an earlier episode?
12
When did it become common knowledge that the Atlantis Expedition were from another galaxy?
6
How was the full address for Atlantis discovered?