Is there an alternate timeline where Uncle Ben survives and Aunt May doesn't die?

Uncle Ben is one of the few characters who has never officially been brought back from the dead (I think). Which gave rise to the phrase:

No one in comics stays dead except Uncle Ben

There is a timeline, according to Uncle Ben's wikipedia page, where Ben survives but May dies:

A storyline in Friendly Neighborhood Spider-Man has suggested that Ben may be alive. This Ben, however, was actually from an alternate timeline where Aunt May died in a random accident, leaving him to raise Peter. This alternate Ben came to the 616 reality as part of a plan devised by the Hobgoblin of 2211 to defeat the Spider-Men of different eras

Is there any alternate timeline / dimension / universe in which Ben never dies and Peter grows up with both Uncle Ben and Aunt May?

Yes. In the Spider Man crossover comic "Spider-Verse Team-Up #1", Spiderman Noir enters an alternate reality where both Uncle Ben and Aunt May are both alive and well. 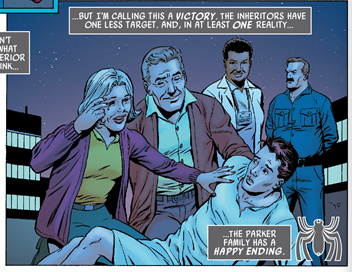 7
In "One More Day," did Spider-Man really have to make a deal with Mephisto?
25
Are there economic implications portrayed in comics where the buildings and cities are ruined almost daily?
13
Has there ever been a fight between Iron Man and the Hulk where one of them won?
7
Has Uncle Ben ever received super powers?
8
Is there any precedent for Aunt May being Spider-Man's techie/helper?