Why doesn't Batman seek out a Yellow Lantern ring?

I've seen a page from a comic numerous times where Bruce Wayne is chosen as a Yellow Lantern, due to his ability to "instill great fear". Here's half below (I couldn't find the first half, where the ring approaches him, but you get the idea). 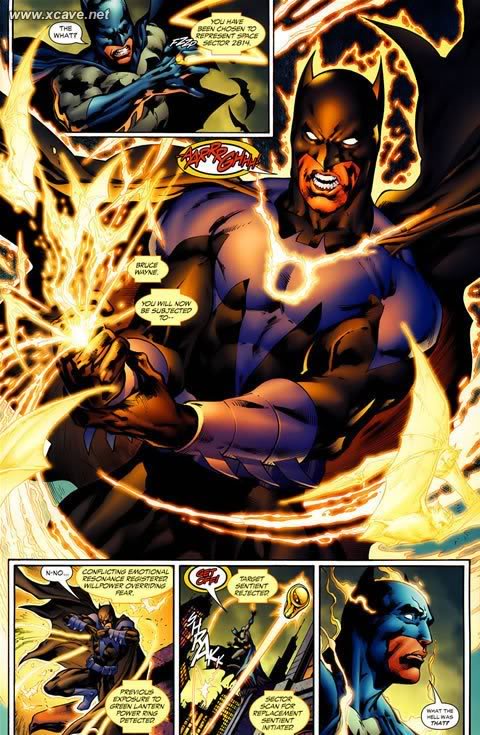 Obviously, in this moment he's surprised and reacting by instinct. The last panel makes it clear that he didn't even understand what was happening.

But it does raise the question, why doesn't Batman seek out a Yellow ring? God knows he's ok with using fear as a weapon, and he's got the imagination and willpower to use a power ring well. He's failed to measure up to being a Green Lantern because of his inability to get over the fear of losing his parents, but presumably the Yellow Corps wouldn't have such a requirement.

No doubt his friend Hal would have something to say about Batman working with Sinestro, but still, Batman and a Yellow ring seem like a match made in a terrifying, terrifying heaven.

Have we ever gotten any stated reason, in any canon, about why Batman doesn't want such a weapon, or why he doesn't consider it worth seeking out? It seems like, for a fear-monger obsessed with gadgets and ultra-preparedness, a fear-based weapon capable of producing any gadget with a thought would be the ultimate expression of his own ideal.

Batman is a man who likes to understand his tools and weapons. Despite his experience with the Green Lanterns, he isn't likely to use a technology he does not completely understand and cannot completely predict. Knowing the yellow power ring has any connection to Sinestro is enough for Batman to steer completely clear of it, given Sinestro's history.

See Also: How does Batman fight magic? and Why doesn't Batman make an armored suit like Iron Man's?

Adding to existing answers, in the Forever Evil comic, issue 4, Batman indeed has a Yellow Ring on his disposal. He plans to use it against the "Green Lantern" criminal, the Power Ring. He puts on the ring, and is horribly defeated by the Power Ring who then easly destroys Batman's Yellow Ring.

Sinestro explains Batman's failure to be a worthwhile Yellow Lantern like this: 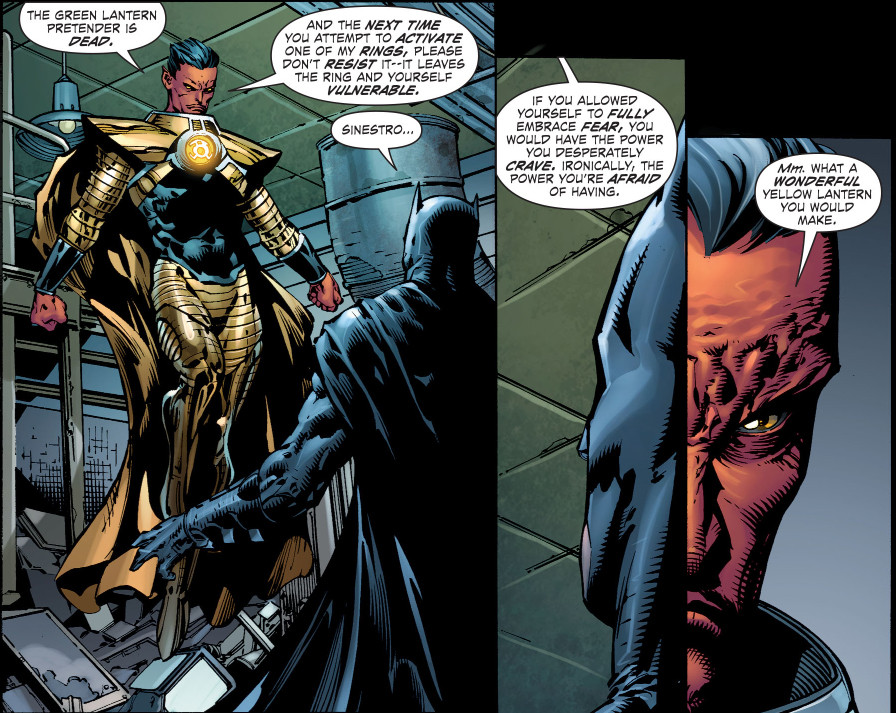 Batman failed because he didn't succumb to his fears. Appereantly that's a requirement. I don't know if it was literally stated in other comics, but I always thought that being scared of something was a prerequisite to be a Yellow Lantern, not only the ability to instill fear.

There was a point where he possessed a yellow ring. When asked by Robin what he didn't keep and use it, he stated simply, "not my style."

Batman uses gadgets made by Lucius for a reason. He trusts Lucius, and knows completely what he uses to make them, and what they can do.

On the other hand, Batman completely hates Sinestro. He doesn't trust him at all, and has no idea what a full power yellow lantern ring can do.

There are some things that Batman would push the limit to do, but having his fears exposed to everyone, and being taken under control by a fear ridden ring, is not something he would do.

Now i think sure, it would be a match made in heaven because instilling great fear into people of Gotham is not a problem.I mean you would think "Oh my god of course he would be great as a yellow lantern I mean, he is Batman after all". But I think that you got to look at the facts of this. Sure he would be good at instilling fear into people,but a WHOLE sector with billions on billions of people.He has only really patrolled a city not a whole sector. So i really think that it would be hard for him to adapt.

I think he would not even bother finding because he had a simple answer,He hates Sinestro, but if it is not the injustice universe then sure he has really never encountered Sinestro but only in the blackest night and brightest day series

Batman does not inherently revel in others' fear and he has strict boundaries which he does not break. He rejects the ring because he knows what it is and that there is not supposed to be more than one at this time. This is the beginning of the Sinestro Corp. he told the Green Lantern at the time about this. Which leads into the blackest night.

He also suppresses his own fear to be Batman, because if he doesn't, he will die.

But the true answer is because he is Batman.

And the yellow ring entity parallax is evil.

40
Why doesn't Batman make an armored suit like Iron Man's?
18
If Batman has such strong will power, why hasn't he been recruited by the Lantern corps?
11
Can anyone wield a Green Lantern ring?
15
How does Batman fight magic?
3
How many different types/colors of Lantern Rings has Batman had access to?