Identifying a book about a girl who has the fey sight?

I was wondering if you could help me find a book I read awhile ago when I was younger. It could be a YA book or a juvenile book, I'm not sure.

I just remember that this girl has The Sight, she can see faeries. There are three faeries that are always with her and they poke and bother her. I feel like it had a darker feel to it, it wasn't a good thing to have the sight for this girl. She ends up going to live with either her great aunt or her grandmother (I can't remember which)in an old house in the woods.

The girl doesn't really like faeries because she's had bad experience with them, but she doesn't hate them. She's gotten used to it by now. I remember one scene where she sees a small dead faerie on the grandmother's/ great aunt's car window. She said that normal people would just see a bug. She ends up burying it because she couldn't leave it there. I just thought I would add that because it's a specific scene that I remember.

I can't remember the whole story, but there's something about the aunt/grandmother's best friend who went missing in the woods, and the girl tries to figure it out. I guess friend was taken by fey or something like that. The girl in the story comes across gnomes that only speak in rhymes and she has to word her question in a rhyme in order to get them to answer her.

I remember that the girl is trying to find out about the mystery of the grandmother's friend going missing in the woods when they were children. When the girl goes into the woods the grandmother's friend is still a little girl and I just remember she's evil now and the woods try to grab the girl as she runs away. I wish I remembered more of the story, that's why I'm trying to find it again, it's bothering me that I don't remember haha.

I just remembered this and was curious to find what the book was called. Thanks for the help! 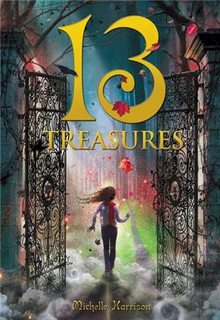 The description mentions a girl who vanished:

Tanya has a secret. She can see fairies.

But not the fairies we imagine. These fairies cast spells on her, rousing her from her sleep and propelling her out of bed. Disturbed by her daughter’s behaviour, Tanya’s mother sends her away to live with her grandmother at Elvesden Manor, a secluded countryside mansion on the outskirts of town.

Then an old photograph leads Tanya to an unsolved mystery. Fifty years ago a girl vanished in the woods, a girl Tanya’s grandmother will not speak of. Tanya is determined to find the truth, but as she unearths more secrets she finds herself dangerously close to following in the missing girl’s footsteps . . .
(description from Michelle Harrison's website, emphasis added)

And I think she does turn out to be evil. Another line, from searching inside the book on Amazon:

Almost immediately she noticed the dead fairy on the windshield. Initially she thought it was an oversized fly or bug.

It seems to match better.

Tithe follows the story of sixteen-year-old American Kaye Fierch, a young nomad who tours the country with her mother's rock band. The book begins in Philadelphia, at a gig her mother's band Stepping Razor is playing in a seedy bar in Philadelphia. After her mother's boyfriend and guitarist, Lloyd, attempts to stab her mother under the enchantment of Nephamael (a knight of the Unseelie Court) her mother takes her back to Kaye's grandmother's house in New Jersey to stay.

Once at her grandmother's house, Kaye begins to look for her old "imaginary" friends she had during her childhood, faeries named Lutie-Loo, Spike, and Gristle. However, she fails to find them and, begins to suspect that they were simply figments of her imagination. Her suspicions dissolve when she finds and saves the life of Roiben, a faerie knight, by pulling an iron-tipped arrow from his chest. In return, he grants her three truthfully answered questions about anything she chooses, which she does not immediately use. Soon after this, Spike and Lutie-Loo contact her and warn her that Roiben is a murderer who has killed Gristle. As revenge, Kaye tricks Roiben into telling her his full name (she later learns that faeries can be controlled by their true names).

Later on, her friends tell her that she is a changeling and that she should keep her human appearance, because the Unseelie Court wishes to use her as a "Tithe" in order to bind the Solitary Fey to the Court's queen, Nicnevin. Since Kaye is not mortal, the ritual will be forfeit, and the fey whom the Unseelie Court wishes to bind will go free. Kaye attempts to control her newfound abilities by enlisting the help of a Kelpie to teach her how to use magic. She is soon kidnapped by a group of fairies, as planned and is taken to the Unseelie Court to go through the sacrificial ceremony. Before the ceremony Roiben takes her to be prepared, having a dress made for her and allowing her to stay with him the night, where they acknowledge their feelings for one another. At the climax of the ceremony, Kaye uses Roiben's name to order him to free her from her bonds before she is killed, resulting in a bloodbath between Roiben and the court before they flee safely. In the process, he kills the queen of the Unseelie Court and many of her guards.

Kaye and Roiben spend the day at Kaye's home, and discover that strange events are affecting the mortal world. Odd reports of mauling and kidnappings are reported on the news and Roiben makes Kaye understand that this is a result of the solitary fey being free for the next seven years. Kaye receives a call from her friend Janet, inviting her to come to a Halloween rave held at the waterfront, she tries to persuade her not to go but fails. After a failed attempt to receive help from her "imaginary" faerie friends, Roiben and Kaye attend the rave. They are separated, and Kaye successfully locates her friends, but briefly leaves them to apologize to Janet's boyfriend for bewitching him earlier in the novel. However, she finds that the kelpie who lives near the waterfront has taken Janet into the water to kill her. In the novel, it is suggested that Janet went with him out of loneliness and a desire to get revenge on her boyfriend for going off with Kaye. Kaye follows but is too late and she manages to convince the kelpie to relinquish her body. Roiben finds Kaye mourning for her friend and gets her home.

The next morning, she and Roiben travel to the Seelie Court's camp some distance away to see if Corny is there. They reach a dead end, but discover that the knight (Nephamael) has proclaimed himself the king of the Unseelie Court. Roiben is suspicious of the situation and thinks that it is a trap for Kaye and him. Later, Roiben's suspicions are proved correct when they enter the Unseelie Court. Nephamael, who had discovered Roiben's true name from Spike before killing him, uses it to take control over Roiben. He orders him to seize Kaye, but Roiben uses trickery to let her get away. Kaye then devises a plan to poison Nephamael, while Corny and Roiben amuse him. She goes through with it; however, before Nephamael is dead, the Seelie Queen arrives, hoping to take over the court (right after her arrival Corny goes insane and stabs Nephamael multiple times, ultimately killing him). Roiben prevents the Queen's takeover attempt by claiming the throne as his.

Rule #3: Don't stare at invisible faeries. Aislinn has always seen faeries. Powerful and dangerous, they walk hidden in the mortal world. Aislinn fears their cruelty - especially if they learn of her Sight - and wishes she were as blind to their presence as other teens.

Rule #2: Don't speak to invisible faeries. Now faeries are stalking her. One of them, Keenan, who is equal parts terrifying and alluring, is trying to talk to her, asking questions Aislinn is afraid to answer.

Rule #1: Don't ever attract their attention. But it's too late. Keenan is the Summer King, who has sought his queen for nine centuries. Without her, summer itself will perish. He is determined that Aislinn will become the Summer Queen at any cost — regardless of her plans or desires.

Suddenly none of the rules that have kept Aislinn safe are working anymore, and everything is on the line: her freedom; her best friend, Seth; her life; everything.