Were the Observers in Fringe inspired by Marvel's Watchers?

In the Fringe universe, the Observers are bald and dispassionate and seem to do little more than observe important events throughout history. Except for once or twice when one of them can't help but interfere.

At least during the first four seasons.

Where have we seen that before? 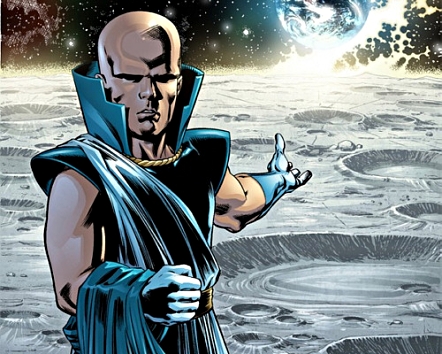 So were the Observers inspired by the Watchers?
Or is there a common trope of dispassionate, bald observers/watchers/recordists that I'm missing?

While there is a degree of superficial similarity in appearance between the Observers and the Watchers, there is little to suggest any connection between the two groups besides the visual nature implied by their group names.

They do have one strange thing in common:

Is it possible the nature of the Observers and their physical similarity to the Watchers are somehow related, a homage or shout-out to Jack Kirby or Marvel or just a really cool idea someone wanted to shoe-horn into a show filled with culture, fan, and science fiction references? You betcha. It's probably very likely.

But very difficult to confirm.

On the Other Hand

There may be a there a common trope of dispassionate, bald observers/watchers/recordists. Observe Exhibits A-D

Not the answer you're looking for? Browse other questions tagged marvel fringe inspiration or ask your own question.

16
How is Colonel Broyles alive again?
4
How could they possibly not know about Observers?
1
Can the Observers not be seen by everyone?
8
Are the Observers really from our universe?
6
Why did the Observers invade?
5
Why dont the observers catch the fugitives?
6
Why Were Observers So Cruel?
7
Do observers revert completely back to normal human form when the implanted technology is removed from their brains? (Fringe universe)
9
Were the events in season 5 of Fringe planned from the start?