Have Sam and Dean never heard of Google? 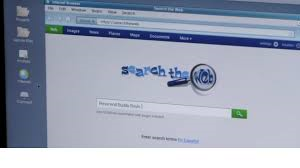 Every time Sam and Dean carry out research they use the search engine shown above. I was wondering if a big search engine like Google or Yahoo even exists in the Supernatural universe? Or this this some special hunter's search engine?

TV Tropes calls this Brand X . As it says on the linked page:

When a script calls for a consumer product, and no one has offered the producers a Product Placement deal, a television program must resort to making up a brand — or, in some cases, obscuring a real brand so that it can't be identified. Another technique is to make a lookalike label that doesn't show the actual brand name — for instance, a bright-red soft drink can inscribed, in white letters, "Cola".

It's a common dodge in all media. At this time, I imagine Google is more concerned with losing the exclusive trademark of their name (as almost happened to Xerox) than they are with trolling for new customers.

Despite "Search the Web" being the search engine we most often see them using, there are actually a couple of references to the Brothers using Google:

Dean: You honor the deceased by driving their truck. Sam, they wrote a whole country song about it. Why don’t you Google it?

Dean: I got the basics from Google. The family moves into a long-vacant house. Uh, one week later, three of ‘em dead by their own hands. Whole family wiped out except for the daughter, which the house is still under her name.

And a couple more references to the company itself, from other characters:

Charlie: I'm gonna die. I should have taken that job at Google.

Supernatural Season 7 Episode 20: "The Girl with the Dungeons and Dragons Tattoo"

Sam: Where's [the old spot where Lucifer's crypt was] now?

Meg: Do I look like Google to you? None of these buildings were here way back in the day.

Sam: We just want some basic information on Crowley. That's it.

Snooki1: Google him. Are we done?

So obviously Google exists in the world of Supernatural and, since so many characters use it casually as a verb, it's clearly gained at least some of the same ubiquity as in our world.

So why does everyone use "Search the Web" instead?

Out-of-universe, Joe L. is obviously correct. In-universe, however, this has never been addressed. I can think of a few possible explanations, none of which are wholly satisfying:

1 Possessed by a crossroads demon. It's a weird show, sometimes

Going off the details from the screenshot (the desktop shortcut names being Projects, Secure Files, Analysis, Internet, and Connect, neither of them have ever bothered personalizing anything about the laptop. It may just be the in-verse default search engine and/or homepage of their laptop's OS, and they haven't bothered to change their default search engine (and/or homepage), and don't want to go to the effort of typing google.com into the address bar.

Jared and Jensen said it is part copyright part the fact that the web sites they go to aren't real.

6
Why did Castiel have to do an "Angelic Cavity Search" to discover what was wrong with Sam?
2
How did 'the trickster' know Sam and Dean were in town?
18
When did Sam and Dean stop saving possessed people and started killing?
9
Why sprinkle Holy water on each other?
1
How did Crowley get the syringe?
1
Is there an explanation for the run of self-referential episodes in Supernatural Season 4?
4
Why hasn't the wider world realised the supernatural in Supernatural?
8
Is there a consistent moral message in Supernatural?
1
Why Sam was about to correct Dean about his “sitting shiva” comment?