When the Jägers discover Agatha in Girl Genius, to whom is Jenka reporting?

When the Jäger's first discover Agatha in Girl Genius, whom is Jenka reporting to (or, at least, seeking instruction from — she may not be in direct contact with whomever she's mentioning anymore)? 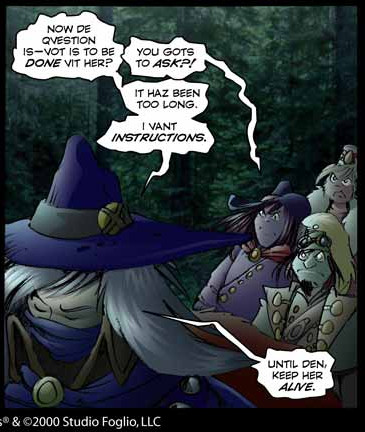 Generally Jenka and "da boyz" refer to themselves as "wild" Jägers and don't report to anyone (with the exception of Agatha). Is there any indication from whom Jenka wants instructions? My guess is that she's waiting for instruction from Bill or Barry; but I don't see anything to support that (or indeed, any other theory).

There hasn't been any definitive answer to this in the comics, to date.

As of the storyline in December 2015, Jenka has resurfaced, claims that she's head of the "Mechanicsburg Diplomatic Corp", and mentioned that she carries a message from the Heterodyne spymaster (if you don't recognize Jenka in the new outfit, Dimo - and the bear! - confirms her identity a page later, although it's hard to see him in that outfit either). Presumably the diplomacy bit is a front for further Heterodyne spy activity, but this does vaguely identify her chain of command as part of the espionage system of the family.

Which goes all the way back to when General Zog mentioned a hidden general who keeps many secrets, and who will remain in the shadows. If wild Jagers like Jenka and Da Boyz report to anyone, this would be the most likely candidate, but until we meet (or reveal) that figure, that cannot be completely confirmed.

in the form of the Unstoppable Airman Higgs. He has way too many hidden connections to the Jagers in general for any normal fellow, and in one tiny slip of the tongue was implied to be an incognito Jager (which things like Mamma Gkika's fleshtone-at-will skin show is possible). That doesn't make him a general, but there's also things like the Castle intelligence recognizing him, making him a bit more well connected than your average spy. This doesn't make him Jenka's superior either, but it does fill in some gaps, as it were.

The original list of possibilities considered in this answer are: one of the Jager-generals, another Jager who was in charge of the "wild and/or exiled" groups, or a family member which if true would likely be Barry (the last one seen to be alive at any point, even if it was years ago, but unless he refused to return for some reason this is pretty unlikely, as finding any Heterodyne was the whole point of the wild Jagers). The only one of these that is even slightly disproven are the three Jager-generals with Klaus (Zog, Khrizhan, Goomblast), who had to be brought up to speed by Oggie in their meeting with Boris. That still leaves five other generals, one considered dead (Osk), only one of which we've met properly (Mama Gkika) and one other seen very briefly (the unnamed Red general, who I've seen fan-named Diabolous, and Gargantua), one apparently AWOL (Zadipok), and too much possibility for anything to be said for certain.

3
How does the Girl-Genius web-comic relate to the Agatha H. books?
3
Girl-Genius - who is Agatha's brother
3
Was the child textbook human or construct/superhuman in girl-genius
2
What did Lucretia need rescued from (Girl Genius)
6
In Girl Genius, is it possible to slaver-wasp a Jägermonster?
4
Is the Dark O(ne) worshiped in Girl Genius?
2
What differentiates a "Spark" from a "Scientist" in girl-genius
2
In "Girl Genius" novel "Agatha H. and the Clockwork Princess", do the Van Rijn Muses contain human consciousnesses?