Robert April in the alternate timeline

Although it wasn't always official, for many years it has been an accepted part of Star Trek canon that Robert April was the first captain of the USS Enterprise (NCC-1701). April was first introduced in The Animated Series, and he has since become a Star Trek fact as far as the Prime timeline is concerned. He took command of the newly-constructed starship in 2245, taking it on its first 5-year mission, before being succeeded by Christopher Pike, James Kirk, and eventually Spock.

In the alternate Star Trek timeline stemming from Star Trek (2009), the Enterprise is constructed a decade later than in the Prime timeline — 2255 to be exact, and Christopher Pike is its first captain rather than April.

According to Robert April's Memory Alpha biography (linked above), he was born in 2195. Likely, he attended Starfleet Academy in the late 2210s or the early 2220s. In any case, he would have certainly been a Starfleet officer by the time of Nero's incursion, if not a captain of a vessel.

Is there any information, canonical or not, on April's career in the alternate timeline?

In terms of alternate timeline canon, we only have Star Trek: Countdown, Star Trek, and Star Trek Into Darkness to go on. Neither of the two films mentions April, and I do not own Countdown and have not read it fully. Does April receive mention in any original novels, novelizations, comic books, or other media, with regards to the alternate timeline?

Within the Abramsverse, Captain April appears in only one officially licensed source, the "Countdown to Darkness" comic prequel series issued by IDW. In it, we learn that he captained a ship called the Enterprise that was constructed between the NX-01 and the present USS Enterprise seen in the new Star Trek films. His death was apparently faked and he's been playing general on a pre-warp planet. 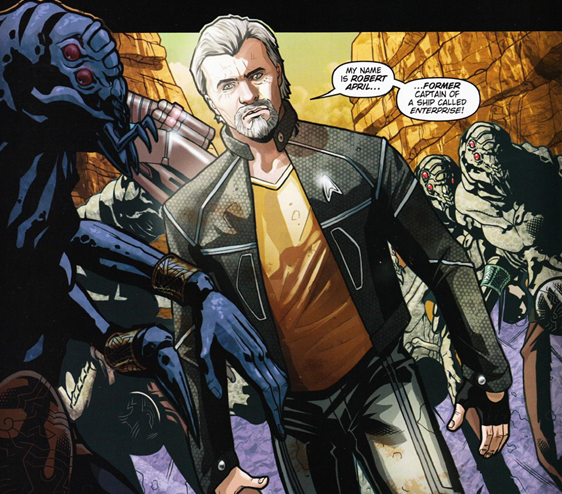 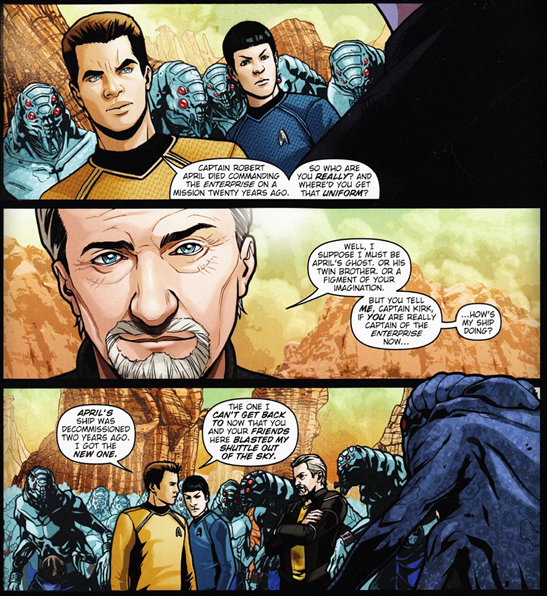 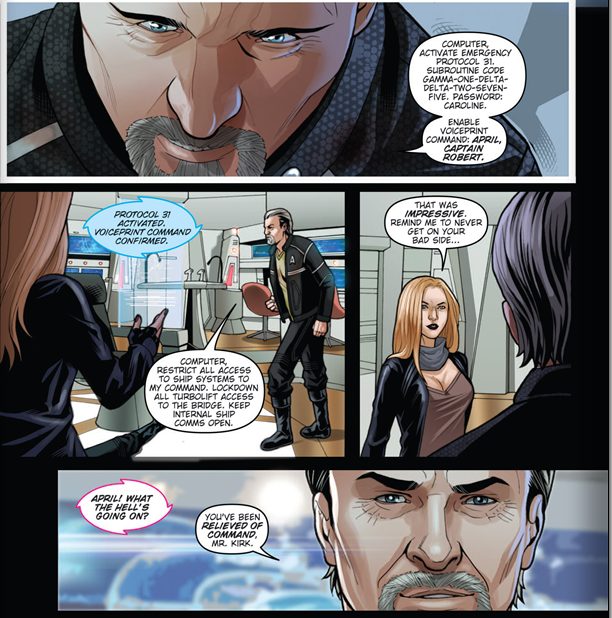 It may also interest you to know that (according to this 2013 webchat from the official Star Trek website. Robert Orci (the screenwriter for Star Trek and Star Trek : Into Darkness) indicated that he briefly toyed with the idea of making the villain of the second film a "rogue" Robert April.

Q. Can you tell us if you considered any other original series villains for the film? Did you ever consider Gary Mitchell? Forgive me if this is already been asked.

In the history of the Galaxy, evil has had many names… Darth Vader… Khan… now, prepare for the greatest foe ever faced by humanity…GARY… ;)

33
How can Star Trek: Countdown ever be considered canon?
23
Why was there a 20-year gap between Enterprises C and D?
9
Crew quarters on the Enterprise in Star Trek (2009) and Into Darkness
31
How would Starfleet know what a Romulan looks like in Star Trek 2009?
14
Was Kirk born prematurely in the alternate timeline?
36
Nacelles: if two are better than one, then why are three not better than two?
28
Why did Spock Prime suggest Kirk take command of the USS Enterprise from young Spock?
57
How did Kirk manage to get Captaincy of the Enterprise despite just graduating from Academy?