In Back to the Future Part II, why is old Biff in a lot of pain?

In Back to the Future Part II, there is a scene where old Biff exits the DeLorean. Here he seems to be in a lot of discomfort. He breaks his cane too. He just made himself a rich man, shouldn't he been seen coming back happy?

He accidentally altered time into a timeline in which he did not exist in 2015.

Old Biff altered the events of time and as such possibly endangered his own future. As you state, Old Biff makes his earlier self a rich and insanely powerful man, basically owning all of Hill Valley.

In a deleted Scene from the movie, that can be found here, you see that not only is he in a lot pain, but he actually disappears from existence. It is my reasoning that once he landed again in 2015, the changes he made started to solidify and as Marty and Doc enters the DeLorean, the new timeline is completed, thus removing Old Biff from existence.

While the DeLorean was still on the ground, there was a still a chance, however slim, for Old Biff to get back and reverse the ultimately deadly changes he made and as such, he was "only" in pain (similar to what Marty felt when playing at the Enchantment under the Sea dance before his parents kissed), but when the DeLorean took to the air, that chance disappeared and with it, Old Biff.

The official BTTF FAQ, found here, states, admittedly rather jokingly, that Lorraine shot Biff around year 1996 in the new timeline. Whether this exact event actually happened or some other ill fate came over him between 1985 and 2015, we can assume that he no longer existed in the 2015 in the new timeline and thus disappeared from existence.

Gale: Our intention regarding old Biff was that upon his return to 2015, he would be erased from existence because he had changed his entire destiny by giving his younger self the Sports Almanac. (Probably, Lorraine shot him sometime around 1996!)

What you are asking is a basic time - paradox confusion, the 2015 Biff has not led a very good life, thanks to the intervention of 1985 Marty in the 1955 Prom Night Timeline.

This 2015 Biff goes back to the 1955 timeline and gives his 1955 counterpart the sports almanac which will improve his situation. So whatever change that happens will happen to the 1955 Biff. And the only one to know the change will be the 2015 Biff.

As explained by Doc. Brown to 1985 Marty when he comes to the alternative 1985, that the time line got skewed to an alternative dimension, which is real to everyone except the one's who at some point were in a time machine i.e. him and marty (he also references to his dog einstein).

Let me illustrate with the drawing did by Doc, 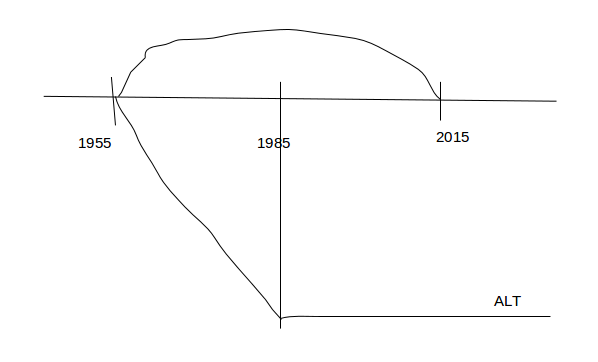 The 2015 Biff goes back to 1955 and hands the alamanac and returns back to 2015. Physically he still IS THE SAME PERSON, because he immediately comes back to the future before the 1955 Biff does any changes to his actual timeline. So for him, the actual timeline is the timeline. i.e. in this timeline Biff is poor and unhealthy and Marty and his family are well to do.

But when Marty goes back to the present (i.e. 1985) from 2015, he enters the alternate time line which has skewed. In this 1985 timeline Biff is an evil corrupt billionaire.

And from that alternate point in time (i.e. alt 1985), if Marty had gone to 2015 (to change 2015 the Biff from using the time machine) he would have gone in the alternate 2015 because the timeline had already been altered (THIS WAS POINTED TO HIM CORRECTLY BY DOC BROWN). In that alternate 2015 Biff would be rich and happy. As a result marty had to travel BACK IN TIME (i.e. to 1955) to stop Actual 2015 Biff from giving almanac to Actual 1955 Biff.

We can't, because if we travel into the future from this point in time, it will be the future of this reality, [indicates in chalk the alternate reality, 1985A] in which Biff is corrupt, powerful, and married to your mother, and in which this has happened to me! [holds up a newspaper reading "EMMETT BROWN COMMITTED"] No, our only chance to repair the present is in the past, at the point where the time line skewed into this tangent. In order to put the universe back as we remember it and get back to our reality, we have to find out the exact date and specific circumstances of how, when, and where young Biff got his hands on that sports almanac.

There was a short companion VHS released after the BTTF series (I believe it was called "The Secrets of the Back to the Future Trilogy") that went "behind the scenes" to show how the movies were made and offer insights from the SFX guys as well as the producers. In this tape, the deleted scene is given the context that in the new timeline Lorraine shot old Biff many years before he got into the DeLorean, thereby causing his pain shown before he breaks his cane getting out of the DeLorean.

In that scene he is then erased from existence as he is on the ground next to the DeLorean.

The film's writer, Bob Gale spoke to this question in a Q&A session for the Official BTTF magazine. The short answer is that his pain was caused by having changed the future enough to erase his own existence.

Our intention regarding old Biff was that upon his return to 2015, he would be erased from existence because he had changed his entire destiny by giving his younger self the Sports Almanac. (Probably, Lorraine shot him sometime around 1996!). After old Biff clutches his chest and staggers (the same symptoms that Marty exhibited in Back to the Future when he was beginning to be "erased"), we actually filmed him falling onto the street and vanishing, and we previewed the movie this way (see The Secrets of the Back to the Future™ Trilogy). However, the vast majority of the audience did not understand it, so we decided to cut it out, leaving the answer ambiguous, and subject to various interpretations — besides the above explanation, you can believe that Old Biff had a heart attack from the shock of time travel of from flying the car, or from something that happened to him in 1955.

Purely on speculation... Despite that Biff was shot in the alternate timeline, and that he was fading out of existence (great deleted scene, btw!):

When the timeline changed around Marty, he did not "feel the pain" of what happened to the alternate Marty (yes, I know that in BTTF he did feel it when he started to fade, but when he went back to alt-1985, stuff that happened to alt-Marty did not automatically happen to him), why do we expect this to happen to Biff?

Another reasonable explanation is that he was old. He might have been dying the whole time. The shock to his system both physically and mentally to both

a) Travel through time, and b) Meet himself,

combined with the fact that he was trying to get in and out quickly (even with a time machine, he still needed to avoid getting caught!) could have just been too much for him to handle, and so he died... Conveniently as he was fading away (watch the scene; he does collapse as he fades away).

Actually the answer to this question is much simpler. The question was why is old Biff in pain. When he exits the Delorean he reaches back for his cane which is stuck in the car. When he gets it loose he whacks himself with it and the top breaks off and gets left in the car which later becomes a key piece of evidence.

4
Do any other dates in Back to the Future have any significance out of universe other than November 5?
9
Where did 2015 Biff hide the Delorean in 1955 when giving himself the Almanac in BTTF 2?
8
Why didn't Old Biff keep the time machine?
6
Wouldn't giving the Grays' Sports Almanac to Biff change the outcome of the games after 1955?
14
What memories did "Old Marty" have in 2015 of his time travel adventures?
2
How could Marty not see Biff stealing the DeLorean?
28
Was the joke about Japanese electronics cut from Back to the Future?
15
Why does the recording about Twin Pines Mall not change the same way the newspapers and photographs change?
2
Does Back To The Future ever directly (visually) contradict itself?