How did Goldrush get her powers?

I recently ran into a picture of this panel from Justice League #18 where the character Goldrush says she won her powers in her second divorce. 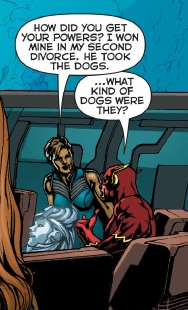 TL;DR: We have no idea, but if her powers come from something that can be handed over then she could telling the truth about how she got them.

Goldrush is a fairly recent addition to the DC Universe, and we know next to nothing about her. She was invited to become a reserve JLA member by Cyborg. Since her introduction, though, we have yet to see an origin story for her or even an explanation of her powers. To date (July 2015), she hasn't been seen since the five-issue arc that introduced her.

What we do know is that she appears to be from Texas and has the ability to cover herself in an organic alloy that resembles gold. Similar to Colossus of Marvel's X-Men, this covering grants her increased strength and a degree of invulnerability. The covering can apparently be activated or deactivated at will, and automatically deactivates when she is knocked unconscious. 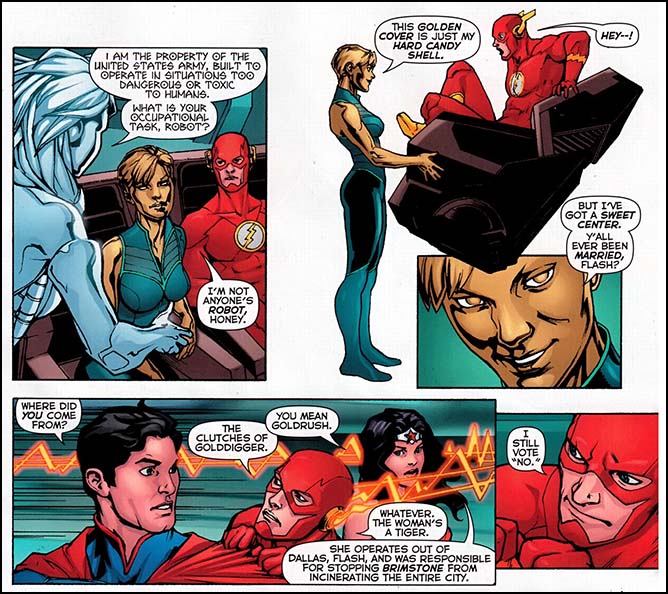 If her abilities turn out to be based on technology, a chemical formula, or an alien artifact (virtually anything that could be handed over to someone else), then it could indeed be something she won in a divorce.

Adding to Omegacron's answer, Goldrush has not been seen much since Justice League #16-20, in 2013. Most information on-line is speculative, but some have made a connection to DC's Wildstorm property Wetworks, which featured characters with the same exact powers as Goldrush.

After a number of jobs, they were sent on a mission to destroy and enemy base and steal a "biological agent" from it. The agent proved to be a number of symbiotes being developed by the undead Vampire Nation, golden "skins" which the nospheratu had hoped would allow them to walk in the sun once more. The team successfully appropriated them, but were horrified to be confronted by a second squad sent by their superior Miles Craven to eliminate them and collect the "Gold" on completion of the mission. Mother-One, the leader of the second squad, changed sides, and in the confusion, Dane's team were bonded to the Gold.

The relevant issue being that Wildstorm characters and property has been added into the DC New 52 Prime Earth continuity, including a reimagined Team 7 from which Wetworks was born.

So there is no current canon information to confirm this, it is implied/can be inferred.

Not the answer you're looking for? Browse other questions tagged comics dc or ask your own question.