Why do characters from Marvel and DC Universe have muscular physique most of the time?

I know there are many main characters who don't fall under this category, characters like, Quicksilver, Blob, Kingpin and so on. Some characters don't have buffed up physique because of a certain disability or condition (Charles Xavier). They all have an exceptional reason for this however.

I mean in reality, if soldiers or sports personalities are to be considered, they are strong and hyper active. But many of them don't have the same bodybuilder-perfect physique.

For example, Cyclops could use his superpowers and still be of normal physique, as he can rely on shooting eye-beams to defeat enemies. Wolverine, on the other hand needs a good physique as he has to fight using raw strength even while using claws, but not the bodybuilder-perfect physique we often see him with such as below:

First, because comics are essentially wish fulfillment media, for the creator and for the audience. Starting with Superman, who was the model of wish fulfillment for Jewish boys at a dark time to be Jewish, every main character superhero is the "ideal", strong, smart, gets the girl. The ideal look changes over the decades (the EXTREME 90's and their super steroid look for example). It is escapism fantasy for their target audience. 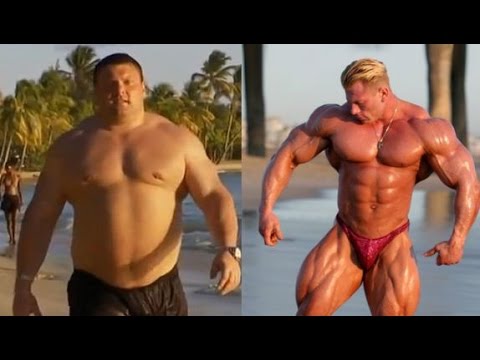 A good description of the two is in this image by Kelly Turnbull of Manly Guys Doing Manly Things (see "Tutorial Thingies"): 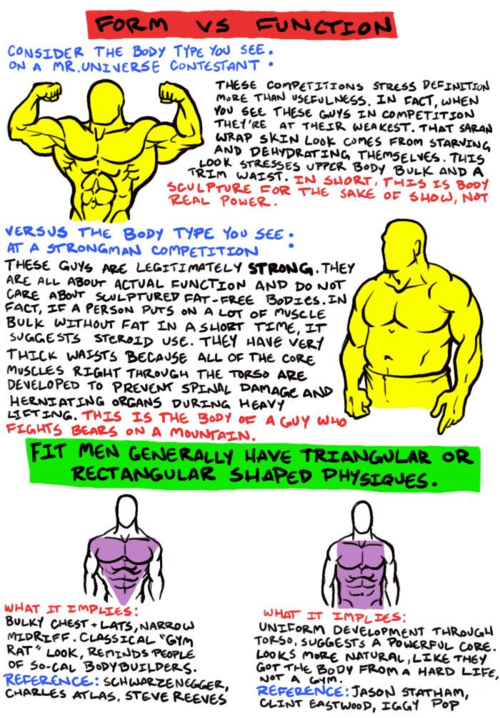 Consider the body type you see on a Mr. Universe contestant:
These competitions stress definition more than usefulness. In fact, when you see these guys in competition, they're at their weakest. That saran wrap skin look comes from starving and dehydrating themselves. This look stresses upper body bulk and a trim waist. In short, this is body sculpture for the sake of show, not real power.

Versus the body type you see at a strongman competition:
These guys are legitimately strong. They are all about actual function and do not care about sculptured fat-free bodies. In fact, if a person puts on a lot of muscle bulk without fat in a short time, it suggests steroid use. They have very thick waists because all of the core muscles right through the torso are developed to prevent spinal damage and herniating organs during heavy lifting. This is the body of a guy who fights bears on a mountain.

[Rectangular]
What it implies:
Uniform development through torso, suggests powerful core. Looks more natural, like they got the body from a hard life, not a gym.
Reference: Jason Statham, Clint Eastwood, Iggy Pop.

So the typical comic book physique is not realistic either, the only thing that it is, is wish fulfillment. "Hey boys, muscles are cool, and all the cool heroes have muscles."

Of particular note, Kingpin, who has a fat bulky look, is physically stronger than even many meta-humans. Stronger than Spiderman, Dare Devil, The Punisher, even Wolverine. He fits the Realistic Strongman type.

Short answer, because historically, in media, Heroes have muscles. It dates back to concepts of physical perfection being evidence of essential goodness and it goes as far back as ancient statues from Greece and up to our current comic and action stars.

In terms of in-world justification, most of these heroes keep in pretty constant action, whether it's actually physically fighting or it's just trying to make sure you can get from point A to point B without blacking out. Cyclops can shoot beams of optic force from his head without physical exertion, but getting to where he can make the shot, and avoiding attacks from his enemies, is going to require strength and cardio, so he no doubt trains to keep in shape in much the same way that a drone operator in the military maintains PT because they never know when they're going to have to sprint across the control center to avoid an incoming missile strike or to throw a breaker to get their device back up and running (there's also a strong element of exercise as a means of camaraderie and breaking down the individual, but that's a bit of a digression). And, as per CDE's comment, Cyclops, as team leader and possessor of an extreme Type A personality (and a huge stick up his butt), would likely be pushing himself even harder in the gym to ensure that he's not the weak link.

There is also a degree of shorthand in that a fit individual is not necessarily a toned individual (bodybuilders and action stars train in specific ways to look muscular but actual muscle can look like anything from defined tone to just looking bulky), but it's hard to convey that on the page since, really, a fit person tends to look like everyone else, so instead, you get exaggerated physiques.

There can be no answer as to why "most" comic book characters have muscular physiques; it comes down to why these characters individually do. For examples:

Spider-Man got his slim, yet muscular, build, not from exercising, but from his radioactive bite. His metabolism allows him to not have to make any effort to keep it, but even if he had to, his constant swinging and fighting would most likely keep him in that superhuman shape.

Captain America was foremost a soldier. In some cases, he is written as very muscular when he joins the war, but in others (like the Marvel Cinematic Universe), he is very slim and eager:

"In 1942, Steve Rogers is deemed physically unfit to enlist in the U.S. Army and fight the Nazis in World War II. Recruited for a secret military operation, he is physically transformed into a super-soldier..." - brief origin of MCU's Captain America from Wikipedia

So, his physique comes from (in some iterations) training as a soldier, but mostly from the super-soldier serum that turned him into the invulnerable weapon we know today.

Batman, as all Batfans should know, had extensive training since childhood under his butler and friend, Alfred, rather than through other means like a serum or radioactive bite.

There are also comic book characters that are usually, if not always, written and drawn without buff builds. In addition to the few you listed, Tony Stark is sometimes depicted with an "average" build, since, although he works out occasionally, his suit pretty much fights for him.

Despite all this, it was once common for heroes and their villains to be the larger-than-life muscular characters we know them as today. Writers wanted kids (their foremost target audience) to look up to their creations, and kids tend to see characters with muscular builds as bold and fearless, while also strong and fearsome.

So, to get to the point of the answer: Because during the time comic books were rising to creation, it was common for the titular characters and their adversaries to look as strong and fearless as possible. However, there are numerous, canonical reasons for these characters to look the way they do.

The reason why nearly every comic book character in existence, especially in the past, seemed to follow the same basic body (and facial - seriously, give it a look sometime) templates was because comic book artists were under tight deadlines and needed to cut corners wherever possible. To this end, everyone had the same basic build (as noted) and, more importantly, one of the reasons they all wore spandex; all you had to do was sketch a basic nude figure and add some accents (and a cape). I'd imagine this is less the case nowadays because computers, but after forty or fifty years it's pretty much tradition.

Source: The Complete History of Marvel Comics by Les Daniels.

its worth pointing out (along with other answers/ angles) that evolutionary psychology has some basic explanation for what is considered attractive by both sexes and this shows up across all mass media, including comics, and the nuances of this are under active research in psychology (while it can be dated somewhat to Freud, evopsych is very modern, not a very old scientific field). research in the area has now identified effects that muscular men have on female mate (aka in human realm "dating") preferences. more masculine men (along with beautiful women) have different mating tendencies/ patterns. wrt evopysch theory, muscular men are simply the opposite side of beautiful women. notice of course that many female comic characters are also muscular but it is typically more pronounced in the male characters. in short muscularity is a sign of health/ evolutionary fitness that is part of human preference and translates into media and stories.

Rather than target this from a sociological or art perspective, I'll tackle this from a science fiction angle.

Acts of heroism usually require strength, be it lifting a bus to free children or punching a super-villain into the sun. All this requires strength of some sort. Leaving aside super-natural sources of strength (magic, physics), acts of strength required and build muscle. Steve Rogers and Peter Parker are superheroes because they received augmentations that build their muscles to allow them to be heroes.

Muscle requires a lot of calories to maintain, acts of strength require calories to perform. Heroes rarely get a lot of downtime, and are frequently called upon to act. This means eating massive amounts when and where they can.

To a certain extent science fiction is fiction, but energy comes from somewhere. Brain power is one of the largest drains on human energy, so physics or mental heroes, including Professor X, Magneto or Storm are all actively thinking at levels far beyond human people - which requires chemical energy, food, to perform. This is backed up in canon by Amadeus Cho who is explictly stated as need to eat lots after his superhuman calculations.

Lastly, Wolverine is constantly carrying many kilograms of metal on his bones, every action for him is weightbearing. His immense healing factor requires an intense metabolism.

Heroes bodies have to adapt to prioritise repair over storage.

Fact 3. Heroes hang out with other heroes.

Cyclops's power comes from his eyes, but he is hanging with people like Wolverine and Quicksilver. He can never be as strong or as fast as them, but he still needs to hold his own. Also, these are para-military groups working with little support, if team members go down, which frequently happens, they need to be able to get them out. Physical training is a requirement of the job.

In the movie XMen: Days of Future Past Mystique was shown working out, not for her looks (she can look how she wants) but so she was trained and able to keep up with the abilities of the rest of the team.

Fact 4: Superheroes are human after all

Lets also not forget that heroes are human with all the same flaws. If you are Tony Stark standing next to Steve Rogers in the Avengers showers after a big day of fighting, you are going to feel a little diminutive, so you might work a little harder to prove even without the suit you can hold your own.

18
How did Doctor Octopus survive even one punch from Spider-Man in Spider-Man 2?