Did Luke Skywalker go to the Dark Side?

I remember reading something about Luke Skywalker going to the Dark Side for a short period of time, but I'm not a hundred percent sure on this. Did he turn to the Dark Side?

You're referring to the Dark Empire comic book miniseries, published in the early 1990s. Dark Empire as a series was about the return of Emperor Palpatine1 and his renewed attempts at Galactic domination.

However, a significant subplot of the first Dark Empire series was Luke joining Palpatine, intending to eventually destroy him, and being sucked into the Dark Side2.

Having said that, though, I personally find it hard to argue that Luke really fell to the Dark Side. Although he does agree to join Palpatine, his intent was to take down the Emperor from the inside, and he actually did a pretty good job of it; while ostensibly a servant of the Dark Side, Luke remotely destroyed at least one of Palpatine's latest superweapons, stole the command codes to the rest, helped Han and Leia escape the Emperor's stronghold on Byss, and made a solid attempt to destroy Palpatine once and for all. And this in the span of weeks, while it took his father decades to do half as much. 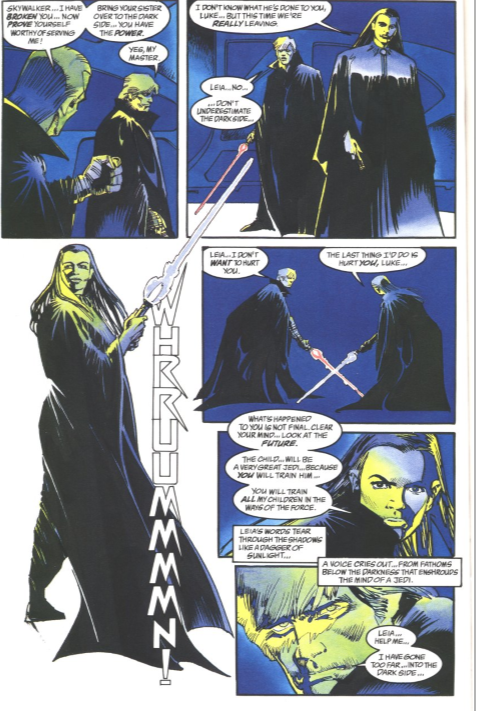 They cross sabers once, with no evidence that they had any more of a fight than that; Leia says "Hey bro, remember how you're all...not evil?"; Luke says "Oh yeah..." and that's it. I mean, I know that by this point he's been Palpatine's apprentice for like a week, but still. If he'd actually fallen to the Dark Side you'd expect a bit more drama than what we got.

1 Because, as I've noted before, coming up with original villains is just so hard you guys

2 Must run in the family

You're thinking of the Dark Empire comics published by Dark Horse comics in 1991.

In this story, Luke falls to the Dark Side and becomes an apprentice of a resurrected Emperor. 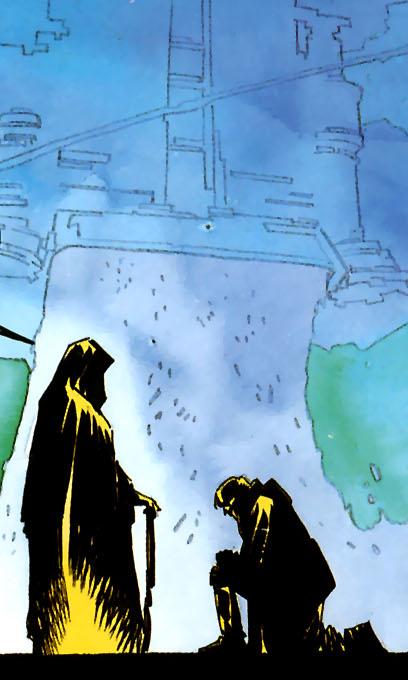 Not in relation to the Dark Empire comics, in Return of the Jedi he started the "journey down the dark path" with the uncontrolled rage he used against his father. Throughout the books written afterwards, there are references to him having gone down that path and being touched by the dark side...especially during the time of Jacen Solo, in the Legacy of the Force series, and his turn to the dark side. However, he never gave himself fully to the dark side.

It's not canon, but Luke is turned to the dark side by Lord Starkiller on Hoth in the Ultimate Sith edition of the Force Unleashed game: http://theforceunleashed.wikia.com/wiki/Fallen_Luke

During the match, Luke remarks that Starkiller was making Luke angry. Luke is then defeated by Starkiller who mocks him on destroying him as he destroyed his father, Luke screams in anger and falls to the the dark side as Fallen Luke.

Luke gives himself over to a cloned darth sidious.. after he falls in love with Mara jade. Who later becomes his wife. He willing went to the dark side so she would be released and not harmed.

Not the answer you're looking for? Browse other questions tagged star-wars jedi luke-skywalker jedi-training or ask your own question.