Did Agent Smith have the power to fulfill Cypher's wish?

In The Matrix (1999), there is a scene where Cypher and Agent Smith strike a deal.

Smith wants the access codes to the Zion mainframe. Cypher offers Morpheus, who knows these codes.

Cypher values ignorance (which is "bliss"), and wants to retroactively take the blue pill; getting re-connected into the Matrix, sans the memory of the real world. He also wants fame and glory.

How would Smith be able to fulfill his end of the bargain? How was he affiliated with the machines at this point? In the third movie, The Matrix Revolutions, Smith was a self-replicating virus, and even Deus Ex Machina wanted him gone. Was he working with/for the machines before this? I always thought the agents were "self-employed" so to speak.

Agent Smith was an agent of the system until after he was destroyed by Neo at the end of The Matrix (when Neo entered his body and caused him to explode). So Agent Smith was working with the machines and was not a virus throughout The Matrix (including his meeting with Cypher). You can tell because he is wearing his earpiece throughout The Matrix but he gives it to Neo at the beginning of The Matrix Reloaded (his suit also turns black -- instead of green -- and his sunglasses change once he becomes a virus). The earpiece is symbolic of his status as a "slave" to the system; when he hands over the envelope with his earpiece at the beginning of The Matrix Reloaded he says:

I have something for him, a gift. You see, he set me free... 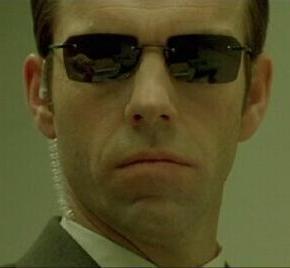 To fulfill Cypher's wish, the machines would have to re-insert Cypher into the Matrix and erase his memories. There is an example of the machines re-inserting a red pill into the Matrix in the comic Saviors, though in that case the red pill's memories were not erased (he didn't request it). The machines have also demonstrated remarkable abilities to erase the memories of humans (e.g. they can reload the entire Matrix every time The One completes his cycle) so the machines are capable of erasing Cypher's memories.

Since Agent Smith was still working with the machines at the time of his meeting with Cypher, and the machines are capable of granting Cypher's wish, it would have been possible for Agent Smith to fulfill his end of the bargain.

I am afraid I have to disagree with Null. For the first part of his answer, we are exactly on a same ship. in one of the first scenes of matrix reloaded me here this dialog

based on this dialogue, it is obvious that agent smith wasn't free before his first serious encounter with Neo.

In a part of the movie (I couldn't find the transcript even with great effort), it is mentioned that free and powerful version of agent smith exists only because some codes related to Neo is copied to agent smith code after Neo defeated him at the end of the first movie.

Even The Oracle mentions in a dialog with Neo that Agent Smith's evolution is the answer of the system to the anomaly that is created by Neo; "the result of the equation trying to balance itself out." And the rise of Neo starts at the end of the first movie; it is the moment that his mind is really set free.

But for the second part I think he is using a wrong interpretation of the word 'reloaded'. In the famous dialog between The Architect and Neo, it is mentioned that each time they destroy the whole zion and whole samples (humans connected to the Matrix) and they choose if I remember correctly 5 men and 12 women from Zion to rebuild the Matrix. So it doesn't really mean that they can manipulate human memories.

Anyway in another dialog between Morpheus and Neo, Morpheus says to Neo that they can't let a freed mind go to it's previous state (connected to the Matrix). So from this dialog it may be concluded that this process is possible.

Not the answer you're looking for? Browse other questions tagged the-matrix agent-smith or ask your own question.

36
Why did Cypher trust the Agents?
9
Memory control in the Matrix

25
What happened when Cypher was freed from the Matrix?
5
Why is Agent Smith okay with becoming a virus?
27
How did Agent Smith know that Morpheus contacted Neo?
30
Why did Agent Smith & co. pursue (pre escaped) Neo through the Matrix instead of going to his pod?
82
What's the purpose of the earpiece Agent Smith is wearing?
68
Is Agent Smith a bug in the Matrix or a virus?
14
Did the Oracle corrupt Agent Smith?
4
Why did Neo believe he could trust Deus Ex Machina when he made a deal for peace?