After Lord Voldemort is resurrected in HP:GoF, he is always seen wearing a long black cloak which covers him below the neck, except for his hands. Since Lord Voldemort is Slytherin-based he is more influenced by snakes. Even his looks are snakelike. Slit-like nose and face and so on. Also, most of times when travelling over distance, he is shown to fly in cloth like orb form which all Death Eaters do.

What I want to know is that, does Lord Voldemort have legs or a snakelike body using which he slithers around?

Oh I mean, he certainly has feet, for example,

He paced the room, kicking aside the goblin's corpse as he passed, and the pictures blurred and burned in his boiling brain: the lake, the shack, and Hogwarts -

'SILENCE!' cried Voldemort, and there was a bang and a flash of bright light, and silence was forced upon them all. 'It is over! Set him down, Hagrid, at my feet, where he belongs!'

Harry felt himself lowered on to the grass.

'You see?' said Voldemort, and Harry felt him striding backwards and forwards right beside the place where he lay.

Harry Potter and the Deathly Hallows - p.585 - Bloomsbury - Chapter 36, The Flaw in the Plan

He still had a human form. He'd just been somewhat mutilated by his Horcrux making and general heinous acts.

'...Lord Voldemort had seemed to grow less human with the passing years, and the transformation he had undergone seemed to me to be only explicable if his soul was mutilated beyond the realms of what we might call usual evil ...'

Also, just to movie-canon this answer up a bit, here's a still from Harry Potter and the Deathly Hallows - Part 2 showing Voldemort's actual feet as he walks among the Gringotts goblins that he slew on learning that Harry was hunting Horcruxes.

The best image I can find of Voldemort's full body is actually of an officially licensed sculpture from Gentle Giant. As you can see, Voldemort has feet. Thus, he does not have a snake body.

(Or he has the world's strangest snake body ever.) 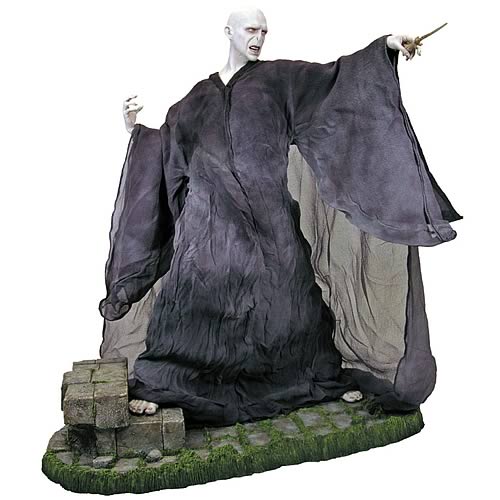 You can also see feet in this screencap of Voldemort after his battle with Harry. 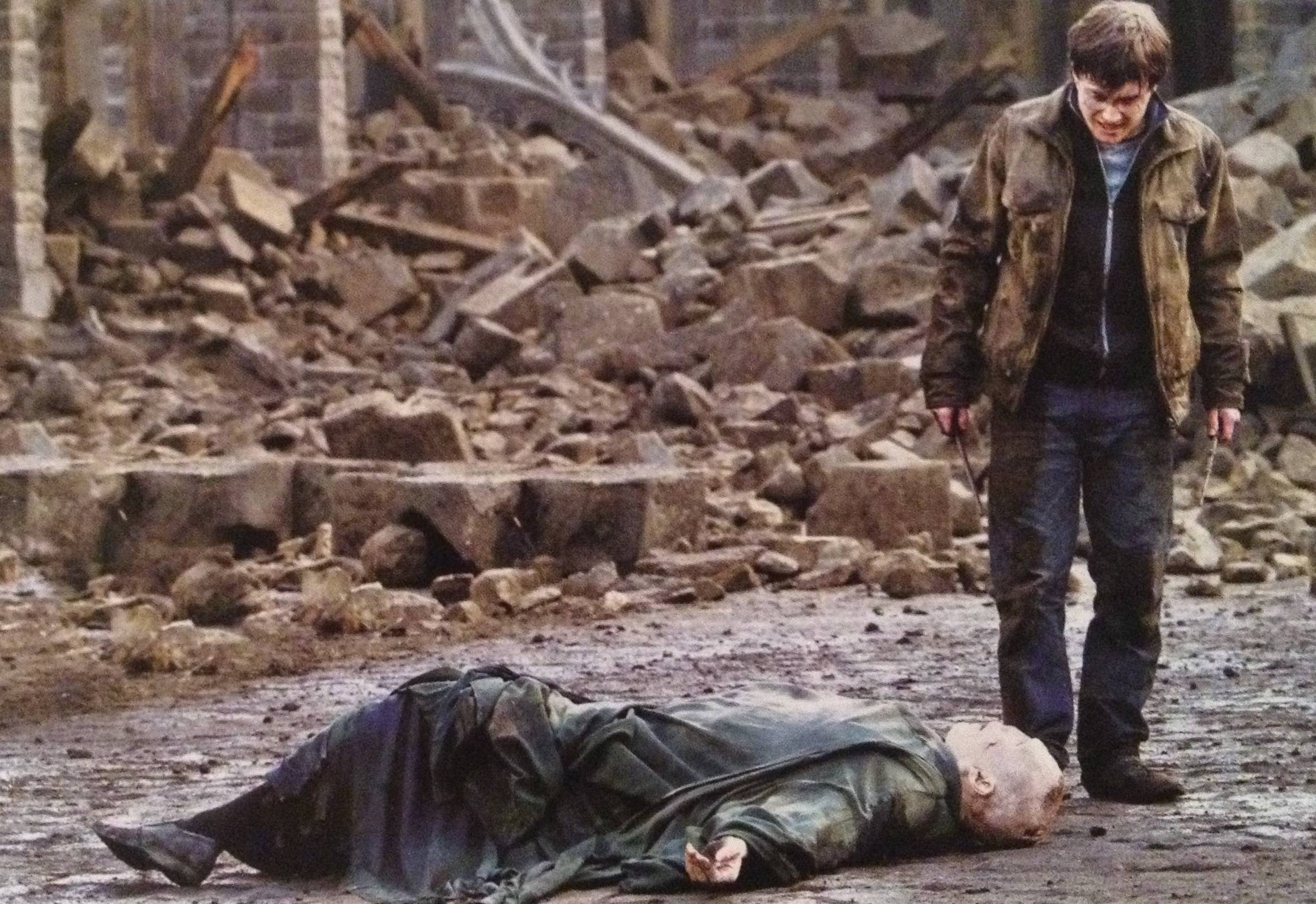 The Dark Lord’s outline was of a man, he had legs, and walked.

When the Dark Lord rises up from the cauldron, before he has his robes put on, Harry sees him having the outline of a man. That would mean the basic shape of the Dark Lord wasn’t visibly different from the average man. Presumably this would include having legs.

“But then, through the mist in front of him, he saw, with an icy surge of terror, the dark outline of a man, tall and skeletally thin, rising slowly from inside the cauldron.”
- Harry Potter and the Goblet of Fire, Chapter 32 (Flesh, Blood and Bone)

The Dark Lord then steps out of the cauldron, which would be impossible with a snakelike lack of legs or feet that he could use to step out of it with. He’d need legs to step out.

“The thin man stepped out of the cauldron, staring at Harry … and Harry stared back into the face that had haunted his nightmares for three years.”
- Harry Potter and the Goblet of Fire, Chapter 32 (Flesh, Blood and Bone)

He’s later described as walking, which is again impossible without legs or feet to walk with.

“Voldemort laughed again. Up and down he paced, looking all around him as he walked, and the snake continued to circle in the grass.”
- Harry Potter and the Goblet of Fire, Chapter 32 (Flesh, Blood and Bone)

Therefore, though his facial appearance was snakelike, he still had legs and feet.

I'm going to say he's got legs, I'm sure throughout the books he's described as walking at some point. If he had a snakelike body I think J.K would have said so. Also remember he was a least born a human I don't think he could have altered his body that much.

It's worth mentioning that, in Harry Potter and the Cursed Child, it is revealed that Voldemort

has a (fully human) daughter.

The fact that she is fully human and shows no signs of being part-snake indicates that Voldemort, even though he does have a snake-like eyes and nose, is fully human himself. He has a damaged soul, yes, but still his is an otherwise normal human body.

Despite the other answers providing citations that indicate that Voldemort has feet and walks, in Deathly Hallows when Harry has an unprecedented view of Voldemort's movements Voldemort is frequently described as "gliding". One time he is actually explicitly described as "slithering". Thus, even if Voldemort does not actually have the physical body of a snake, his movements definitely evoke a snakelike body (and that is presumably the image the author wished to conjure).

On the other hand, having legs is specifically given by Fred Weasley as the characteristic that distinguishes Voldemort from a snake:

"Agreed," said Fred. "So, people, let's try and calm down a bit. Things are bad enough without inventing stuff as well.For instance, this new idea that You-Know-Who can kill with a single glance from his eyes. That's a basilisk, listeners. One simple test: Check whether the thing that's glaring at you has got legs. If it has, it's safe to look into it's eyes, although if it really is You-Know-Who, that's still likely to be the last thing you ever do."

71
What really happened to Voldemort's nose?