Ask Question
Asked 7 years, 5 months ago
Modified 6 years, 7 months ago
Viewed 3k times
15
This question already has an answer here:
Book about a kingdom invaded by another world (1 answer)
Closed 3 years ago.

This morning I was riding in the train when I heard two fellows discussing an upcoming movie. They likened it to The Lord of the Rings with orcs and elves and (I think) magicians etc. They also mentioned that it is a story that originally appears in books. I've been trying to figure out what books these are, because I am interested in potentially reading them.

Below are all the details I can recall:

Like I said, I heard this from 2 blokes in the train, and I was not about to walk up to them and ask what story they are discussing. I hope I've gathered enough details for someone to help me identify the story.

Oh, I just recalled one last thing. There was something about a queen or some other important woman who is apparently a red head.

This sounds like Raymond Feist's Magician (and other books by him set in the same world). There are "dark elves" (aka moredhel) and many different gods. One of the two main characters, named Tomas, gets stuck with an ancient being inside his body which he's eternally fighting.

I haven't heard anything about this book being made into a film though, so it could be something completely different.

Perhaps the movie Seventh Son? The lead/protagonist is named Thomas. And magic abounds in the form of various types of witches. No elves as specifically named, but some of the characters/outfits do look kinda like them, mostly dark haired. Some of the monsters may be considered orc-like.

Based on the first book in the Last Apprentice series, also known as The Wardstone Chronicles written by Joseph Delaney.

"Oh, I just recalled one last thing. There was something about a queen or some other important woman who is apparently a red head."
The big bad of the movie and the first book is a malevolent witch named Mother Malkin who happens to be portrayed by the redheaded Julianne Moore. 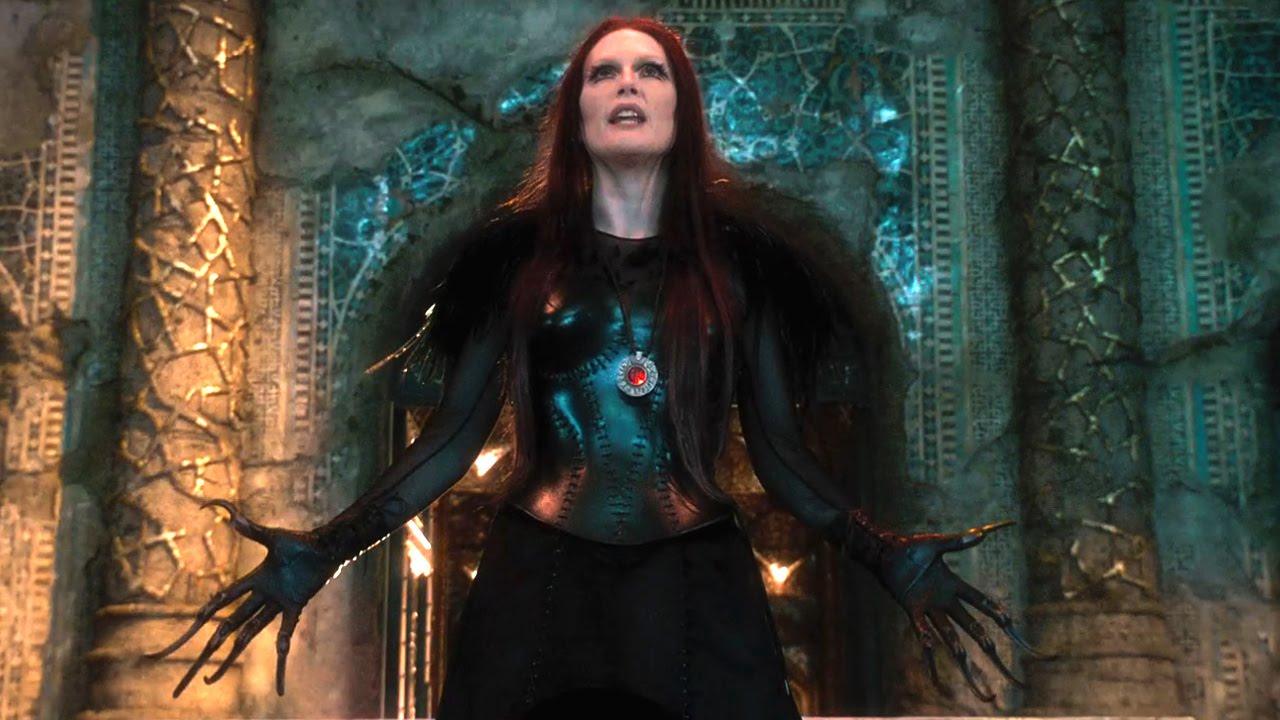 Young Thomas is apprenticed to the local Spook to learn to fight evil spirits. His first great challenge comes when the powerful Mother Malkin escapes her confinement while the Spook is away.

There are a group of "Old Gods" , ( Golgoth, The Fiend, Ordeen, The Bane, Aphrodite, Artemis/Hecate, Hephaestus, The Morrigan, Pan (The Horned God), Siscoi, Zeus)

The Old Gods were beings who controlled different elements and aspects of life in the ancient world. However, they were slowly forgotten until almost none remembered them. However, many of them are still remembered in the minds of witches and necromancers. Also the Old Gods seem to be remembered by old stories and myths from long ago. The greek gods are also counted as the Old Gods as well. Some believe that the Old Gods are good, but in reality they are pety and cruel and plague mankind.

Maybe the World of Warcraft movie.

the "Red elves" - Blood elves from the game.

thommas?? - maybe the Thomas from the franchise too.

There is magic and Elves and Orcs in Warcraft movie.

8
Book about a kingdom invaded by another world

12
In what story do bird-sized flying insects threaten the survival of the human population on Earth?
4
Which film had "See something, say something" billboard with Muslim woman's face?
6
Short story about large "worms" that are used to ferry people around inside of them
8
Red-haired woman bethrothed to silver-haired prince, they are in charge of an island?
1
Sci Fi novel - Evil man named Cotton in colony, red licorice, wasps
7
I need help identifying a Celtic fantasy/romance story involving a Lord and a young girl
12
Looking for an Alternative, Satirical Lord of the Rings Essay
10
SF short story about a person who realized that everyone around is sleeping/dreaming
5
A manga about a demon lord job with a dark-skinned elf woman