What race is Drax the Destroyer's Body?

So in the comics, Mentor and Kronos put Arthur Douglas's spirit into a new, more powerful body in order to help defeat Thanos, but (speaking as someone who hasn't read the comics but is interested in the back story of the character) is there any evidence to suggest what species Drax the Destroyer's body is? Is it just a modified human body? Or is it alien?

Drax the Destroyer started his career (in the Marvel Earth-616 canon) as a Human spirit tied to cosmically-enhanced soil. He would later be killed and reanimated with a body that appears human with strange sigils on his shoulders and/or back. Drax in the Marvel Cinematic Universe is not the same character that appears in the canon Marvel Comics Universe. In the Guardians of the Galaxy franchise, Drax is a member of a primitive and as yet unnamed species who lack the ability to easily comprehend metaphorical statements.

In the Marvel Cinematic Universe, Earth-199999

Drax is a humanoid of an undetermined species who has through the use of technology or perhaps ritual scarification, scored an image of various skulls and other death-oriented iconography on his body. A closeup of said tattoos reveals the ornate and macabre nature of the images. Given that his people are considered technological primitives, scarification is the more likely source.

Drax the Destroyer was an ordinary human, Arthur Douglas, who was killed by the Mad Titan, Thanos. Sensing an imbalance in the universe, the abstract entity Kronos, brought back to life and empowered Douglas with what he believed would be sufficient power to battle and destroy Thanos. 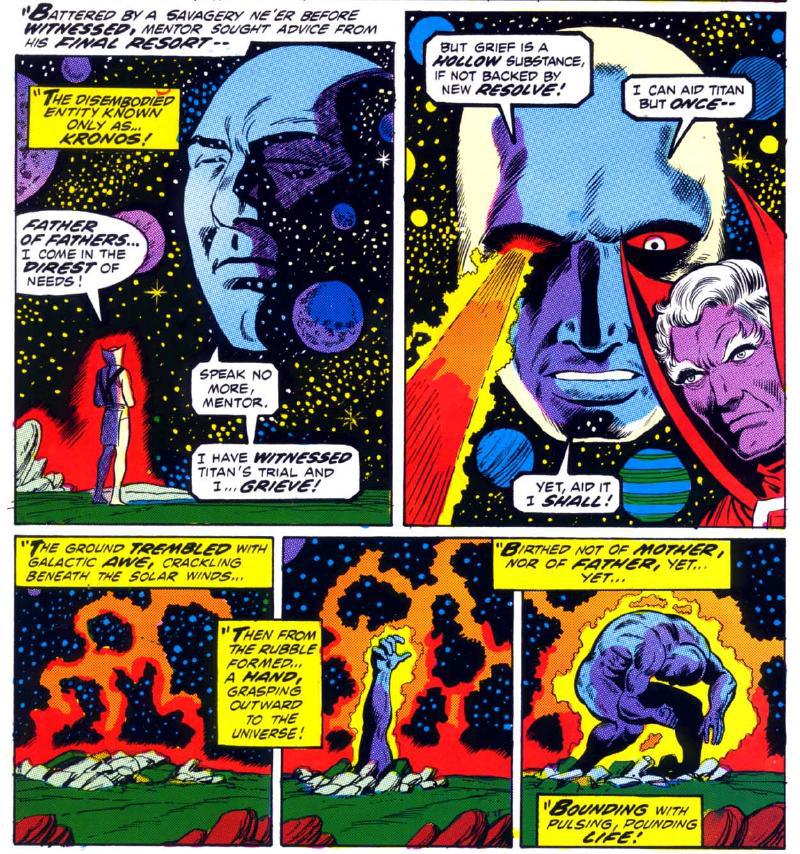 Note the skull iconongraphy which shows up on all the Destroyer designs from this period. The skull motif is worked into the new prosthetics as well. Drax on the left was the calm and cerebral version, the one on the right, was powerful but childlike in intelligence. 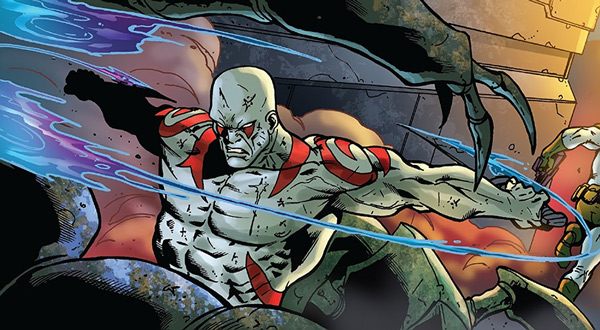 While Arthur Douglas was originally a normal human, the current comic version of Drax is made of... dirt + a whole lot of magic.

Kronos and Mentor then fashioned a humanoid body from the Earth's soil, granted it superhuman powers, and cast Douglas' spirit inside it. Thus they created the being who would become known as Drax the Destroyer.

It can be noted that the body created by Kronos and Mentor was green and looked vaguely Skrull-like. 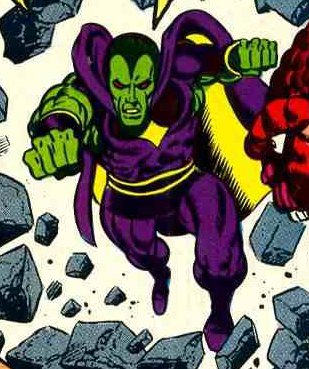 He was later killed and resurrected. When restored, his appearance had changed with no explanation. In particular, he now sports his inexplicable trademark tattoos 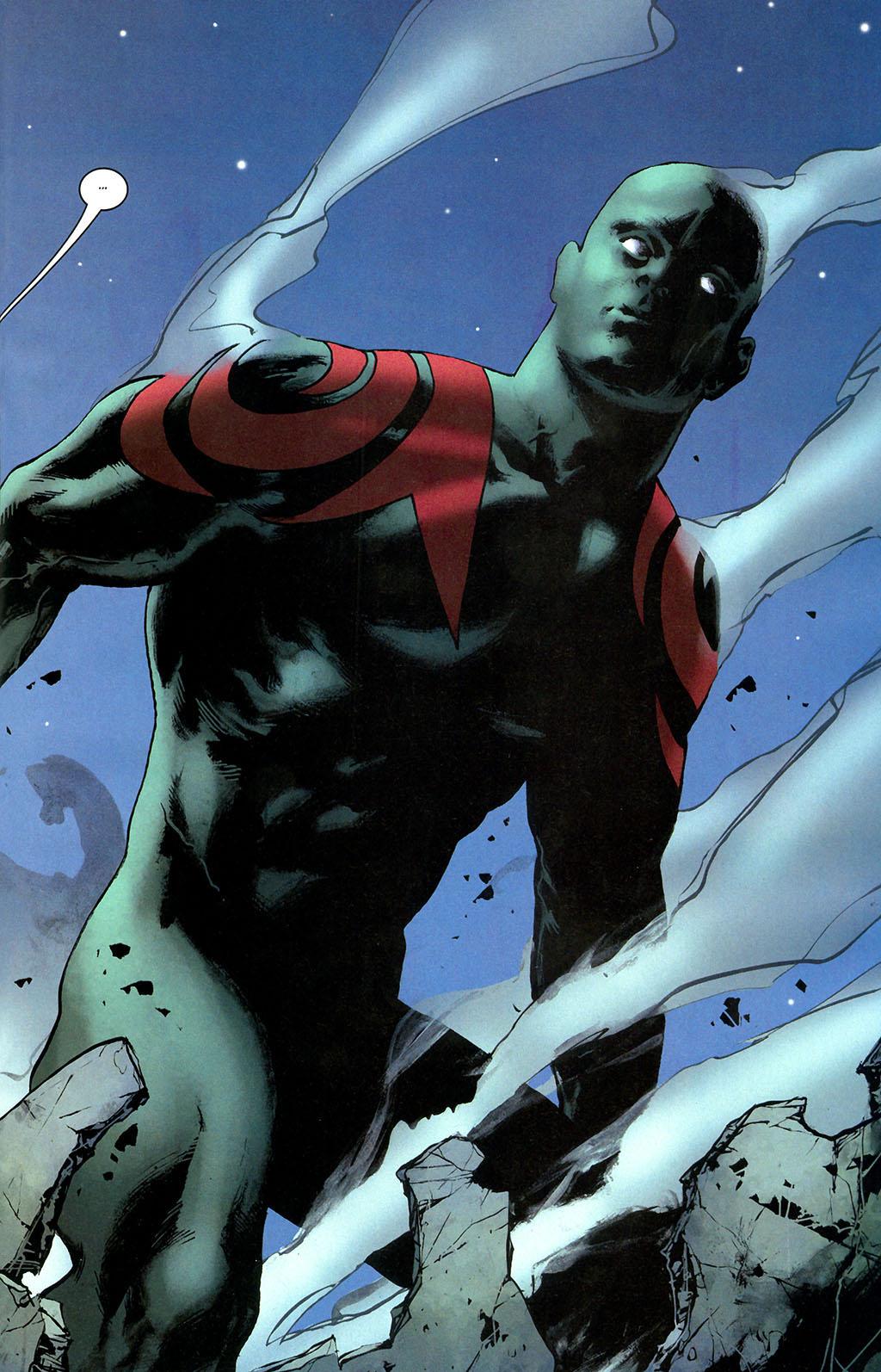 His origins and/or species is different depending on which Marvel continuity you reference:

Comics Version: One of a kind creation

Within the comics 616 continuity, Drax is one-of-a-kind. Mentor and Kronos put the soul of dying human Arthur Douglas into a newly-created body, intended as a weapon against Thanos. He was later killed and afterwards regenerated into a new body that appeared similar, yet slightly different from the first. The panels below are from Captain Marvel #32 (February 1974), which is a retelling of his origin: 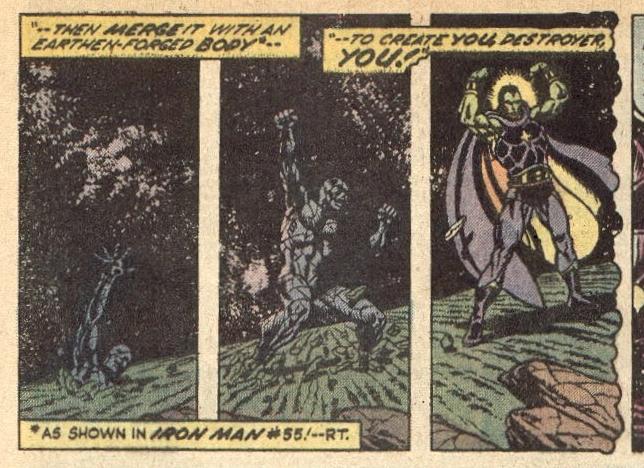 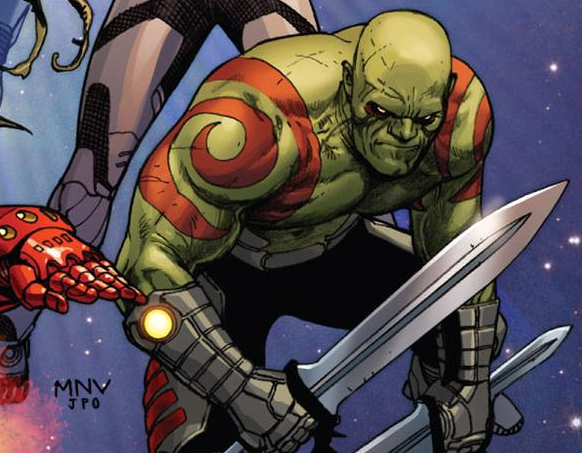 The MCU version of Drax is apparently a member of a species that has no concept of metaphors, and therefore take everything literally. This version of Drax is based on the second appearance of Drax in the comics. His red tattoos, appearing similar to tiger stripes in the comics, is here presented as tattoos or ritual scarification which tells the story of his life. During the lineup scene, it was shown that the Nova Corps has no knowledge of his species or homeworld.

It's very possible that we will learn more about Drax in the upcoming sequel. 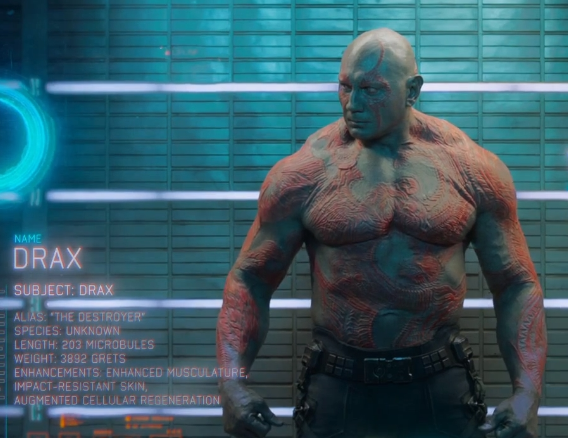 For a more complete look at Drax's origins and history, please see his Wikipedia article.

Not the answer you're looking for? Browse other questions tagged marvel drax-the-destroyer or ask your own question.

16
Is it known what the markings mean on Drax The Destroyer's body?
15
Did the original Drax have trouble with metaphors?

51
Why did Drax call Gamora a whore?
16
Is it known what the markings mean on Drax The Destroyer's body?
15
Did the original Drax have trouble with metaphors?
22
What race (species?) is Star Lord's dad?
17
Why was Drax in the Kyln?
8
Why does Drax call them Harbulary batteries?
23
Has Drax in fact mastered the ability to stand so still that he becomes invisible?
6
What is Groot's body made of?
3
Is the portrayal of Drax in the MCU true to the comics?