Is “the Man Without Fear” just a marketing term for Daredevil, or does it reference something?

I'm fairly well-versed with comics lore, but I'm not very familiar with Daredevil. I know his basic powers/abilities, but I'm interested in learning more in the run-up to the new Netflix show.

One thing I've noticed is that Daredevil is often referred to as "the Man Without Fear." Now certainly, Daredevil is quite brave, but from what I can tell he's not particularly brave relative to Captain America or Spider-Man or any other A-List Marvel hero.

Is that line just a catchy subtitle, like "the Caped Crusader" or "the Man of Steel", or does Daredevil have some special relationship with overcoming fear that I haven't come across yet? At least Batman and Superman's subtitles give interesting information about the character: Batman is on a moral quest to stop crime, Superman is incredibly strong and tough.

Is there some reason why Daredevil deserves the title "the Man Without Fear" more than any other hero?

Daredevil's nickname (which appears as the tagline on the cover of Daredevil #001) is well chosen. Despite his blindness, he regularly jumps into situations without the faintest idea what he's getting into.

He's been called the "Man Without Fear" since his introduction. In the classic serials, the narrator stresses his fearlessness at least once every two pages... 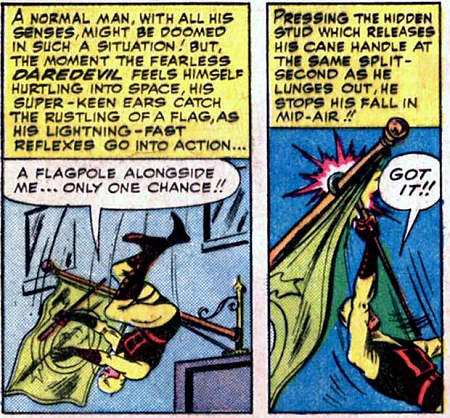 He's also not above wise-cracking about the risks he's taking: 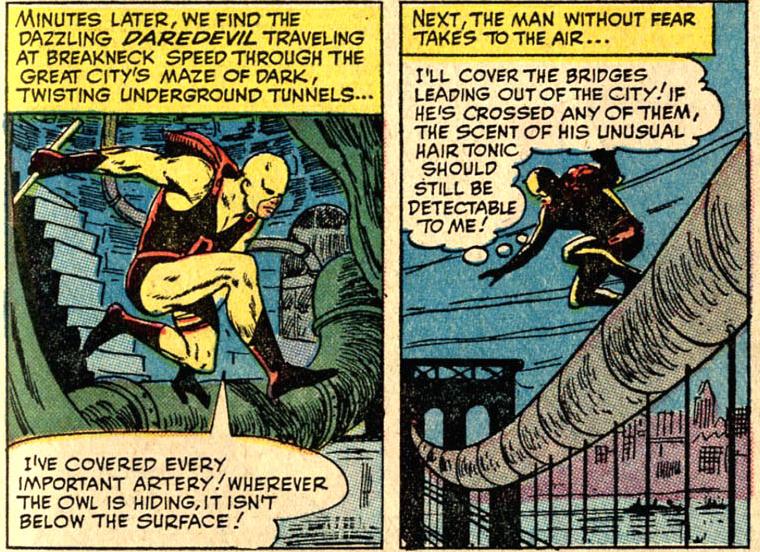 It's just his subtitle, although it matches well with the name of Daredevil, being someone willing to take great risks. Add to that that the combination of his physical abilities and his enhanced senses allowing him to "see" his environment in ways that those around him cannot allows him to pull off feats such as seemingly launching himself off of a roof with no way of catching himself. E.g., he knows, via his radar sense, that there's a flagpole, but to the eyes of anyone watching, it's a man fearlessly leaping backwards off of a roof to a seeming death.

It's part of a wiki entry, but this is partially explored in his Comicvine entry:

Daredevil's original design was reminiscent of a circus acrobat. His name seems to come from the fact that a circus acrobat appears "fearless" when performing potentially life threatening feats. Thus the title "Man Without Fear". In this case Matt takes his acrobatics to more risky heights.

Daredevil's nickname is "the Man Without Fear".

There were also multiple comicbooks / tv shows that depicted the same name.

Edit: Even as a person commented the first issue of Daredevil had the term in the title.

In Daredevil's origin story, he fearlessly pushed a blind man out of the way of an out-of-control truck, but in typical Marvel irony, the truck spills radioactive containers and one causes his own blindness. Stan Lee - bless 'im - was never much for subtlety!

As others have said, he subsequently hones his senses, acrobatic and fighting skills such that, despite his blindness, is then able to throw himself into situations that much braver (and seeing) men might balk at.

The key point to my mind is that his fearlessness is neither part of his super powers (enhanced senses) nor a personality trait that is the result of having super powers - it was something that was already part of him as a teenager and is what caused him to risk himself to save another, thereby creating Daredevil.

If you've seen the Daredevil/Batman series, Scarecrow gases Daredevil and it didn't affect him because Daredevil said that he overcame all his fears.

Not the answer you're looking for? Browse other questions tagged marvel names daredevil or ask your own question.

22
Did Chris Claremont have to change his long-term plans for the X-Men in the early '90s?
14
Reference for the first name of Sirius Black's mother, known from her portrait: Walburga
12
Reference for the first name of Neville Longbottom's grandmother: Augusta Longbottom
3
What’s the reading order for Superior Iron Man?
1
Is 3000 a reference to Iron Man in the comics?
20
Why does “Daredevil” use the 48-star US flag?
10
Looking for the comic book where Spider-Man was [mistakenly] addressed as Super-Man