Why was Barry not burned?

In the climax of episode 10, Barry goes up against Heatwave and Captain Cold simultaneously. During the fight he and Wells determine that having Barry take the brunt of the attacks is what will eventually win him the fight. My question is, why did the flames from Heatwave's gun not burn Barry or his uniform? The uniform is not fire proof but rather fire and friction resistant as stated by Cisco. Also, earlier in the episode it's made clear that Heatwave's weapon produces a large amount of heat and fire. So how did Barry escape without any burn marks and with his suit in tact?

Barry himself has an "aura" that protects his skin from heat & friction. This hasn't been touched on very often in the series, but is has been mentioned once or twice. His suit, while resistant to heat & friction, is nowhere near as impervious as Barry's skin. In fact, as shown below, the upper torso and arms of the suit are quite charred immediately after the scene where Cold and Heatwave's weapons cancel each other out.

As seen in S1E14, "Fallout", both Barry AND his suit are far more susceptible to chemical burns such as the acid rocket used by General Eiling's men. The suit shows much more damage afterwards than it did from any fire-based attack in previous episodes, and Barry himself ends up nursing a large chemical burn under the worst area. 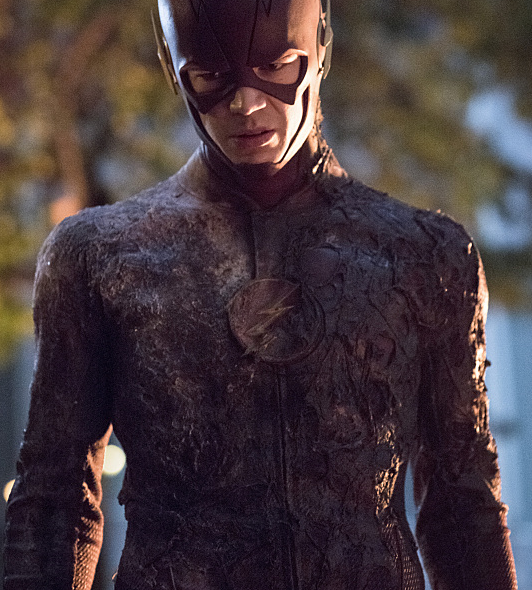 4
Did Barry actually lose his powers?
1
When did Barry learn to do this?
11
How did Barry outrun a lightning bolt?
5
Why did future Barry ask the present Barry not to save his mom?
9
Why weren't there two Barry Allens in Flashpoint Season 3?
4
Why does Zoom keep thinking he and Barry are same?
2
Where is Barry Allen of Earth-X?