Is there a case of a Force user using the Force to curve a lightsaber blade in Legends?

This is me trying to track down a vague rumor from childhood, so be warned. When I was in elementary school, somewhere in the late 1980s to the early 1990s, I remember being told that Emperor Palpatine, in expanded materials, had a lightsaber with a curved blade. Specifically, while it was nominally a normal lightsaber, he used the force to curve it to show off his power or for some tactical advantage like being able to to circumvent an opponent's guard (the normal reason for a curved sword, concentrating the force of a blow, allowing more powerful slashing blows with a lighter weight, does not really apply to a lightsaber). They swore that it was in the books — I want to say that it was somehow tied into an idiot savant weapon designer who mumbled new designs in his sleep, but was functionally retarded otherwise.

I've found a few references with people claiming that this was supposed to have been introduced into Episode 2. And there are other people asking after canonical references. Obviously, this is something that has heavily weighed on people's minds, if only because people like to think of ridiculous lightsaber variations.

The closest match I've found so far is the Darksaber, which has a curved edge (somehow), but that was introduced way later than the timeframe I remember hearing about this. It's also possible that they might have been thinking about an Echani blade or the like, but the description of it being curved by the means of the force doesn't quite match there. It's also possible they were just making it up, I guess. It was elementary school and goodness know we all made some pretty huge fibs back then.

You may be thinking about the original Force Wars on Tython. This was after the force had just been discovered, and was prior to the creation of the lightsaber, however, the war was fought using "force-forged swords" that were strengthened using the force. They were metal, and had many varieties (many very similar to standard lightsabers), but one of the most prevalent forms looked like a Katana, which has a curved blade.

Just to provide another data point, Darth Noctyss is depicted in Dark Legends wielding a curved lightsaber, but it sounds like it might have been added by the artist. 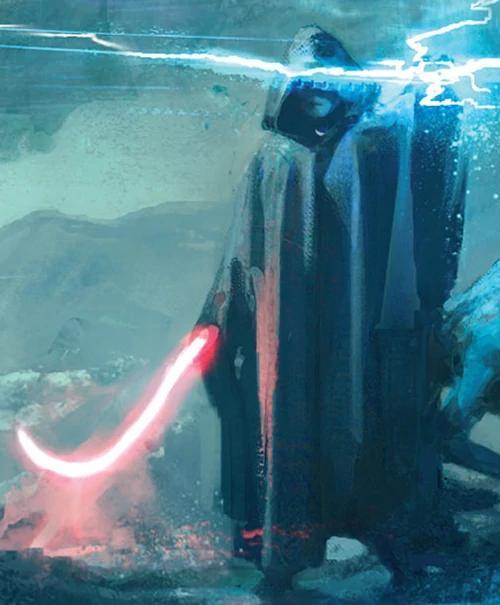 "As this story was one of the last to be added, and due to approaching printing deadlines, I had to proceed with the illustration without knowing whom or what the main characters were. What I did know was that this story took place on Exegol and was going to have a strong Dr. Frankenstein and Ygor vibe. At the time, I only had the trailer visuals to go off of. Inspired by a screenshot, I built up the scene and shrouded our Sith in a hood to hide their identity. With a bit of Force lightning to showcase the villain's power, I was able to increase the drama in the composition. The curved saber was added later, and if I am not mistaken, is specific to a particular Sith."
―Grant Griffin

Not the answer you're looking for? Browse other questions tagged story-identification star-wars lightsaber star-wars-legends or ask your own question.

27
Why doesn't someone try to turn ON/OFF enemy's lightsaber using the Force?
17
How is Kylo Ren's lightsaber able to have a cross at the hilt?
14
What is the shape of a lightsaber blade?
7
Children's book series about tiny people
47
How is it possible to do round swings with a lightsaber?
20
Why was the colour of Luke's lightsaber changed from blue to green between the trailer and the release of Return of the Jedi?
8
Children's book about a cat accepted into Heaven
5
How much did the average citizen know about the Force and Force-Using Organizations? (Canon or Legends)
3
How would the Darksaber deflect blaster fire?
8
What is the longest lightsaber blade ever seen