Five teens have rings that give them elemental powers

It was nearly 2003 or 2004 when I used to see that cartoon show almost everyday on Fox Kids. However, I was of 6 or 7 years at that time and in spite of watching that show regularly I had completely forgotten its name and much of the characters.

What I still remember is that there were five persons (some young guys and girls) that were all having a ring with some special powers (something like water, wind, earth etc). Other than these five persons there was also another superhero (probably the central protagonist of the show and the torch bearer of these five young people). He was having some extra special powers like flying, strength, etc. As far as I remember he was addressed as Captain.

And in a whole this show was based on saving the environment from the evil nature perishers. Any ideas? 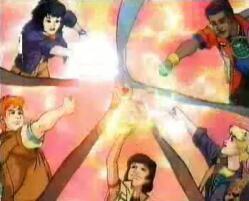 8
Book search: earth cultures recreated on other planets, organization that rescues them
9
Fantasy novel where characters have gemstones implanted in their bodies. Female baddie is trying to 'harvest' them
4
Anime where the main character has a pet squirrel and her friends have powers activated by devices on their wrists
13
Sci-fi cartoon show with an elite soldiers group
6
Children's book series: a girl is unique in that she can bond with all animals, can use their powers
8
Animation from the 2000s about characters with special stones/orbs that give them power. One was a boy with a sword, and another was a talking dog