90s teen novel about an alien invasion in a small farm town. Showdown in the school at the end of the novel

I read this story in the early 2000's, found it in a hospital gift shop. The story centered around a small town where the kids begin to notice that the adults are acting strangely. I remember there being some kids that lived on farms. Only the kids knew about the invasion and no one believed them. As the aliens realized that the kids were on to them, they were creating accidents to kill the kids. I remember one part where one of the kids died because he was run over by a tractor. There might have been a reaction from the aliens to water, if I remember correctly. The final showdown took place in a school (the high school I think?) where the kids were able to defeat the aliens. The kids were not high school-aged, more like early Tweens-teens. The cover was a little on the cheesy side, showing the kids with the town in the background, and the green alien lights.

This book has sentimental value. I've been looking for years, but can't find much without a title. Thanks.

This sounds a bit like it might have been a novelization of the movie "The Faculty" from 1998. The following Wiki site has a promotional movie poster cover that matches what you describe as the book cover. As you note, only the kids are aware that something is going wrong and start getting killed off. Too, the showdown does occur at the school with the kids being able to defeat the alien leader. Finally, the aliens in the film are found to have a weakness due to:

A drug that acts as a diuretic that removes water from them.

However, I don't specifically remember a scene with a tractor running over a kid. 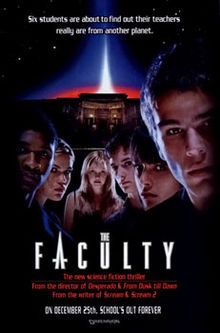 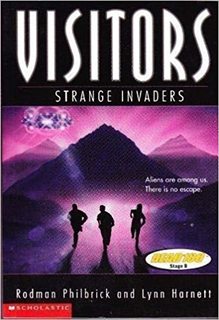 I was looking for the same book and found this thread via Google. It's the Visitors series by Rodman Philbrick, starting with Strange Invaders.

Twelve-year-old twins Nick and Jessie are woken up in the middle of the night by a blazing white light followed by a loud explosion. As they rush to the window, rain suddenly begins pouring down, and the water starts to glow. It is the strangest thunderstorm they’ve ever seen, and it stops as quickly as it started.

Nick has a feeling it may not have been a storm at all, but visitors from another planet. When he and Jessie decide to investigate a strange sound downstairs, they find their mom and dad digging a hole in the basement. At least, they think it’s their mom and dad. But since when does their mom let them eat all the junk food they want, and why isn’t their dad going to work?

Nick and Jessie know something is wrong, and if their hunch is right, their parents’ bodies have been taken over by aliens. It’s up to Nick, Jessie, and their best friend, Frasier, to solve the mystery and protect their town from an extraterrestrial threat.

I've been looking for the same book for years. I read it as a kid on a trip to Disney World. This is the closest book I've found that vaguely feels like the same as one I read, but I don't know cause I don't really remember it that well. I always thought it was more of an obscure book, kinda let down if it was just another animorphs.

Not the answer you're looking for? Browse other questions tagged story-identification childrens-novel alien-invasion or ask your own question.