How do the Death Stars retain atmosphere in the landing bays?

In episodes IV: A New Hope and VI: Return of the Jedi we are shown ships landing in Death Star 1 and Death Star 2 landing bays seemingly exposed to the vacuum of space, and yet non-suited Imperial personnel are seen standing on deck (for example in about the 3rd minute of Episode VI). How does this work in-world?

If there are some kind of shields, what happens to them when the ships cross the threshold? Why don't we see de/repressurization?

What, in short, is the deal?

TL;DR: The Star Wars galaxy possesses magnetic shield technology, in which a molecule-thin magnetic field prevents air from passing through it, yet somehow allows larger mass through.

The technology used to protect hangars from open space advances somewhat during the Star Wars saga, so I'll discuss both types of technology that we see on-screen.

In the original trilogy, hangar bays (as well as any other areas open to space) are sealed using a magnetic shield. The magnetic shield is an electromagnetic field that prevents gases from passing through it, but not solid material. In most cases, a vessel can pass through the shield without requiring deactivation. This allows hangar operations to continue without interruption.

However, in some cases, such as when a ship has a polarized hull which would interfere with normal shield operation, the hangar must be cleared and the shield deactivated before the vessel can enter the hangar. I don't have it handy at the moment, but this was specifically discussed in one of the EU novels.

The shield itself cannot be seen, so areas protected by a magnetic shield have lights set around the opening to indicate shield activation. On Imperial bases and ships, a bright white light is used to show that the shield is on. Some other versions of the technology use a blue light instead. 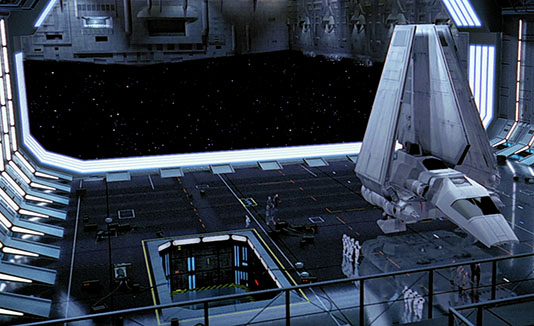 Note that earlier versions of the shield were an actual shimmering "force field". This earlier version did not require any sort of visual indicator since the shield itself could be plainly seen. The older style of shield, however, had to be disabled before a ship could pass into or out of the hangar bay. This is clearly seen during the Battle of Coruscant in Episode III, during which Anakin must destroy the field generator before he and Obi-Wan can fly into the ship's hangar and begin their rescue of Palpatine. 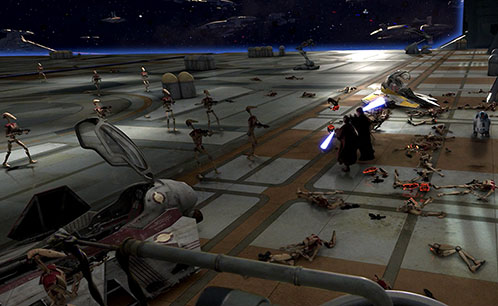 In the Legends novel "Planet of Twilight", Leia finds herself secured in a mansion on the planet Nam Chorios. A desolate world, the owner of the mansion - one of the wealthiest men on the planet - apparently uses magnetic shielding to maintain a more humid environment indoors... despite having open windows that let in sunlight. In the passage below, Leia notices this as she walks in from a balcony:

The air was softer indoors, subtly modified to escape the piercing dryness. That meant magnetic shields on the doors and windows - not cheap - and some kind of mist generators in the ceilings.

Since she had just walked through the open doorway from an outside balcony, this seems to prove that magnetic shield technology allows objects of sufficient mass to pass through them, yet somehow prevents air or water molecules from passing through the same opening.

Furthermore, Nam Chorios was considered a backwater world. Nobody on the planet - including the owner of the mansion - had access to modern technology. This would indicate that the magnetic shield technology had been around for quite some time (despite still being expensive).

The technology is mentioned again in the Legends novel "Legacy of the Force: Exile" as Lando watches the Falcon land in a hangar bay:

He watched as the Falcon slowly approached. As frail as she looked, he half expected her to bounce off the atmospheric shields that kept the vacuum of space at bay, but she floated gently in through that negligible barrier.

The novel takes place approx. 40 years after Episode VI, so this idea of a magnetic field barrier that keeps in the atmosphere remains consistent for nearly a century across both movies and novels.

They were sealed with a magnetic field:

"Clear Bay 327. We are opening the magnetic field." (An Imperial on board Death Star I, just prior to the MIllenium Falcon landing)

Many also had emergency airlocks and blast doors in case the field failed. One example of this can be seen in The Phantom Menace as Anakin blows up the Droid Control Ship (13:45 in the linked video):

Probably similar in concept to what is seen in Star Trek TNG. Although in TOS, the hangar deck was depressurized for shuttle arrivals and departures, in TNG there are trekbabble shields which activate just prior to the exterior doors opening, (there is at least one scene where it is clearly depicted) which are able to maintain a shirtsleeve environment in the bay while shuttles can freely arrive or depart. Mind you, the Star Trek folks probably took the idea from Star Wars - I believe the relevant Star Wars scenes appeared well before TNG premiered.

This a technology as old as the Old Republic, it was discover during ofr before the Mandalorian war; what I do know is that the heavy Centurion-class battleship was equipped with some. This technology is called a containment field, and it even allow the atmosphere to stay in the ship when small breaches occur...

The ravager ship of Darth Nihilus is a phantom space junk, driven by the sheer will a of a half-dead planet-eater vampire addicted to Force drain. He has his slowly dying crew sustained by that kind of containment field, because the ship is in ruins...

In Republic Commando you can overload some device within the hangar bay to cause the containment field to become dangerous for everything that come near-by.

1
How are (landing) doors kept open in Star Wars?
11
Why was Darth Vader's cape fluttering at the end of Rogue One?
8
How was the Resistance able to rescue this character?
11
Can all proton weapons penetrate shields? Why?