Why didn't Vader see Luke as a threat?

When Vader wanted to put Luke in the carbon-freezing chamber in The Empire Strikes Back, what made him so confident that Luke would somehow get into the freezing chamber, either voluntarily or involuntarily?

Since he had said earlier the Force is with you but you are not a Jedi yet, didn't he fear that since Luke is younger and more agile, Luke might best him, that in fact he may be in danger instead?

Do the movies or books explore this any further?

In the context of movies-only at the time, when Vader conceives of his plan to trap Luke, he has never personally confronted Luke. His only encounters were in the Death Star trench and being on the same battlefield on Hoth.

As such, he has no first-hand knowledge of Luke's abilities. At this point, he doesn't even consider Luke to be a Jedi.

The Force is with you, young Skywalker. But you are not a Jedi yet.

Vader, however, is a a trained Jedi and the Dark Lord of the Sith (and depending on how much you believe of Lucas' pre-planning, responsible for the death of countless Jedi). Additionally, he fully believes that the Dark Side is stronger.

While Vader may have been unnecessarily overconfident in the outcome, it's not without reason.

According to the latest statement from the Lucasfilm Story Group, the new 2015 Marvel comics are at the same level of canon as the original films. That being said, we now know that at the point that Vader met Luke in Cloud City, he'd already fought him once before at the Imperial weapon factory on Cymoon 1 (as seen in Marvel Star Wars #002).

In their first encounter, he knocks Luke over without injuring him, then uses the force to disarm him. Luke's prowess is described as "pathetic". As a result of this fight, Vader would have been very much of the opinion that Luke was little or no threat to him. 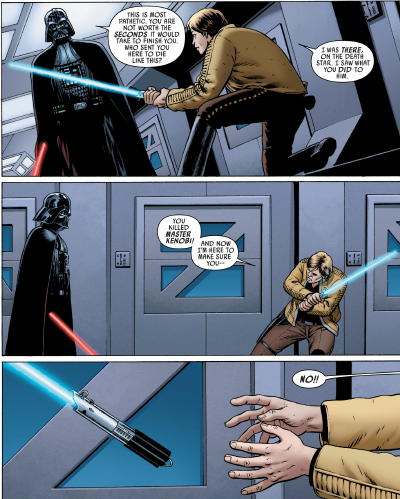 When he faced him in Cloud City he was quite surprised to find out that Luke was a lot stronger than before, courtesy of Master Yoda's training.

This is just going from the films, with a heavy emphasis on the original trilogy:

When Yoda says the Force isn't about being a great warrior, he isn't just spouting some hippie nonsense. Vader understands this, too, but from a darker perspective: He has Luke's friends' lives to bargain with, or at least he thought he did. More than that, though, at any point Vader can win the fight just by telling Luke the truth: he is Luke's father.

Vader and the Emperor both see Luke as a valuable asset, to be preserved and exploited if at all possible. Vader, however, has a strong idea that once the Emperor has Luke, he'll no longer need Vader, at which point Vader himself goes from being an asset to a liability. Not a safe position to be in when your boss likes to microwave people with his hands.

So I don't think Vader was ever intending to directly hand Luke over to the Emperor. Vader's primary goal wasn't so much to capture Luke as to keep him for himself, or at least out of the hands of the Emperor, which is, I think, one of the reasons that Vader lets him escape. If nothing else, he's preserved the balance of power.

Because the only being in the galaxy Vader is truly afraid of is the Emperor, which is why Vader doesn't just kill the sick SOB and take control of things himself. Vader, after all, isn't truly evil, he's just a guy who wants to bring order to the galaxy.

And he knows the Rebel Alliance isn't a match for a psychotic near-diety who can shoot friggin' lighting out of his hands; their assault against the first Death Star would have been a failure if it hadn't been for this one kid whom the Force seemed to exceptionally favor.

A kid who it turns out has the power to destroy the Emperor, which the Emperor himself has foreseen. And best part of it is, he's Vader's son! If they team up together they can kill the Emperor, end the senseless war, and rule the galaxy as father and son.

It's a seductive proposition, and Vader was hoping it would have the added force of having Luke and his friends securely in his custody.

By the time The Empire Strikes Back happens, the Jedi are pretty much exterminated. In fact Darth Vader kills his own master with very little effort in Star Wars when he kills Obi Wan Kenobi at the end of the film. And don't forget that in Star Wars Vader's ramblings about "The Force" are treated like magical nonsense by the Death Star staff he works with.

Heck, when the Millennium Falcon was sitting in the Death Star docking bay in Star Wars, Darth Vader alludes to sensing something when he is visually inspecting it. If he had felt the ship contained Jedi or some other threat, they could have just ejected it back into space and blown it up, right? In that film Darth Vader was just hunting for rebels and secret plans; not the seeds of a future Jedi revival.

So in The Empire Strikes Back he learns about a "new enemy" named Luke Skywalker. He is told he is a threat and he will join the Dark Side or die. I always interpreted that "join us or die" as simply passive-aggressive bullying; Luke was simply going to die.

So when Vader meets Luke he sees him as nobody. Vader in fact fights him barely moving; just using one arm and even disarming him within moments.

The fact the Luke was resilient and tenacious came as a slow surprise to Vader. And increasingly angered Vader. Just look at how calm and calculated Vader is at the beginning of the duel compared to how angry and vicious he became near the end of the duel. Why the heck won't this country bumpkin farm boy just die?

Vader was not ready for Luke because he had no idea how much of a threat this kid was. Also, keep in mind Vader had no idea that Yoda was still alive and had partially trained this kid. From Vader's perspective his former master trained a stupid farm boy and that is it. Vader killed Obi Wan so what could this kid do?

It all comes down to arrogance, underestimating the threat and only realizing at the last minute that Luke was far more than he appeared to be.

20
If Darth Vader discovered Luke was his son from the Emperor in the 2004 retconned version of “The Empire Strikes Back”, then how did the Emperor know?
44
Who/what exactly does Darth Vader believe taught Luke between the events of “The Empire Strikes Back” and “Return of the Jedi?”
62
What was the deal Lando made with Darth Vader?
70
Was Luke in “Return of the Jedi” really “better” than Obi Wan in “Revenge of the Sith?”
15
Did Vader ever learn that Luke was actually trained by Yoda?
10
Did Palpatine really think Luke could become a Jedi?
47
Why is a living creature being frozen in carbonite in “The Mandalorian” so common when it seemed so risky in “The Empire Strikes Back?”